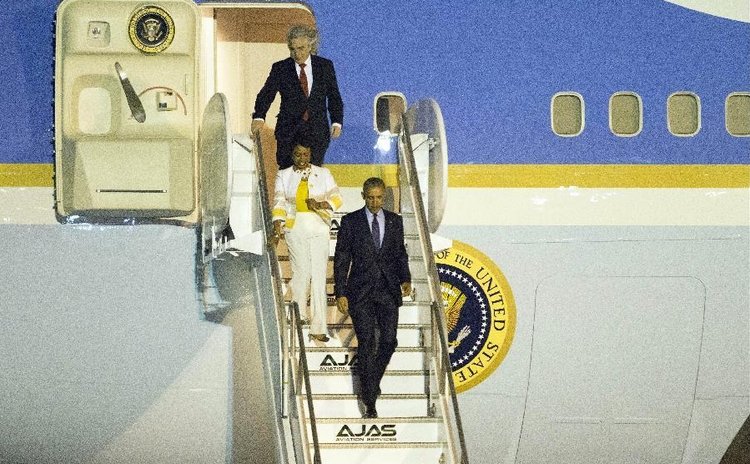 In addition to bilateral talks between the United States and Jamaica, Obama is scheduled to have discussions with Heads of State and Government of the Caribbean Community (CARICOM) on issues under the Caribbean Basin Security Initiative, according to Jamaica's Information Minister Sandrea Falconer.

The U.S. president will attend a wreath laying ceremony in honor of veterans of World War I and World War II at the National Heroes Park, and a youth forum at the University of the West Indies.

This is the second visit by a sitting U.S. president to Jamaica in history, with the first one made by Ronald Reagan in 1982.

Governor General Patrick Allen and Prime Minister Simpson Miller along with a delegation of officials greeted Obama on arrival at the airport.

Security measures have been intensified. A main street in corporate areas of Kingston, where main financial institutions, big hotels, government agencies and at least three shopping centers are located, is set to be closed for 24 hours, to welcome the visiting U.S. president.

Vendors around the National Heroes Park, which is right in the center of Kingston's downtown area, are asked to make room for Obama's tribute to veterans scheduled on Thursday.H Simpson Miller views Obama's visit as "an affirmation of the strong ties of friendship and cooperation" between the United States and her small island country.

"We are confident that through fruitful dialogue and exchanges during the visit we will succeed in further strengthening the close relations that exist at the bilateral level between Jamaica and the U.S. and between the U.S. and CARICOM," she said in a statement.

Concluding a visit here on Thursday, Obama and CARICOM leaders will leave for Panama to attend the Seventh Summit of the Americas.