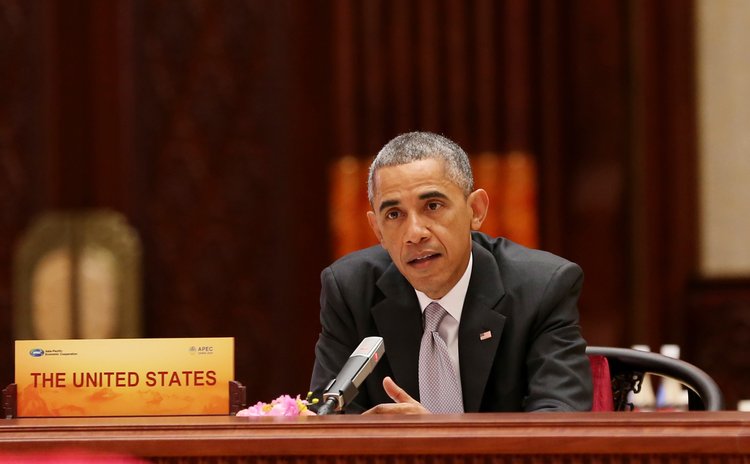 The two leaders made the pledge in a meeting at the Zhongnanhai leadership compound in central Beijing.

Obama is here to attend the 22nd Asia-Pacific Economic Cooperation Economic Leaders' Meeting and pay a state visit to China.

Recalling their past meetings, Xi said both sides have maintained close contacts via telephone calls and correspondents.

Xi said he is glad to see that both sides have achieved considerable early harvest on their drive to build a new type of relationship between major countries thanks to joint efforts from both sides.

According to Xi, both China and the U.S. have gained more understanding and are holding higher expectations over the concept of the new type of major-country relations.

The U.S. president's visit to China boasts an important opportunity to push forward such a relationship, Xi said.

He added that the two leaders should maintain regular and close communications and exchange candid and in-depth views on fundamental issues.

"Only in this way (could the two countries) comprehensively enhance mutual understanding, trust and respect, and steer clear of strategic misjudgments," Xi said.

He called on both countries to expand pragmatic cooperation, with a special focus on actively promoting pathbreaking collaborations.

Communication and coordination on international and regional affairs should also be enhanced, Xi said, in order to jointly contribute to world peace, stability and prosperity.

For his part, Obama noted that the U.S. and China boast the world's two largest economies and two energetic and innovative peoples.

Strengthening cooperation between the two countries - which have seen their interests highly integrated - could benefit people in both countries and the world by and large, Obama said.

He said he is willing to exchange views with President Xi on a wide range of issues in a timely manner, and lift the new type of major-country relations between China and the United States to a higher level.