First visit by a US President in more than 80 years 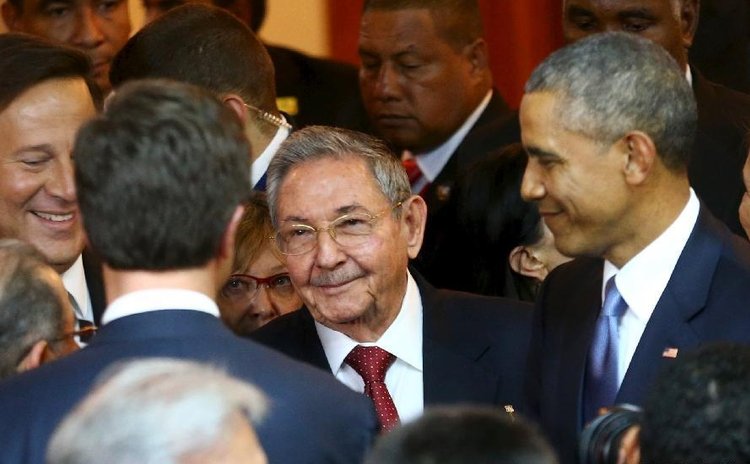 FILE PHOTO: Raul Castro and Obama at the Summit of the Americas

HAVANA, March 20 - U.S. President Barack Obama traveled to Cuba today to conduct a historic visit to the island nation, in culmination of development of relations between Cuba and the United States in more than 50 years.

A lot has happened to bring the two countries closer since the United States and Cuba restored diplomatic ties on Dec. 17, 2014.

While the rapprochement is clearly driven by pragmatic need, both countries stand to benefit, Cuban Communist Party daily Granma noted in a recent editorial.

"What our ties with the United States should accomplish is that the two countries respect their differences, and create a relationship which is beneficial to both peoples," the daily said.

Ties between the two countries have been fraught with conflict since the late 1800s, when Washington tussled with Spain over Cuba.

Spain's defeat in the 1898 Spanish-American War led to the U.S. occupation of the island and the signing of the Treaty of Paris, in which Madrid recognized Cuba's independence.

The United States established a military junta in Havana between 1898 and 1902.

When the U.S.-dominated Republic of Cuba was established on May 20, 1902, the United States withdrew troops from the island but imposed the Platt Amendment, an appendix to the Cuban Constitution giving Washington the right to military intervention on the island, which repeated in 1906, 1909 and 1913.

The amendment also guaranteed a land transfer for naval and coaling stations. The document resulted in the 1903 settlement of the Guantanamo Bay Naval Base, which is widely considered a sticking point between the two countries.

In the 1920s, following a million-U.S.-dollar-loan from Morgan Bank to the Cuban government, U.S. companies began to penetrate the main sectors of the local economy.

In addition to economic control, Washington tightened its political grip on the island country by supporting the dictatorship of Fulgencio Batista until 1959, when he was ousted by the revolution led by Fidel Castro.

The revolution strained bilateral ties further though Castro visited the United States in April 1959. During his stay, Castro met with then U.S. Vice President Richard Nixon.

On March 17, 1960, when the two governments still maintained diplomatic relations, the Eisenhower administration approved a covert action program against Cuba: Washington suspended the Caribbean country's petroleum quota. When Cuba bought oil from the former Soviet Union, U.S. refineries on the island refused to process it.

Washington sponsored an invasion by Cuban exiles, which took place on April 17. The attack aimed to establish a "provisional government" after the Bay of Pigs invasion, but the Cuban exiles were defeated in less than three days.

On Feb. 3, 1962, the White House imposed an economic, commercial and financial blockade intended to smother the incipient Cuban socialist government.

Washington continued to promote covert actions and managed to expel Cuba from the Organization of American States (OAS).

In October that year, the Cuban Missile Crisis happened after the former Soviet Union deployed ballistic missiles on the island. The 13-day confrontation between Moscow and Washington brought the world to the brink of a nuclear holocaust.

In 1966, Lyndon Johnson's administration passed the Cuban Adjustment Act, whereby Cubans who set foot on the U.S. territory could receive all kinds of support, such as work permits, financial aid and the right to apply for U.S. residency, benefits the United States did not give to people from any other countries.

After a year and a day on the U.S. territory, Cuban refugees can apply for residency which legalizes their immigration status.

With the disintegration of the former Soviet Union in 1991, the United States took advantage of the opportunity to destroy the Cuban Revolution and tightened the blockade by adopting the Torricelli Act in 1993 and the Helms-Burton Act three years later.

Obama's more progressive administration coincided with a more integrated and assertive Latin America that recognized Cuba as a role model.

This political reality made it much more difficult for the United States to continue to cast Cuba as a pariah state, and contributed to Obama's decision to radically alter U.S. strategy toward its socialist neighbor.

The historic December 2014 joint announcement by Obama and Castro was accompanied by a prisoner exchange, and was quickly followed by bilateral talks aimed at restoring diplomatic ties and gradually normalizing the relationship.

On July 20, 2015, diplomatic ties were officially restored and respective embassies were reopened. Shortly afterwards, on Aug. 14, U.S. Secretary of State John Kerry traveled to Cuba, and watched as U.S. marines hoisted the American flag at the embassy in Havana.

While only Congress can lift the U.S. embargo against Cuba, Obama has worked to peel away the layers of restrictions on trade and travel imposed over the past 50 years.

The latest package of measures was announced on March 15, and went into effect on the next day, allowing, among other things, U.S. banks to process dollar-denominated transactions "presented indirectly by Cuban financial institutions," according to Granma.

Direct postal service was suspended in 1968 after a bomb mailed from New York exploded at Cuba's Communication Ministry.

The resumption of mail service, via a flight from Miami, Florida, symbolized the larger bilateral effort to overcome ideological differences for the common good.