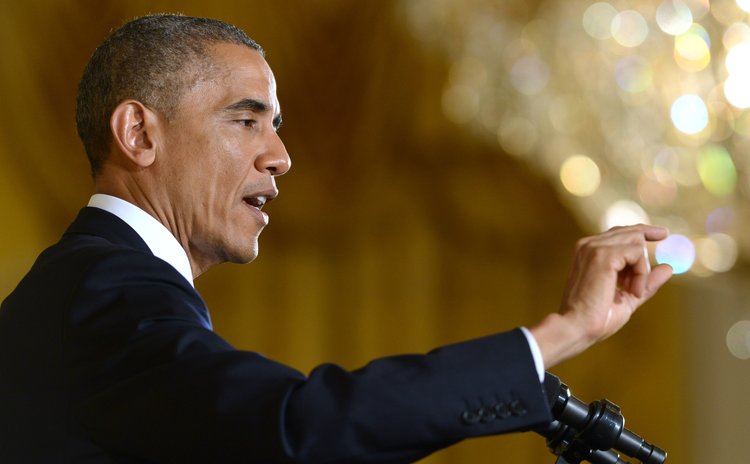 "Today, the United States, together with our allies and partners, has reached a historic understanding with Iran, which, if fully implemented, will prevent it from obtaining a nuclear weapons," the president said in a statement delivered in the White House Rose Garden.

Foreign ministers of the U.S. and other major powers -- Britain, France, Russia, China plus Germany -- agreed on Thursday on parameters to resolve major issues on Iran's nuclear program, following eight-day-long intense negotiations in the Swiss city of Lausanne, with a view to sealing a final comprehensive pact by the end of June.

Obama called the framework deal a "good" one that "meets our core objectives."

Under the parameters unveiled by the Obama administration, Iran agrees to reduce its installed centrifuges to 6,104 from some 19, 000, suspend the enrichment of uranium over 3.67 percent for at least 15 years and cut its stockpiled low-enriched uranium from about 10,000 kg to 300 kg for 15 years.

In addition, Iran allows regular access to all of its nuclear facilities for inspections by the International Atomic Energy Agency, and agrees to redesign and rebuild a heavy water research reactor in Arak that will not produce weapons-grade plutonium.

In return, the U.S. and the European Union will suspend sanctions on Tehran, with the lifting of all UN Security Council's past sanction resolutions.

The framework pact also sees Iran's breakout time, time taken to enrich enough weapons-grade uranium or plutonium for a nuclear weapon, being extended to at least one year from the estimated two to three months now for a duration of at least 10 years.

"This framework would cut off every pathway that Iran could take to develop a nuclear weapon," Obama declared, adding "With this deal, Iran will face more inspections than any other country in the world. So this will be a long-term deal that addresses each path to a potential Iranian nuclear bomb."

Mindful of skeptics at home and abroad, including Israeli Prime Minister Benjamin Netanyahu, Obama warned that only a negotiated deal can prevent Iran from building a nuclear bomb, with two other options -- bombing Tehran's nuclear facilities and walking away from the ongoing talks with the country -- leading only to another war and a nuclear arms race in the Middle East with the republic advancing its nuclear program all the while.

Some U.S. lawmakers have clamored for a deal that dismantles Tehran's nuclear program altogether, a goal the Obama administration has termed impossible.

"Iran is not going to simply dismantle its program because we demand it to do so," Obama said. "If in fact Prime Minister Netanyahu is looking for the most effective way to ensure Iran doesn't get a nuclear weapon, this is the best option."

He urged Congress, controlled by the opposition Republicans, to transcend politics in its dealing with the ongoing diplomacy over Iran.

"If Congress kills this deal not based on expert analysis, and without offering any reasonable alternative, then it's the United States that will be blamed for the failure of diplomacy," he warned. "International unity will collapse, and the path to conflict will widen."

U.S. Senate Foreign Relations Committee Chairman Bob Corker said he is moving forward with legislation that asks for a congressional review of any deal with Iran.

In his Rose Garden statement, Obama said he spoke to King Salman bin Abdulaziz Al-Saud of Saudi Arabia, Iran's key regional rival, to "reaffirm our commitment to the security of our partners in the Gulf."

The president invited leaders of Bahrain, Kuwait, Oman, Qatar, Saudi Arabia and the United Arab Emirates -- member states of the Gulf Cooperation Council -- for a meeting this spring at Camp David, a presidential retreat in the U.S. state of Maryland.

On Thursday, Obama also spoke to leaders of Britain, France and Germany respectively, in which they affirmed that the framework " represents significant progress" toward a "lasting" and " comprehensive" solution to the long-running disputes over Iran's nuclear program, the White House said.