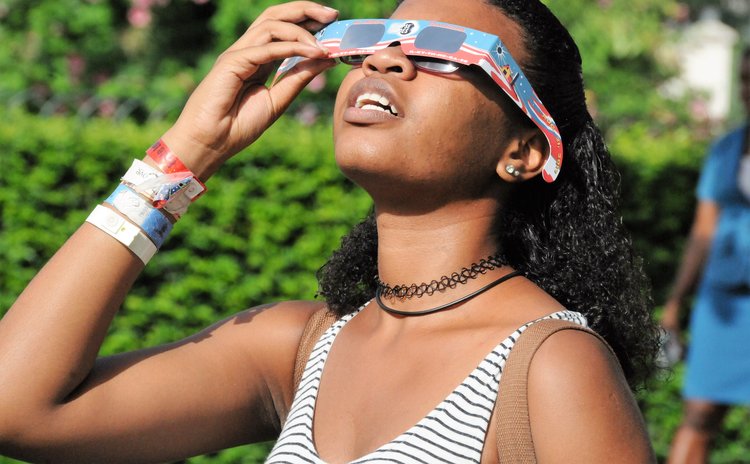 A large group, using special glasses provided by the Embassy of the United States, gathered to view the eclipse at the public library on Victoria Street, Roseau.

Dominicans, who live outside the path of totality, saw only a partial solar eclipse where the moon covered part of the sun's disk.

In the continental United States on Monday, the eclipse created a 70-mile-wide (112-kilometer-wide) path of totality stretching from Oregon in the Pacific Northwest to South Carolina on the East Coast.

The rare astronomical event, known as Great American Eclipse, arrived at about 1:16 p.m. EDT at Salem, Oregon, with the sun's disk being seen completely blocked by the moon darkening the sky for over two minutes.

The event marked a rare opportunity to study our sun, solar system, and Earth. It will also allow the lower parts of the sun's atmosphere, or corona, to be seen in a way that cannot completely be replicated by current human-made instruments. "As a source of light and heat for life on Earth, scientists want to understand how our sun works, why it changes, and how these changes influence life on Earth," NASA said.

"The sudden blocking of the sun during an eclipse reduces the light and changes the temperature on the ground, creating conditions that can affect local environmental conditions and animal behavior."

Astronauts aboard the International Space Station are expected to have a partial view of the solar eclipse three times.