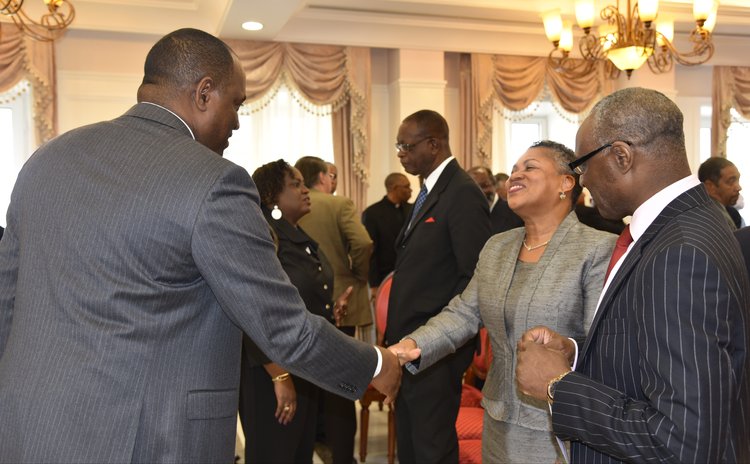 Pime Minister Skerrit meets the Chief Justice of the OECS

Chief Justice of the OECS Supreme Court Dame Janice Pereira called for equal justice in the rule of law when she addressed the OECS territories in the annual OECS Chief Justice address which marks the opening of the new law term beginning in September.

Speaking in her simulcast from St Lucia on Tuesday September 20, 2016 Dame Janice Pereira stated that if there was no access to justice, what was the point of the rule of law. Equal justice should mean equal access. Justice should not be the purview of the rich and powerful but should be about upholding the law. Access, she added, went beyond financial capability.

She also lamented the absence of any progress in the construction of Halls of Justice and upgraded facilities in regional courts to enhance the courtrooms.

Chief Justice Pereira did note that steps of achievements were made by the court in the last year with matters going through the court system at a much faster pace over the past two years.

Commenting on the different divisions of the court – civil, criminal and family divisions – the St Lucia jurisdiction with four judges had made some inroad into their backlog of criminal cases which numbered 1,500 criminal cases the highest in the region, 300 cases had been dealt with.

She recognised the passing of former Justice Frederick Bruce Lyle appointed a judge in 2000 and served in several jurisdictions in the OECS and passed in the year, as well as Raymond Okeefe who worked with the OECS Commission for more than a decade.

Justice Margaret Price-Findlay closed the session which was preceded with a church service at the Bethesda Methodist Church in Roseau where the Bishop of Roseau Gabriel Malzaire was the main speaker, and whose words provoked favourable reviews from his listeners during the court session.

Justice Price-Findlay's remarks were about her experience of the public who in the main were fearful of the courts and ignorant of how the justice system worked. The experience of most was that if their matter was civil they had to deal with lawyers and if criminal with the police.

So Justice Price Findlay told her legal colleagues that they should be fair with their clients by discussing the pros and cons of their matter, and should never give a false sense of security if the client had no case; tell them so and don't waste the court's time, she said.

She said she expected the day would come when the mediation process would be brought into all court matters. Mediation allows for parties to have a say in the resolution of their matter unlike the court which leaves one party satisfied and the other dissatisfied – one wins and one loses.

Justice Price Findlay, the sitting judge for the session noted that it was the duty of the judge to see that litigants without council got a fair trial, and that was when judges called on lawyers to do pro bono work, and it was then that she had seen lawyers make a beeline for the exit. She prevailed on her legal colleagues to look closely at themselves and to live up to the high standard set and expected of them.

"Uphold the integrity of this noble profession by our service to the public," she ended.