As talks continue between Guadeloupe, Martinique and the OECS for membership in the group, the road ahead is not easy. 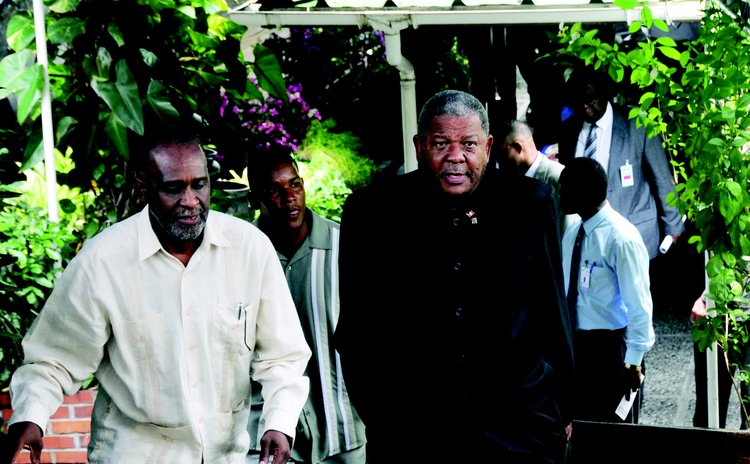 On the surface it would seem that there is more than just generosity of spirit, there is also expansive will.

"It will happen. Everyone wants it to happen," said the economist, McCarthy Marie.

But search beneath the surface, beyond the superficial, and you'll discover that the flesh is muddled.

"The problem is the bureaucrats at the secretariat are confused as to what it is they…want from us," he added.

On the outside, it would appear that there is more than just extravagant warmth, there is also a lavish sense of fraternal collectivism.

"We would like to strengthen our relationship," stated Baldwin Spencer, the Antigua & Barbuda prime minister, "we have agreed in principle to entertain the idea."

But work your way to the inside and you recognize that there's still a hard road to travel, still a very long way to go.

"The modalities will have to be worked out," the prime minister said.

It is the beginning of the journey towards membership in the sub-regional grouping, the Organization of Eastern Caribbean States (OECS), for our French neighbours, Guadeloupe and Martinique. Both departments have applied for membership and, according to Spencer, the issue will be discussed at the next OECS heads of government meeting in Antigua early next month.

The eastern Caribbean leaders see some value in a relationship with the French-speaking neighbours.

"Being part of Europe (they) could help open some doors to Europe (for us)," Spencer told The Sun.

But free movement of citizens – one of the key planks of the OECS integration movement – remains an uncertainty, unlikely, even.

France has a highly complicated system of governance made up of states, regional councils and departments, explains Marie, and the process can be stalled at any stage if the people who wield political power locally choose not to cooperate.

Marie, along with the former OECS director general, Swinburne Lestrade, conducted a study on the possibility of the French islands joining the OECS. In their report, they recommended that the governments pursue the relationship, Marie told The Sun. However, he is sure that freedom of movement as practiced by the sub-grouping -including the right to live and work - will not be part of the deal with the French-speaking neighbours.

"The question now is to determine what kind of associate membership they should have. They have to consider all current OECS members speak English (so) if you have to translate documents who will pay for it," he explained.

Marie is also convinced that, the absence of free movement notwithstanding, the relationship will benefit the sub-grouping.

"They will be able to take our concerns to France…it means if you are doing business with people in Martinique and Guadeloupe, through them you have access to businesses in France."

Gordon Henderson, the former Exile One leader, has vast experience in the French market. Henderson, who lives in France, sees benefits for Dominican musicians and artistes.

"It will speed up the work permit process (for Dominican entertainers performing in these territories)," he observed.

Citing the World Creole Music Festival as an example, where "it has been 17 years of constant employment for the best musicians from Martinique and Guadeloupe," Henderson says a relationship with the French territories will help even the field.

"Getting into the OECS you could put a fair exchange in place," he told The Sun from his home in Paris. "Right now it is one-sided."

Currently, citizens of some OECS states can visit either Martinique or Guadeloupe – or both – for up to three months without a visa. Henderson believes this can be extended to the rest of the grouping as part of the new relationship.

However, he suggests, there are bigger issues that generate enough righteous indignation among a feisty population that can persuade French leaders to think long and hard about freedom of movement.

"The problem is not necessarily freedom of movement," he said. "The problem is unemployed youth coming from St. Lucia and Dominica and involved in a level of crime which they will not be involved in in Dominica. And that is the major problem. It's not a question of overstaying, it is crime."

Still, the initiative has all the elements of the warmth of the real. The Antigua & Barbuda prime minister, who has been seeking bi-lateral relationships with the two French departments, has seemed to shut the door on Basseterre and Fort de France becoming full members, limiting their participation is some of the Charters.

"I don't think they can be full members of the Authority," Spencer told The Sun. However, he suggested that the talks will continue on free movement and other protocols.

"This is why it is important for negotiations and discussions (to continue) for us to discuss these," the Antiguan leader explained.

And while there is no set timetable for membership, Spencer said the process was ongoing.

No doubt, the spirit is willing.