Jump Ball No. 79. By Arlington James 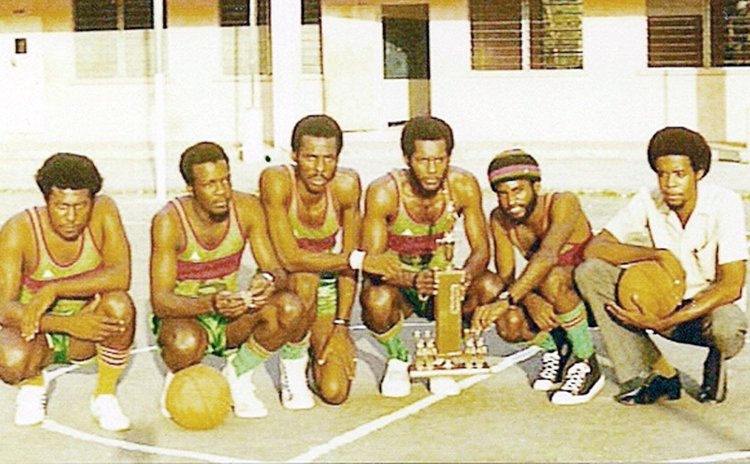 Part I of the article presented on Atoms (1967-1970), including members of that team who represented Dominica. The article concludes below.

Electrons (1973-1975): Three years after Atoms became a nonentity George Daniel, who had been a top player on Atoms teamed up with Errol Blackman, Bradley Hector, Cleveland Robinson, and others to form By-Trinee Electrons. They debuted in February 1973 and would quickly become one of the top teams in Division I. They were later joined by David Williams and others.

In their first year on the court Electrons performed creditably in the 2-round League, placing 3rd overall among the eight teams behind Cardinals (eventual League Champions) and Pros. According to Star Dominica of 20th July 1973, Electrons scored an aggregate of 620 Pts in their 13 league matches played and conceded 571.

According to available information, en route to taking that bronze position on the winner's podium Electrons enjoyed victories over Roseau Concords (59-50), Dominica Grammar School (43-28), St. Mary's Academy Gales (55-32), and SMA Sharks 52-47) among several other victories. However, two of the defeats that they suffered were against Pros (33-42) and Roseau-based Raiders (41-47). They would also have lost twice to Cardinals.

George Daniel was one of the five top aggregate scorers in the 1973 League, having amassed 216 points in his 13 matches at a rate of 16.6 Pts per game.

That year silverware jingled as Electrons, who had included Al Monelle and Hubert Charles in their lineup then, were crowned 1974 Knockout champions, after a match which saw them defeating Cardinals 49-33; that finals was described in The Star of 7th June 1974 as "almost a one-sided affair." Two of Cardinals' key players were absent for that encounter. But… There is no REMARKS column in the score book!

In reaching the Finals Electrons had knocked 1974 League Champions, Pros, out from the competition.

The published information on Electrons for 1975 is extremely sparse. However, from what is available we see them competing against at least Cardinals, Flames, Pros, Raiders, and Zodiacs who they narrowly defeated 43-39 with George Daniel and Al Monelle sinking 19 and 12 Points respectively.

Soon thereafter, Electrons fell to Flames by a score of 36-52, with G. Robinson getting 15 Pts and Cleveland Robinson 13.

Coach Daniel: In 1975 George Daniel was appointed Coach of Dominica's National Team for the first Windward Islands Basketball Tournament which was staged in St. Lucia. Dominica emerged 2nd among the four teams.

Win 1... Lose 1… In 'Gwada': In Electrons' first year on the basketball scene (1973) they undertook a weekend two-match tour of Guadeloupe in April, and returned home with mixed results. In their first encounter they enjoyed victory against Racing Club of Guadeloupe 54-42 in a match played at the Racing Club Stadium. The following evening, they were "swamped" by Banelot, Guadeloupe's basketball league champions then, being blown-out 62-27; that match was played at Halle des Sports, Basseterre. George Daniel top-scored for Electrons in both encounters with 19 and 12 points respectively.

Aborted Efforts to Host Tournament: Electrons, in 1973, had organized what would have been Dominica's first major basketball tournament - a West Indies Basketball competition, with 5 teams expected from overseas: a Venezuelan College team; Banelot Men's and Women's teams from Guadeloupe; and Gold Stars Men's and Women's teams from Martinique. The tournament roster would have been completed with Dominica's then defending league champs Cardinals, a Dominica Representative Women's Team and hosts, Electrons.

However, on account of the political climate existing in Dominica in mid-1973, The Star of 27th July 1973 reported, "By-Trinee Electrons Basketball team had to call off their own organized first West Indies competition after receiving phone calls from overseas teams that they could not participate because of the present state of affairs... The tournament was previously postponed from 25th June to 24th July because of the existing State of Emergency. The second postponement is of an indefinite time." And so, that tournament never materialized.

In an effort to raise funds to defray anticipated tournament expenses Electrons had organised a raffle, with the first prize being an all-expenses-paid trip for two to Guadeloupe, or $250 cash.

Remarks: And so, these two short-lived teams, both of whom captured championships, made their contributions to the development of Dominica's basketball. Jump Ball wishes all those players from the 1960s and 1970s all the best in their current endeavors.