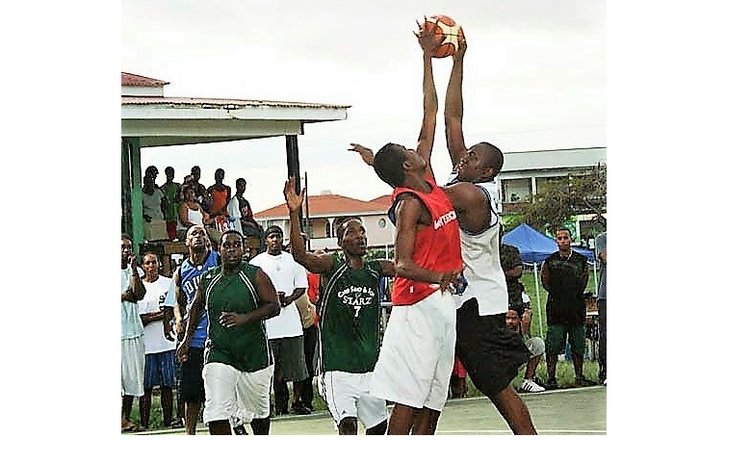 Part I of "Off-Season Basketball Leagues" which was published in the previous edition of Jump Ball presented an peek into the entry of the first two 'out-of-town' teams into the national basketball league and where, in the early 1970s, teams from Roseau sometimes travelled up to Grand Bay on a Sunday afternoon to take on that community's basketball team in friendlies. At the time the Sout' City team, viz. Pros, was gearing up to "go down to Roseau" to make their debut and play in the national league.

More importantly, however, the first part of the article also touched on Dominica's very first Off-Season League, which was run half a century ago this November and played on the St. Mary's Academy basketball court. Additionally, the section listed the various communities around the country that have so far organised their own "Off-Seasons" over the past five decades.

It is interesting to note that in the "good old days" the body responsible for organising basketball at the national was the one who ran the very first Off-Season League.

The article continues and concludes below.

"Off-Seasons'" all have their individual unique flavour and character. Some are sponsored by private sector entities, others by Parliamentary Representatives or other politicians. Some – like the RIC League when it was run - provide uniforms for all participating teams. Other Off-Seasons cater for teams specifically from the particular community, while still others seem to have a "Just put on your boots and come" open-participation policy.

For example, in the early editions of Trafalgar's Basketball League, participating teams featured only from Trafalgar and environs, viz. Road Stars, Lily Valley, Upper Village and Sharks from Trafalgar, and Fond Canie Rebels from their sister community. A few years later participation was expanded to include Morne Prosper, and Wolverines from Bath Estate – both from the Roseau Valley by extension. The 2014/15 edition of that League included teams from as far as Pichelin and Grand Bay.

At the other basket, the 2016 Portsmouth Basketball League was run like a mini-National League, with 18 teams in two Divisions, (11 in I, 7 in II) coupled with zoning of teams in the senior Division. Four school teams (PSS [Sr.], PSS I, PSS II, PSS Girls) were among the 18, which included a second women's team (Bense Girls).

Off-Seasons are usually of fairly high standard, attracting national players and other senior players from the national league, and offering fairly high quality entertainment to patrons. Players on those teams sometimes use these competitions to maintain their fitness, or to prepare for the upcoming National League.

Some players even hit their highest player-scores in Off-Season leagues, and the records will show that a few players who made their basketball debut in an Off-Season, went on to become star players in their own rights, and even represented Dominica on the senior national team. That was the case with one of the players who debuted in the inaugural Pottersville basketball League in 1987.

It must be noted that one player, who sometimes "dreams about basketball", has so far participated in as many as 14 Off-Season Leagues, in communities distributed in the Northern, Southern, Western, South-Eastern and South-Western districts, as well as in Roseau and the Roseau Valley.

Sadly though, over the years for various reasons many Off-Season Leagues have fallen "off the edge of the court". However, Jump Ball wishes to commend all the various organising committees who continue to provide such a valuable service to the basketball fraternity and to keep basketball alive, or who in the past organised such exciting leagues for players, their communities and for Dominica's basketball. Jump Ball also salutes the many individuals who were pioneers of the game in their particular communities.

OK guys. The Referee has stepped into the centre circle. It's Jump Ball time!