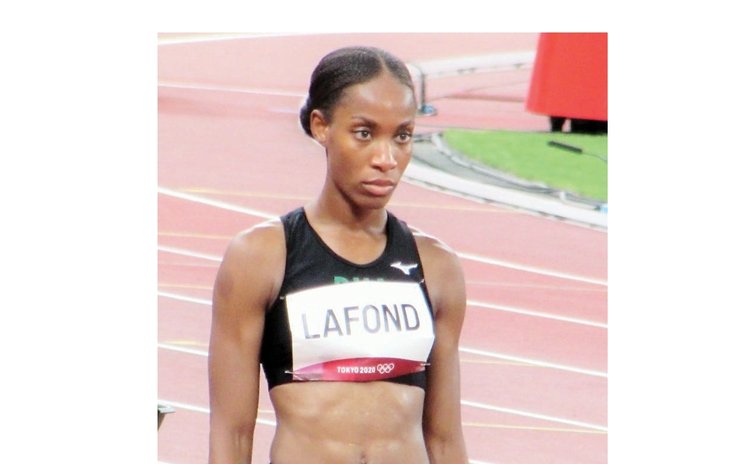 A pensive LaFond after the last attempt

Thea LaFond waited five years for an opportunity to return to the Olympics and find redemption on track and field's biggest stage.

On her first day out there on July 30, Lafond set a new national best of 14.60 which qualified her for the finals of the women's triple jump at the Tokyo 2020 Olympic games.

She breezed into the finals needing just one of her three allotted jumps to meet the qualification mark.

On the day of the finals on August 1, in the best shape of her life, LaFond entered, hoping for a happy ending.

Having fouled on her first attempt, she pulled up on the second resulting in a jump of 12.57 meters. The pressure was mounting. Only the top eight of 12 competitors advanced to the final three rounds and she needed a strong jump to move into the top eight.

The olympian powerfully raced down the runway and when she landed in the sand from her jump, she had easily cleared 15 meters – a result that would have put her in second place and given her three more attempts. But it was not to be. LaFond's left foot had crossed the foul line. A referee raised a red flag, signaling a fouled jump. LaFond could only grimace. Her Olympics were over.

"It hurts to have a medal-hitting jump that is a foul, but I was moving faster than I've ever moved in my life, and making those adjustments are really difficult when you've never seen your body produce something like this before," LaFond said. "Thank you for the support. Thank you for the messages".

It was a disappointing result for the Mahaut native who in 218 became the first Commonwealth Games bronze medalist and in 2019, set the Organization of the Eastern Caribbean States (OECS) outdoor record of 14.38m, before sustaining a season-ending injury. Getting back to the track, in February of 2020, she surpassed the Olympic standard by a centimetre and became the first woman from the OECS to make the Tokyo 2020 standard.

Meanwhile, on July 31, national athlete Dennick Luke's dreams of qualifying for the next round of the men's 800-meter event at the Tokyo 2020 Olympics also ended on a sad note.

Luke, who was running in lane 8 in heat number 5, when it appeared he was clipped from behind by another runner in the pack and tumbled on the track.

The athlete was looking very solid in the race up until his unfortunate incident. He was in 3rd place at the 400-meter mark at the time of the fall.

Despite falling, Luke who became Dominica's first 800m runner competing at the Olympic Games since 1996, got back on his feet to continue the race and recovered strongly but in the end, it was too much to overcome, and he finished in 8th place in a time of 1 minute, 54.30 seconds.

Apologizing to any of his supporters back home who he may have disappointed, the Portsmouth native vowed that he will be back at the next Olympics, but this time, "bigger and better."

The Olympic Games began with an opening ceremony on July 23 and will officially end on August 8th, 2021.