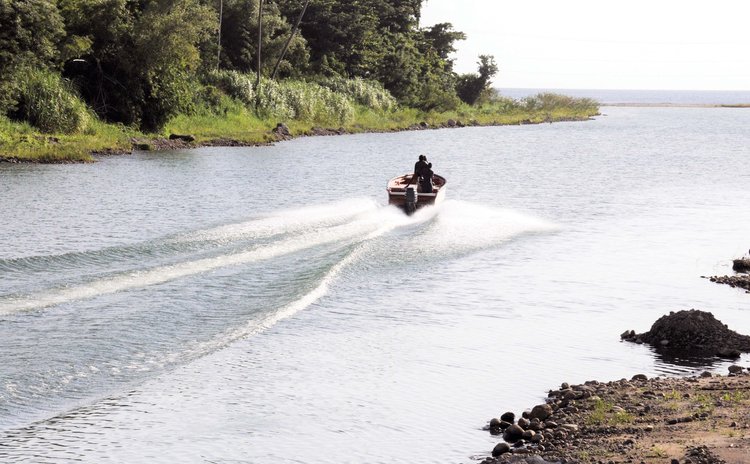 A boat ride on the Layou River

A month after black oil appeared in the slow-moving water of the Layou River, questions remain about the source of the oil, how poisonous it may be to fish and humans, who is responsible for the spill and is there more oil to come down stream from the source. No one has answers, yet.

Last week villagers of Layou demonstrated near the mouth of the river seeking the attention of government officials.

Well known for its titiwi- a translucent, tiny, guppy-sized fish that appear by the multiple hundreds of millions, at the mouths of the island's fresh water rivers- Layou has reason to fear the loss of its natural treasure. There are other losses as well.

For instance, residents, like Tyrone "Blessings" Anthony, is concerned about losing the quality of his bath. "It is always oily so I can no longer take a bath in the river as I used to because of the colas. We also have the issue with the smoke and the particulars emanating from it. The fishermen are suffering and cannot meet their livelihood at present. It's an environmental, health and financial factor at the moment," he said.

"I have met with members of the community and the situation is one of serious concern, the dredging which will affect the river and the titiwi, we have seen them already being affected," Fr. Cuffy said.

Earlier, Dr. Genora Joseph, the Chief Physical Planner at the Physical Planning Division, said in a statement, that On Thursday 23rd, July, she received a report from villagers of Layou that there had been contamination of the Layou River. She said there were also allegations that the contamination originated from the asphalt plant situated in Layou.

Dr. Joseph said a visit to the Layou River revealed that there was a dark, oily liquid floating on the vegetative area of the river close to the river mouth and some deposits of oil on the river banks.

"Our inquiries on this matter are very much ongoing; they are very much in the early stages. We are looking to ascertain what is the material that was in the river, the type of oil that was in the river with a great level certainty so that we can identify where it originated and how it came to be in the river," she said. "We are also considering the possibility that the leak could have originated from heavy equipment operating in the area," she said.