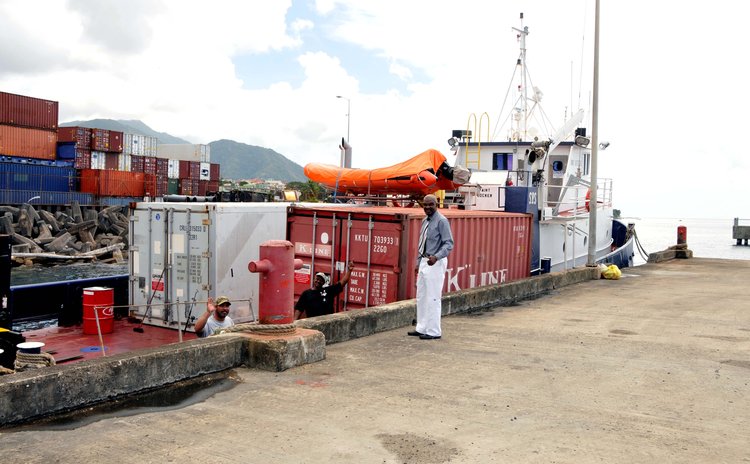 Oliver "OJ" Seraphin, a former Prime Minister of Dominica, has partnered with the Roosevelt Skerrit administration to transport agricultural produce to other Caribbean islands.

Through his business Global Shipping, Seraphin has purchased a boat which will be used primarily to transport agricultural produce.

The boat named "American Liberty" is 104ft long and was purchased in a Louisiana ship yard at a cost of US $1.4 million.

In an interview Seraphin told the Sun that in 2014 he held meetings with the Government Dominica, specifically Dr John Collin McIntyre, the Cabinet Secretary and Government's Advisor Edward Lambert.

"Later on I held discussions with the Minister of Trade throughout the course of last year looking at possible arrangements by the way of joint cooperation by the way of private sector and public sector partnership," Seraphin said.

He noted that he was aware that two years ago the government made $6 million available in the budget for the purchase of a boat that would offer export services to farmers, private sector entities and those in the manufacturing sector.

He said the weakness of trade and commerce in the Caribbean is the lack of shipping so he was persuaded by the government to proceed with this venture.
"There is some problem especially in refrigerated container shipping because Tropical Shipping is the only one offering that service and the schedule that they have do not fit in into the pattern of trade of agriculture produce from here to the islands," he said.

Seraphin said the "American Liberty" is capable of carrying 20ft and 40ft containers.

Seraphin told the Sun that the owner of the shipyard is a joint venture partner.

"If and when the demand for more space is required our partner will be prepared to associate with us to bring in a larger boat if necessary," he said.

Seraphin stated that letters of intent were written to DEXIA, DAPEX and FAIRTRADE.

"Dominica is our base of operations; we intend to do a two- week programme from here then to respective ports every other week," Seraphin said.

Discussions are ongoing with the Government towards a mutually satisfactory arrangement.