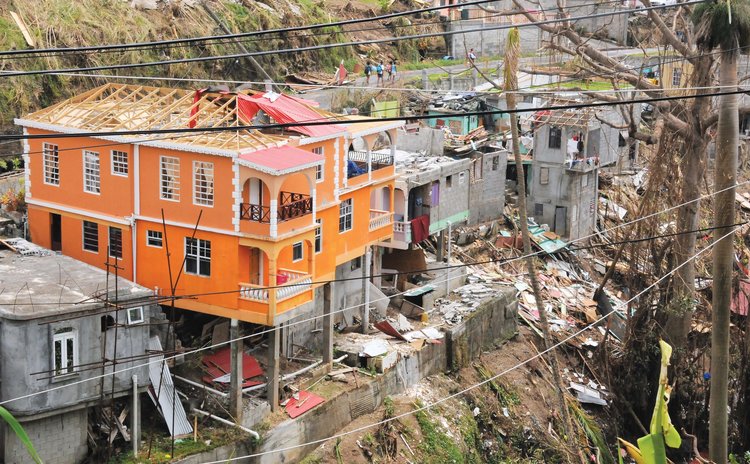 Roof of house at Kings Hill damaged by Hurricane Maria

Elsa, the first hurricane of the 2021 season and the fifth storm of the year, gave Dominicans a taste, a reminder, of the fury of nature that we expect to come as the hurricane season unfolds.

And Elsa also reminded us of an uncomfortable fact: We are light years away from being resilient to natural disasters.

But few Dominicans need a reminder; not many will easily forget the monster Hurricane Maria that made landfall on 18 September 2017 and transformed our lives forever.

On Friday, 2nd July at about 9 am, Elsa forced Prime Minister Roosevelt Skerrit to shut down the country, with immediate effect catching most Dominican unprepared, as Dominica was placed on Tropical Storm Watch.

Luckily not much happened.

But this is not the end of the fear, of the game of trying to predict the near-unpredictable, of the praying to Papa God to spare us all, of the sighs of relief as another storm passes from the Atlantic Ocean to the Caribbean Sea.

According to the weather experts at Colorado State University (CSU) the 2021 season will be above-average. In its April 2021 forecast, the CSU said that factors related to El Nino and La Nina in the Pacific and warmer than normal subtropical Atlantic waters would drive another above-average hurricane season. These factors persist.

In its June update, the CSU team said there would be 18 named storms, 8 hurricanes, and 4 major hurricanes for 2021, so still an above-average season, including sub-tropical storm Ana which formed in the Atlantic in May.

So the rhymes that we learned about hurricanes in primary school- "June too soon… September all over"- no longer make sense.

As we stated last year, when it comes to the annual hurricane season, Dominica and the rest of the Caribbean are like prisoners on death row. We sit in our cells, waiting, hoping, praying: but eventually, our date with the hangman comes, and unless there is a miracle, the nooses around our necks tighten, our bodies stiffen as life itself is taken away.

That's life in Dominica, the land of storms and hurricanes.

Since the beginning of time, there has been the threat of hurricanes and storms like clockwork every year, but lately, these storms have become angry raging bulls. And deadlier.

The forward speeds of hurricanes have also become slower as they tend to sit on an island gathering force and then unleashing their fury. The speed at which they now gather strength has been alarming.

Michael Le Page in an article in the New Scientist, published in April 2020, states that slower-moving hurricanes will cause more devastation as the world warms.

For example, LePage said, Hurricane Harvey caused catastrophic flooding in 2017, killing 68 people and costing $125 billion in damages. One reason it was so destructive is that it moved unusually slowly and remained over the same area for days – and as the world warms, there are going to be a lot more slow-moving tropical cyclones like Harvey.

But what can we do about it?

Unfortunately, however, the consensus among environmentalists and disaster risk management experts is that Dominica is even more vulnerable to hurricanes and tropical storms than it was in August 2015 when Tropical Storm Erika caused more than a billion dollars in damage, killed dozens, and wiped out the village of Petite Savanne forever. Or Maria on September 18, 2017, that killed 31 people and caused more than US$930 million in damaged homes, bridges, and other infrastructure.

As the Sun stated in an earlier editorial, Dominicans seem to have adopted a laissez-faire attitude to preparation for hurricanes. Almost everyone, it seems, waits until the forecasters predict a direct hit on Dominica and then they rush to the supermarkets and gas stations. That, of course, is not good enough.

Given our experiences over the years, the most traumatic being Hurricane David in 1979, tropical storm Erika in 2015 and Maria in 2017, one would expect Dominica to be much better prepared for the impact of hurricanes and other natural disasters. But most islands of the Caribbean, including Dominica, seem to have adopted a fatalistic attitude towards hurricanes. They blow our way every year anyway so there is not much, we seem to have concluded, that we can do about them.

Based on our record of poor management of hazards, Dominica may be in for a rude awakening in 2021.

The point we wish to make is that our laissez-faire attitude to disaster management is not due to a lack of knowledge and experience. We seem to be devoid of the political will to take the necessary action to be better prepared for the impact of natural disasters caused by hurricanes, earthquakes, and volcanoes. It would appear that we give serious thought to natural disasters only at the point when disasters are about to strike but during the rest of the year we ignore essential institutions such as the Office of Disaster Preparedness.

A few years ago the disaster management office was stripped of its experienced technical staff and about a year ago we heard of the resignation of two of the top executives of CREAD, the agency that the Government created specifically to make Dominica the world's first climate-resilient country if ever that was possible. Their departure has not been adequately explained.

In spite of the fact that hurricanes have become statistical certainties in the region, our governments have not prepared as adequately as one would expect. For instance, adequate insurance coverage for the tourism sector, or for any sector for that matter, is still a major concern. Additionally, for decades agricultural economists have suggested various insurance schemes for agriculture, the lifeblood of our economies, but our efforts to implement them have been sporadic and inadequate. WINCROP, the old Windward Islands banana insurance scheme, has died along with the banana industry and few people are talking about that insurance scheme these days as if the banana industry was the only sector of agriculture that needed insurance protection.