Only one version, please! 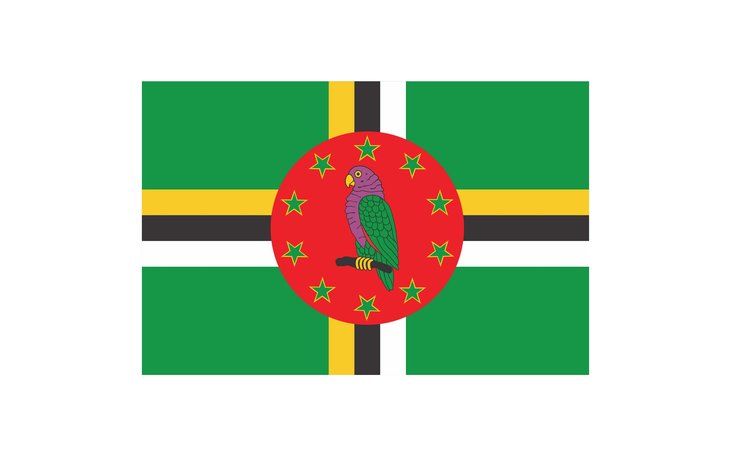 Official flag of the Commonwealth of Dominica

The year was 1978 and Dominica was abuzz with talk of independence from Britain.

It was clear that independent Dominica would require a national flag; and not just any coloured piece of cloth a distinctive flag symbolizing unity, justice and freedom!

The government decided to hold a flag design competition; the winning entry would be Dominica's first national flag to be raised to the heavens as the formal declaration of independence.

After careful thought, he chose a combination of colours and elements for a flag that he felt would surely promote a powerful international presence and capture the essence of Dominica.

The design struck the right chord in the judges' minds and Bully's entry won. To him, designing the National Flag design was a great honour and a source of heartfelt patriotic pride.

"We grew up in my household with a fierce pride in Dominica…" Bully said. Therefore, when his design won it was more than a source of personal pride; it was a family honour.

There were a few changes to Bully's original flag design. The Government of the day asked for vertical lines to be added to the horizontal lines.

And there were changes based on the protocols of the College of Arms in Britain. Later, it was directed that the central icon the Sisserou Parrot must always face the flagpole.

But the changes to Dominica's flag did not stop there. Over the years, several unauthorized deviations from the established design have appeared.

According to Lawrence, this has prompted the Committee to declare "enough is enough" and move to standardize the National Flag and weed out inaccurate, unofficial versions.

Based on the committee's intervention, Cabinet recently approved the standardized version, which Lawrence described as essentially the same as the one approved for the inaugural Independence.

However, he noted two exceptions in the standardized version. The Sisserou Parrot has a yellow beak and purple breast, and the green stars are outlined in yellow.

"So when I say "standardized" it means we want everybody to be aware, to accept, to use one version of the flag. . . It is the same flag; not a new one," he said.

"During the time since we have been independent, there have been tweaks to the flag…you don't know who did it, we are not sure how it happened…as a nation we cannot allow that to continue."

Lawrence noted that Bully, the designer of the original flag, was consulted on the standardization of the flag .

Now, the Emblems Committee is working on a public awareness campaign to ensure that everyone knows the correct flag design and how to display it properly.

The committee is also examining the existing protocol for the use of the flag in the hope that actual laws can be enacted to govern the use.

"The committee is proposing allowing more flexibility with regard to the protocol and the use of the flag. However, we felt there should also be limitations…

Noting that the current protocol prohibits the use of the flag onstage, Lawrence said, "We are suggesting that as long as the onstage performance allows the flag to be used in a decent respectful manner, then the person would be able to use it."

Bully agreed that regulations must be in place to ensure respect for the flag. "It's a national symbol and it should be respected… the question is whether it is being used as an item of pride or as a rag," he commented.

According to a description provided by Lawrence, the standardized flag of Dominica bears a circular emblem of red with a purple-chested Sisserou Parrot on a twig encircled by 10 green stars.

This is superimposed on three vertical and three horizontal stripes of yellow, black and white, forming a triple-coloured cross against a background of forest green, the document said.