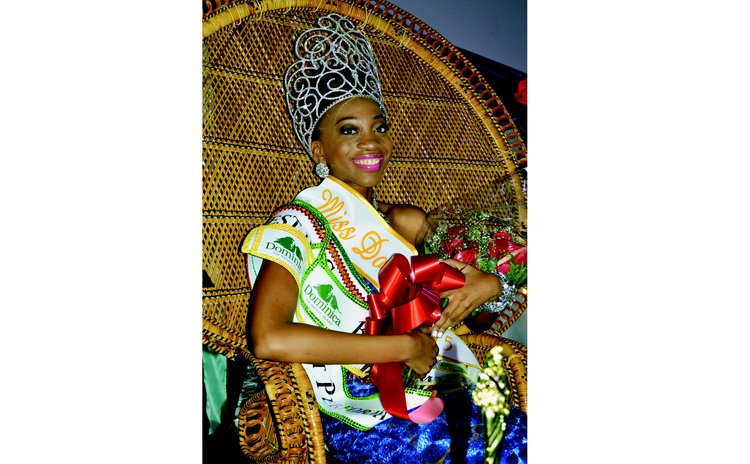 Winning six of nine awards at the National Queen Show Pageant on Friday, February 6, 2015 at the Windsor Park Sports Stadium, Odessa's star power dazzled the judges and the crowd and the other six contestants in this annual pre-carnival beauty and brains and talent extravaganza.

"I am extremely elated," she said after her glittery introduction to Queen-Dom. "I just want to say thank you, to the Almighty Father and everybody who supported me especially my sponsors".

"The hard work paid off," she said. And she is already advising the princesses how to become queens.

"They should have extreme confidence in themselves, with confidence they can be optimistic, they can achieve anything that they want to achieve," she said.

During her reign as Miss Dominica, Odessa says she intends to push her platform throughout the island, starting with her class at the Convent High School.

"I intend to push my platform forward- "The Power of Perception"-and try to instil positive thinking all around Dominica. I am a homeroom teacher so I am going to start with my own class and we are going to spread that positivity throughout Dominica", she stated.

Elie captured the awards for Best Costume, a fire dragon which glowed in the dark; Best Performing Talent where she hung from the ceiling performing acrobatic stunts then dramatically fell to the floor where she performed a creative dance; Best Swim Wear and Best in Swim Wear where she wore an intricately designed two-piece bathing suit that she designed herself; Best Response to Questions and Miss Photogenic.

Odessa was sponsored by Big Edge Financial Express and Miniya's 7-11.

Trailing closely behind was Kelcia Righton, 21, of Kingshill, the First Runner Up; she was sponsored by her employer, Fort Young Hotel.

Righton captured three awards: Best in Costume, in which she moved effortlessly in a gigantic pineapple; the fruit is known as the symbol for customer service making it highly appropriate for Righton's "Customer Service as a Lifestyle" platform.
She won awards for Best Evening Wear and Best in Evening Wear; the gown was a champagne inspired theme gown designed by a well-known Antiguan designer.

Second Runner Up was Marigot's Patrice Dorsette who was sponsored by First Domestic Insurance Limited. Although she did not capture any award, Dorsette was clearly one of the crowd's favourites because of the humour that she presented in her creative talent and her costume which showed cut-outs of Prime Minister Roosevelt Skerrit and Opposition Leader Lennox Linton holding a cut-out image of Dominica.

Keianna John on Salisbury captured the award for Miss Amity.