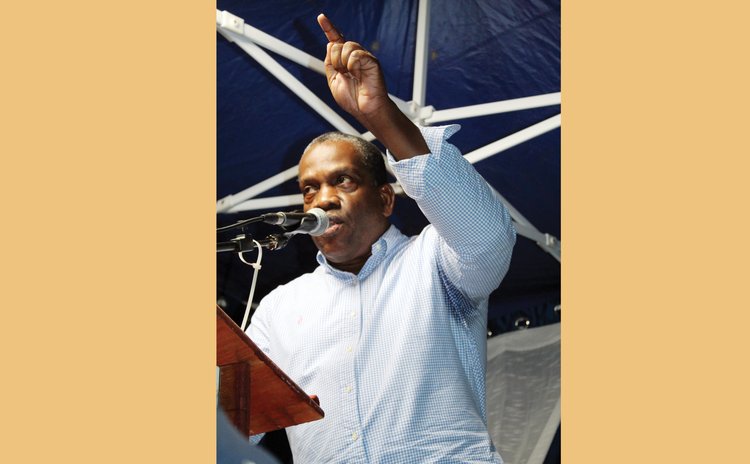 UWP leader Linton makes a point at the Lagoon meeting

One after the other last Friday, politicians of the opposition United Workers Party (UWP) and the Dominica Freedom Party (DFP) came to the platform at Lagoon in Roseau with one message: Where is the money? Here are some snippets of what they said:

Johnson Boston, DFP. "More they spin, more they put themselves in trouble."

Francisca Joseph, Laplaine: "We want to know where all the money gone. Ladies and gentlemen, if it quacks like a duck and it walks like a duck, what is it? Now is the time for you to act. You, the people, must protest and the largest protest is when they call the election. Vote them out!"

Ezekiel Bazil, Wesley: "Every single independent body in Dominica is compromised. We must stand up for democracy before it is too late."

Jefferson James, Portsmouth: "We have foreigners taking foreigners to court for the resources of the State."

Rosanna Emanuel, Petite Savanne: "How can we have foreigners fighting for our money? Come on people! You should be outraged!"

Kent Vital, DFP: "The selling of passports to criminals that is what is going to kill the CBI."

Joshua Francis, Roseau Valley: "We are going to cut that grass very low and all the snakes shall be exposed."

According to the UWP, the purpose of the Lagoon meeting was to intensify the opposition's contention that Prime Minister and Minister of Finance Roosevelt Skerrit has been mismanaging funds from the sale of Dominican passports under the Citizenship by Investment (CBI) Programme.

Earlier last month, in his response to the 2019-2020 national budget presentation of the Prime Minister Skerrit, leader of the opposition Lennox Linton said the amount of CBI revenue that was reported for the financial year 2018-2019 was short by a billion dollars which, he argued, should have been accounted for.

But Prime Minister Skerrit has stated that Linton's claim reflects his inability to understand the budget process.

Over the past weeks the opposition has held a number of small protests in towns and villages in Dominica asking "where is the money".

At the Lagoon meeting Linton said he was giving Prime Minister Skerrit and ultimatum.

Linton also questioned Government's granting of a contract to build the Marigot Hospital, with CBI funds, without a bidding process, to Montreal Management Company (MMC); that company has been receiving many multi-million dollar infrastructure works and housing contracts in Dominica.

Linton contends that there are qualified builders and contractors in Dominica and in Marigot who should have been contracted to build the hospital.

"Marigot is sending a message tonight," Linton said. "We are warning Government that this provocation will not stand. We will not stand for it."