Opposition MP Danny Lugay gets his salary after four months: "It was the best four months of my life" 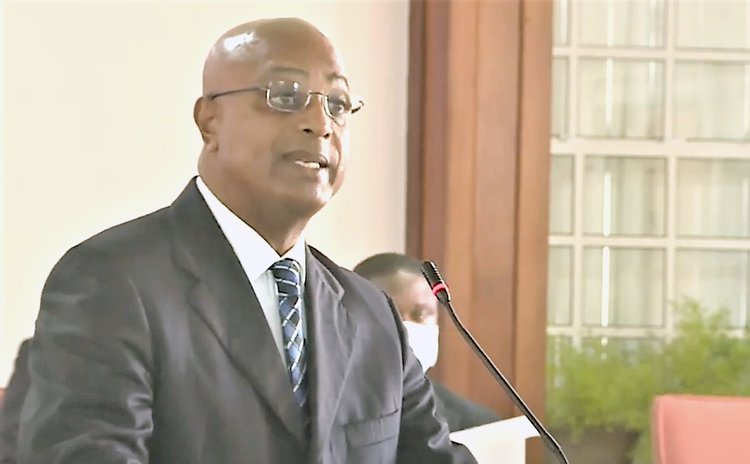 Parliamentary Representative for the Roseau North constituency, Danny Lugay who spent the last four months without a parliamentary salary says what was meant for his destruction served in his favour.

This comes as Lugay's monthly earning was reinstated, four months after parliament decided to withhold his salary.

The matter dates back to July 29, 2021, when the MP was forcibly removed from the First Meeting of the Second Session of the Tenth Parliament sitting and banned from the session.

On the day in question, the opposition members strongly protested a vote supported by the government side in the House to limit the Opposition Leader's response to the Prime Minister's budget to only 30 minutes.

The government members and the Speaker of the House argued that since Linton was not present for the Prime Minister's budget presentation, the two hours previously allocated to him had to be withdrawn.

However, opposition MPs insisted that Linton should not be punished for taking the same action as the Prime Minister who has never been present during Linton's budget response.

The matter was brought to a vote and the majority ruled, following which Lugay rose and declared that the House would not continue its debate after committing such "a grave injustice to the process of our democratic system."

He was then joined by members of his party who, despite several requests by the Speaker to take their seats, refused to do so.

The Speaker then ordered the Sergeant of Arms to remove the opposition members and though all were thrown out on that day, Lugay was banned from the session as he had to be physically removed from the House.

Lugay was subsequently written to on August 10, 2021, by the Clerk of the House, Daniel James, who informed him of the suspension of his wages in accordance with Standing Order 50:(3) (C).

The Roseau North MP who earlier spoke to The Sun informed us that he would consult his attorney for advice on the way forward as according to him, the Standing Order cited is unconstitutional and of no effect as the constitution makes protection for a parliamentarian's salary.

While it appears that no legal action was pursued, at a recent protest in Roseau, over the candidacy to Dr. Henderson, Lugay said "for four months they took my salary away hoping to crush my spirit but here I am. It was the best four months of my life."

In announcing the reinstatement of Lugay's salary, Speaker of the House Joseph Isaac informed parliament at the recent sitting of the Second Meeting of the Second Session of the Tenth Parliament, that the MP's wage will be retrospectively valid from the start of November 2021.

The monthly salary and allowances of a parliamentarian is about EC$2,700.

The Speaker further stated that although each side has a right to strategize, they must do so within the ambit of the rules of the House.

"Your strategy cannot be a punishment to yourself and then after your strategy fails or action has to be taken based on the rules members go on the radio station in a big discussion and debate not referring to the rules but condemning decisions and putting members of this Honorable House in disgrace in the eyes of the public," Isaac said.

The Speaker stated while it is a democratic right of parliamentarians to speak on any platform of his choice, consideration must be taken for those who bring matters of the House which are being debated on the radio, "calling Members of the Honourable House corrupt and all bad names, we need to determine this should be."

He said at the next meeting of the privileges committee, new disciplinary measures will be discussed for parliamentarians who bring the House into a state of disrepute not only at a sitting but in the public domain.