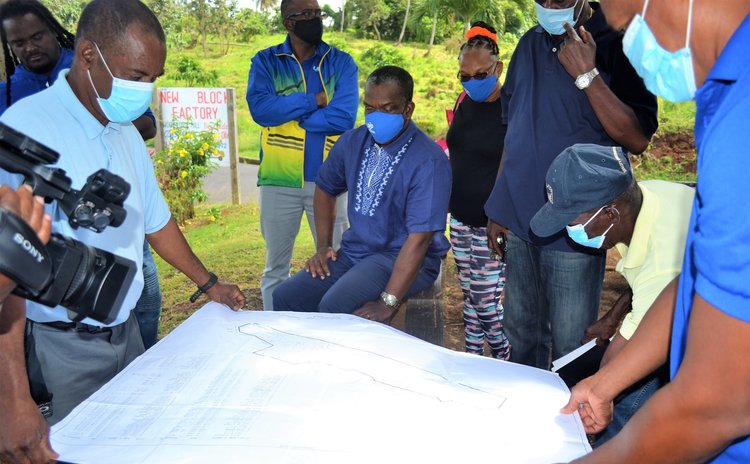 Officials of UWP examine a map of the Wesley area

Following several decades of promises of an International Airport here in Dominica, if the pronouncement from the Roosevelt Skerrit administration is correct, then by the end of March 2021, work is expected to begin in Wesley, for this long-awaited airport.

But as we move closer to the end of the first quarter of 2021 which the Prime Minister concretely gave as the date for commencement of this airport, disagreement continues to fester mainly from the residents in the Wesley and Woodford area, over land acquisition, lack of transparency and the absence of development plans for the building of Dominica's first international airport.

At an opposition United Workers Party (UWP) site visit of the 411 acres of land acquired by the Government, held on February 28, 2021, several landowners stepped forward and expressed their gripe, for unwillingly having to surrender their properties.

One, in particular, was Jenner David who just two years ago built his dream, where he planned on spending his retirement. That dream can no longer become reality.

"It is not something that is easy to digest because I just built my home. I haven't even enjoyed it yet. My kids haven't enjoyed it yet. I reside in New Jersey so you can understand how difficult it can be. We were told that the airport is going to be in this area. My house is going to be one of those homes they're gonna have to acquire so we don't have a choice. I would prefer not to have to give up my home because, like I said, I chose this area 15 years ago because that's where I wanted to retire, but they said it's going to be acquired for an airport, so we don't have a choice," he lamented.

David who resides in New Jersey said that he rushed back to Dominica three months back following news that the land was going to be handed over to the developer. Since then it's been a back and forth ordeal.

"I have been in negotiations with the government at least three times and we have arrived at a figure I am comfortable with...I was hoping that by now I would have known exactly what is going on. Not a lot of information is coming from the government. We're hearing that some people got paid, but I and many others haven't gotten paid."

Speaking during a press briefing following the site visit, the leader of the opposition, Lennox Linton raised several questions and demanded that the government present several studies including: feasibility; geotechnical; environmental impact assessment; environmental impact analysis; all of the market surveys which were done; master plan and site development plan which indicated that the site is more suitable than the 1000 acres of land purchased by the UWP.