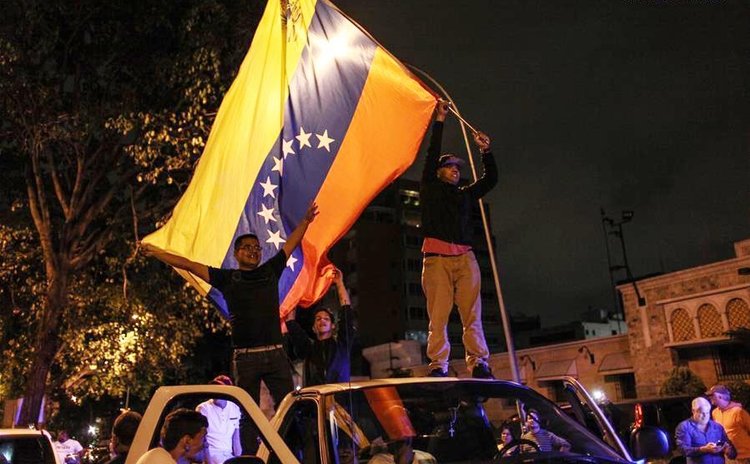 Members of the opposition celebrate victory at parliamentary polls

CNE President Tibisay Lucena said the Democratic Unity Roundtable (MUD) has won 99 seats out of 167 in the National Assembly, while the pro-presidential United Socialists Party of Venezuela has taken 46.

Lucena said the results for 22 other seats had not yet been confirmed.

The result strengthened the opposition's hand against President Nicolas Maduro though it was short of the super majority the MUD had hoped for.

In a nationally televised broadcast from the presidential palace of Miraflores, Maduro quickly acknowledged the defeat.

"We have come with our morals, our ethics to acknowledge these adverse results, and to accept them, and to say to Venezuela that the constitution and democracy have triumphed," said Maduro.

Maduro also spoke highly about the country's electoral process, saying "it has been a perfect system...without a doubt one of the most wonderful creations of the past 17 years."

Henrique Capriles, a former presidential candidate and one of the leading figures in the opposition coalition, tweeted that "We won Venezuela! We always said that this was the way, humility, maturity and serenity."

Capriles, current governor of the state of Miranda, lost to Maduro in the 2013 presidential race. After his loss to Maduro, Capriles refused to conceded defeat, sparking months of violent protests that left 11 people dead.

"Start the countdown. The government is falling apart, it will have trouble reaching its end," said Allup.

Some 75.25 percent of the country's nearly 19.5 million eligible voters went to the polls on Sunday in one of the most watched legislative elections in recent years.

The results meant the ruling leftist coalition will have to govern with 52 fewer seats in parliament than it had during the 2011-2015 legislative period.

The MUD, meanwhile, has won 30 more seats, gaining a simple majority, defined as half the 167-seat assembly plus one, with a total of 84 legislators.

Holding a simple majority gives the MUD the power to elect the president and vice president of the parliament, as well as to call for referendums or propose impeachment proceedings against the country's president.