Oppressors, get your knees off our necks 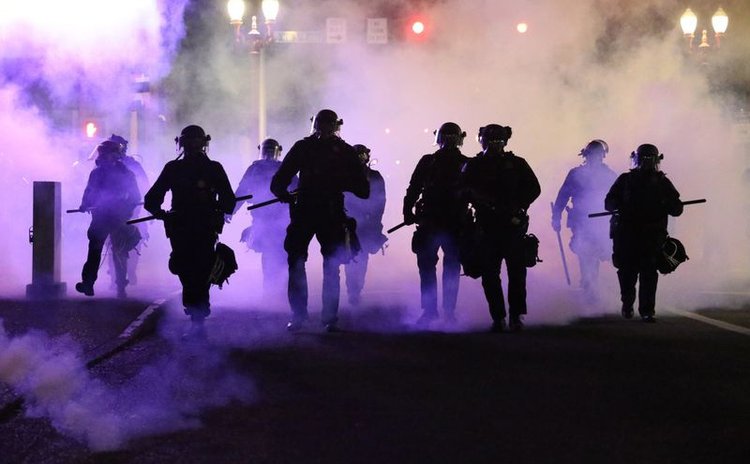 The cruelty of George Floyd's death, captured in a shocking video that shows the white Minneapolis police officer Derek Chauvin casually kneeling, with his hands in his pockets to boot, on the victim's neck for more than eight minutes, has spurred national and international disturbances.

"I can't breathe," Floyd cried and called for his deceased mother before he died from asphyxiation.

Since Floyd died on May 25, demonstrations have erupted in scores of cities across the United States and elsewhere to the cause of racial justice and an end to police brutality. The vast majority of the protests have been peaceful, with simple demands handwritten on torn pieces of cardboard.

But no one captured the agony of racial discrimination against black people for hundreds of years better than the civil rights leader Reverend Al Sharpton. In a eulogy for Floyd last week Sharpton said the knee pressing down on Floyd's neck has been the story of black Americans for generations.

"The reason we could never be who we wanted and dreamed of being is you kept your knee on our neck," he said. "It's time for us to stand up in George's name and say: get your knee off our necks."

Amplifying Dr. Martin Luther King's axiom, "an injustice anywhere is a threat to justice everywhere", people all over the world condemned the systemic racism in the United States.

Even Pope Francis joined in the condemnation of the act of killing Floyd and the widespread racism that is corroding the soul of white America.

"Dear brothers and sisters in the United States," Pope Francis said in a statement. "I have witnessed with great concern the disturbing social unrest in your nation in these past days, following the tragic death of Mr. George Floyd.

"My friends, we cannot tolerate or turn a blind eye to racism and exclusion in any form and yet claim to defend the sacredness of every human life. At the same time, we have to recognize that "the violence of recent nights is self-destructive and self-defeating. Nothing is gained by violence and so much is lost,"

In the Caribbean, sportsmen such as Chris Gayle and Darren Sammy; academics such as Sir Hilary Beckles; politicians such as Dr. Ralph Gonsalves and religious leaders such as Bishop Malzaire, identified with the cause of the protests.

For instance, Sir Hilary, the vice chancellor of the University of the West Indies and Chairman of the CARICOM Reparations Committee said the "soul of the world is awakened" by the outpouring of raw emotion following Floyd's killing. "This week every person on the planet who carries a spirit of love for humanity has become a protesting priest. We need our prophets now more than ever. The 'old pirate has robbed I' once again. And yet we shall rise," Sir Hillary said.

Dr. Ralph Gonsalves, the Prime Minister of St. Vincent and the Grenadines, in a statement, offered the US assistance in solving its racial problems, although "Comrade Gonsalves" was probably having a chuckle when he wrote that line in the statement. He knew no one would take him seriously on that score.

"The government and people of St. Vincent and the Grenadines know, for sure, that no bombs, guns, bullets, bullying, coercion, political manipulation or such levers of state power can resolve the challenges arising from racial injustice and inequality, nor can those instruments of state facilitate the achievement of long­ lasting liberty, justice, peace, and social harmony," Dr. Gonsalves wrote. "Another, better path is possible".

Arguably, the struggle of African-Americans is directly connected to the fight of their brothers in the Caribbean. Tens of thousands of people of Caribbean origin live in the United States and are contributing productively to that society. Most importantly there is the common ancestry between African-Americans and the vast majority of Caribbean people especially their shared history of slavery. Moreover, Caribbean personalities have not only asserted our common humanity, but have been active participants in the African-American struggle especially during the civil rights movement of the Sixties and Seventies. For example, Harry Belafonte (a confidant of Dr. Martin Luther King) has Jamaican roots and black power activists Kwame Ture, whose first name was Stokely Standiford Churchill Carmichael, was born in Trinidad. Marcus Garvey, the famous Jamaican, began his "revolution of the mind" in the US and Reggae- great Bob Marley's influence and his fight against injustice reverberated in the USA and all over the world.

In fact when it was Marley who popularized the prophetic words of Ethiopian emperor Haile Selassie, in the song "War" that captures the essence of the origin of racism and injustice against blacks and the destructive nature of injustice in America, in the Gazza in the Middle East, in South Africa.

"Until the philosophy which holds one race superior and another inferior is finally and permanently discredited and abandoned, everywhere is war. And until there are no longer first-class and second-class citizens of any nation, until the colour of a man's skin is of no more significance than the colour of his eyes. And until the basic human rights are equally guaranteed to all without regard to race, there is war. And until that day, the dream of lasting peace, world citizenship, rule of international morality, will remain but a fleeting illusion to be pursued, but never attained... now everywhere is war."

Black people around the world have been screaming for centuries to their oppressors: "I can't breathe".

Four hundred years is more than enough time for racists to get their knees off black people's necks.