Organic farming is no picnic 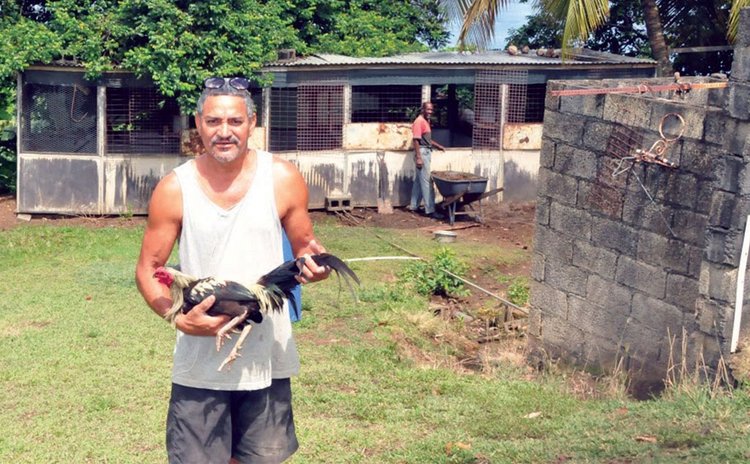 Andrew Green holds one of his chickens

Green, 58, son of the late Daniel Green, knows exactly what health-savvy consumers want because he shares their beliefs and lifestyle. Like his father before him, he raises livestock, poultry and grows vegetables the "natural" way – without harmful chemicals.

Organic farming is serious business, Green said. He raises an impressive variety of livestock and poultry-- pigs, chickens, pigeons, rabbits and ducks. He also grows and sells tomatoes, celery, cabbage, lettuce and many more crops. It's no picnic.

As more consumers seek healthy alternatives to imported meat and vegetables, there is a heavy workload on the organic farm, which keeps Green busy. In particular, he does a lot of work just to keep up with the huge demand for local chickens from his farm.

"The market is forever good; there is never enough local meat that you can supply . . . on the local market," he said. He pointed out that a surge of Chinese immigrants in Dominica has created a higher demand for locally grown ducks. In fact, the demand for ducks constantly outpaces the supply.

"In Dominica [the Chinese] really source ducks" he said, indicating that, unlike other consumers, they do not buy ducks just for special occasions. They buy them all year round and their demand is more than one Dominican poultry farm can supply, he said.

This feature of the poultry market has influenced Green to give up the idea of raising turkeys, simply because he thinks it would be too costly and the demand is not big enough. Raising chickens and ducks requires similar methods and food, he said, but turkeys have different needs and raising them is more difficult and costly.

"There is no real difference in raising chickens and ducks . . . only that they need different environments. A duck, for instance, will need as much water as it can find . . . a chicken, on the other hand, prefers to be dry," Green pointed out.

He explained that there is only a seasonal market for turkeys, once a year to be exact. "It is not cost effective. The market for it is not available . . . It may happen once a year, but to do it on a daily basis it is not cost-effective. Feed is extremely expensive, housing also and you have to have certain vaccinations," he added.

The farmer went on to say that the chickens he raises on his farm have acquired a natural immunity to many poultry diseases, which is further built up over time and is passed on to their offspring through the gene pool.

Despite his success in organic farming, Green said he and other farmers face several ongoing challenges. According to him, raising livestock and growing produce the natural way in Dominica is a hard road to travel and he still has a long, long way to go.

"Climatic changes . . . new diseases . . . vaccines that are not available; there are different strains, there are so many bumps on that straight road . . . it makes it almost impossible to go on a commercial basis," he lamented.

One of his biggest challenges is buying the necessary feed for the animals and poultry on his farm. "The cost of feed is extremely expensive . . . there are no subsidies," he complained, and he is calling on Government to give farmers more assistance.

Farming the natural way requires plenty determination and effort. Green said he is thankful that he gets a lot of help from an old schoolmate, George Williams. Together, they have accepted the challenge of helping local organic farming soar to new heights.