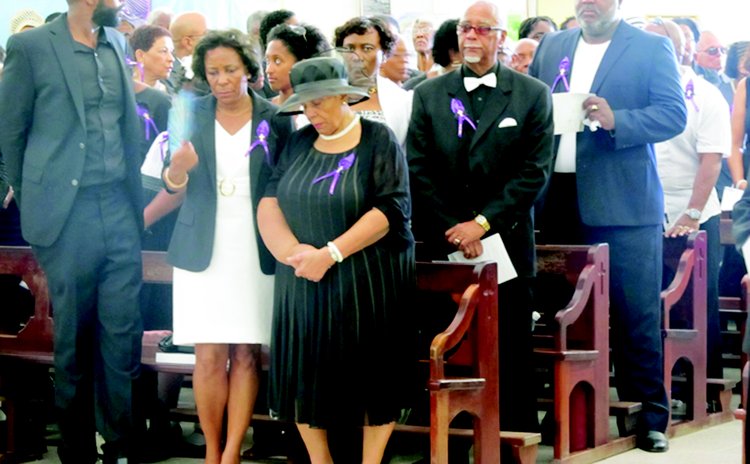 Seventy-five year old career civil servant Frederick Osborne George Symes also known as Ossie and Sam Bass was laid to rest at the Roseau Catholic Cemetery on Monday March 25, 2013 following the celebration of his life with the Holy Eucharist at the St Alphonsus Catholic Church in Pottersville.

State flags flew at half staff in salute to this dedicated son who received a State Funeral.

A packed choir loft added to the occasion in lusty and melodious tones as the final rites of the earthly existence of Ossie Symes unfolded.

Monsignor Thomas took the opportunity to remind politicians to put aside their grievances and join in the development of the country. He also urged talk show hosts to discuss matters beneficial to the country instead of sowing seeds of division.

Symes died of a heart condition at the Princess Margaret Hospital during the evening of Tuesday March 12.

He was born on August 31, 1937 to Carmen and Frederick Symes. Ossie attended the Roseau Boys' School on a scholarship, and went to the Dominica Grammar School. On completion of his education he taught at the DGS, before moving to the Audit Department. This was followed by a stint in where he studied Public Administration. He returned to Dominica and was assigned to the Treasury Department. He became Accountant General, moved on to the Audit Department as Director. He served as permanent secretary in many ministries and eventually moved on to become Chief Personnel Officer.

During those years as a civil servant he played his part in the development of the Civil Service Association (presently the Public Service Union). During that period he was a member of Blackburn Sports Club. He was also a farmer at his holding at Sultan and would spend many happy days there during and after retirement from the government service.

Then he accepted an invitation from the United Workers Party to be Speaker of the Dominica House of Assembly (1995-2000). Ossie Symes married Nurse Stella Green in 1970. They had three children: Dawn, Brian and Brent; and he had another son, Geoffrey. He is also survived by three grandchildren.

Symes Zee, who migrated to the United States where he immediately joined the army before returning to Dominica to invest in the private sector, described his older brother as a principled and a very intelligent person. He was well read and articulate. He was a guy who dealt with issues, issues that were solid and beneficial to everybody, not to just a certain few, and that is why he was so involved in the CSA. When he did a job he made sure it was done well. He loved his family. He loved his children having been nurtured to be family oriented.

Symes Zee said he loved his brother dearly and would definitely miss him. Ossie loved a joke. He wasn't a drinker or a smoker. He was just a kind of a cool, quiet collected person. He loved people. He wanted to see things just work out in an amicable way.

Ossie Symes's daughter, Dawn, told The SUN that her dad was a loving, caring, dedicated and committed person. He was someone you could talk to, he was very understanding. He helped his children in any possible way that he could. And he was just a great dad, one that would do anything for his children even as far as putting his life on the line.