Our visit to Rome with President Savarin 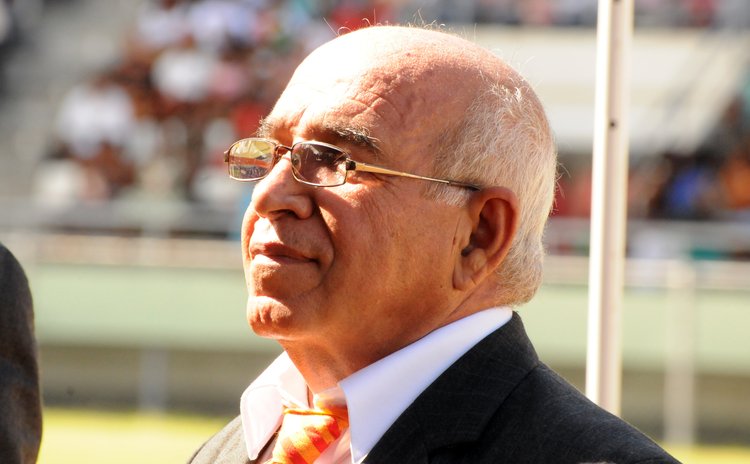 The telephone call to me on Thursday 7th January by the President's Secretary informing me that the President had requested her to extend an invitation to me and my wife to accompany him as a member of his delegation to be received by Pope Francis at the Vatican came as a bolt from the blue. I immediately and enthusiastically accepted the invitation. I later learned that a similar invitation had been issued to Dr. and Mrs. Grell, Francis Emanuel and Mrs. Emanuel, Baroness Scotland who was already in Rome on some other assignment, and Mrs. Wendy D'Angieri, the daughter of Vanoloust Jno Charles, who lives in Rome with her family.

To be invited to the Vatican to have an audience with the Pope is a unique, once in a lifetime opportunity, and my wife and I and all of us who were invited by the President to form part of his delegation to Rome will be eternally grateful for the set of circumstances which made this possible.

In discussions with President Savarin we were informed that confirmation of His Excellency's visit was received by way of a Diplomatic Note issued by the Papal Nuncio in Trinidad dated 29th December 2015, advising that the President would be granted an audience with Pope Francis on Friday 22nd January 2016. The Note also advised that the President could be accompanied by five persons in his audience with the Pope, three of whom could also accompany the President in his audience with the Secretary of State, Cardinal Pietro Parolin, which would take place immediately following the meeting with Pope Francis.

In His Excellency's discussions with the Bishop of Roseau the Most Reverend Gabriel Malzaire, and the Bishop's discussions with the Papal Nuncio it was advised on the 5th of January that the limitations in the size of the delegation was not an absolute maximum and that as many as 10 to 12 persons could accompany the President in his meeting with the Pope and up to 5 persons in his meeting with the Secretary of State. President Savarin over the following two days extended his delegation to 2+9. These are the fortunate set of circumstances which allowed us to be invited to accompany the President. The President's Office and the High Commission in London were very helpful in assisting us in making travel arrangements and hotel reservations.

Each of us was responsible for meeting all of the expenses involved in our visit to Rome.

At the initiative of the President the entire delegation met with Bishop Malzaire at the State House on Tuesday January 19th, the day before our departure for a briefing and a prayer for a safe and successful visit which we all regarded as a pilgrimage of faith.

The trip itself was wonderful. We gathered at the VIP Lounge at Douglas-Charles on Wednesday 20th and departed Dominica for Antigua on the 4.00 pm LIAT Flight. On arrival in Antigua 40 minutes later, we were received by Protocol ‎at the airport and escorted to the VIP Lounge where we were assisted with our checking-in arrangements. We departed Antigua on British Airways about 7.00 pm and on arrival at London Gatwick, we were again met by Protocol and whisked away to the VIP Lounge to be processed. Because of the length of the layover we booked rooms at the airport hotel and returned to the VIP Lounge in time to be checked-in before boarding the BA flight for Rome. On arrival in Rome we were met by Protocol, escorted to the VIP Lounge and after our luggage had been secured we were driven in official vehicles with police escort to our hotel in Rome not far from the Vatican. On arrival at the hotel we were met by Baroness Scotland and Wendy and her husband Marquis D'Angieri.

The next morning we set off in official vehicles with police escort to the Vatican. We were early and took the occasion to visit the Vatican Gardens and the Grotto of Our Lady of Lourdes which is a replica of the one at Lourdes in France, built on the grounds of the Vatican by Pope John Paul. Whether one is a Catholic or not, a believer in the appearances of the Blessed Virgin or not, one could not help but marvel at the details of the reconstruction of the Grotto as a place of peace, tranquility and prayer.

At 10.30 am we proceeded to the Apostolic Palace where we were to meet with the Pope. On arrival we were met‎ by Archbishop Georg Gonswein, Prefect of the Papal Household and an Honour Guard of Vatican Nobles resplendent in formal attire with a chestful of medals. The President and Mrs. Savarin were greeted by Archbishop Gonswein and the President in turn introduced each of us. We were then escorted by an Honor Guard of the Nobles and the Swiss Guards in all of their traditional and splendid uniforms as seen on television. We were brought into a waiting room where we were advised that the President would first have a private audience with Pope Francis and then we would be invited to meet His Holiness.

The President and the Pope must have had a very cordial and interesting meeting as we seemed to be waiting for a while and the Cardinals waiting with us walked to and fro. Then Mrs. Savarin and the rest of us were invited into the private meeting room to meet the Pope and the photographers followed. We were introduced one by one‎ by His Excellency, first Mrs. Savarin, then Ambassador Lambert, followed by the rest of us.

It is impossible to put into words the experience and the emotions of standing face to face with the Vicar of Christ on earth, of shaking his hand, kissing his ring, speaking to him. His Holiness places you at ease with his charm, his warm smile and his humility. He had a brief exchange with us, and then there was an exchange of gifts. His Excellency presented the Holy Father with an exquisite carving of a Sisserou Parrot produced by Albert Casimir and a Coffee Table Book of Photographs of Scenes in Dominica produced by Cecil Clarke. His Holiness presented His Excellency with a bronze plaque of St Martin depicted wearing ancient Roman armor and tearing off part of his cloak and giving it to the poor. The work is by Maestro Guido. His Holiness also presented President Savarin with copies of his Encyclical, Evangelii Guad‎ium and his Encyclical Letter, Laudato Si.

After the presentation of gifts we assembled once more with His ‎Holiness where he blessed rosaries and other religious items which we had brought along with us. The Holy Father presented each of us with a rosary each in its individual case and a medallion of the Holy Father's insignia. After the taking of photographs and another brief exchange, the audience was over and we were escorted out of the room. We all had a sense that something extraordinary had happened which will remain with us always. We were then escorted to another part of the Apostolic Palace where the President along with Ambassador Lambert had a private audience with the Secretary of State, Cardinal Pietro Parolin, accompanied by Archbishop Paul Richard Gallagher, Secretary of Relations with States. After the private audience we were introduced one by one to the Secretary of State and Archbishop Gallagher, and escorted once more by the Honor Guard, we left the Apostolic Palace to undertake a guided tour of the Vatican Museum.

There were several tours taking place at the same time with hundreds of persons divided into groups each with a tour guide, but again we were given the royal treatment as we were allowed access to closed off sections and the other tours were asked to step to one side to allow us free passage. The time available to us did not do justice to the richness of the historical artifacts and exhibits which make up the Vatican Museum, spanning over 2000 years of the history of the church and of human civilization. One does not have to be a Catholic to appreciate the richness of the experience of visiting ‎the Vatican Museum.

We left the Vatican to have lunch with Mrs. Letizia Moratti, the former Mayor of Milan who is also a former Minister of Government. Mrs. Moratti was instrumental in sourcing one dozen or so school buses for Dominica in‎ 2006. She had a working lunch with President Savarin and Mrs. Savarin, Ambassador Lambert, Baroness Scotland, Wendy and her son Staphan and her husband Marquis Nunzio Alfredo D'Angieri. The rest of us were seated at another table but we understand that the discussions were about the work of Mrs. Moratti's foundation and how the foundation could be of assistance to Dominica.

After lunch President and Mrs. Savarin, Ambassador Lambert, Baroness Scotland and Mrs. Moratti were driven to the Foreign Ministry where they met with Foreign Minister Paolo Gentilone and senior officials for discussion on bilateral matters between Dominica and Italy. Meanwhile the rest of us visited the Piazza di Spango, a square at the base of the Spanish Steps where the whole team reassembled for a visit to St Peter's Basilica. We were able to visit the tomb of St Peter where we said a prayer and also walked pass the tombs of the Popes who are entombed beneath the Basillica. We were amazed as we walked throughout the Basilica and gazed on all the many wonders of that most wonderful of Cathedrals. We prayed in the Chapel of John-Paul who was recently cannonised as a saint.

That evening we visited the Colisseum and walked around its imposing walls. There were several other visitors doing the same thing.

The next day we left Rome for London where we received the same VIP treatment all the way back to Dominica.

Our visit to Rome was truly a privilege and we thank His Excellency President Charles Savarin for the ‎opportunity.

Mr. Raffoul is a founding member of the President's Charities Foundation established by Former President Liverpool in 2004 and has been Chairman since 2012.