Police arrest Dr. Thompson Fontaine as he arrives at Douglas Charles Airport from Africa and treats him like a common criminal, opposition forces say 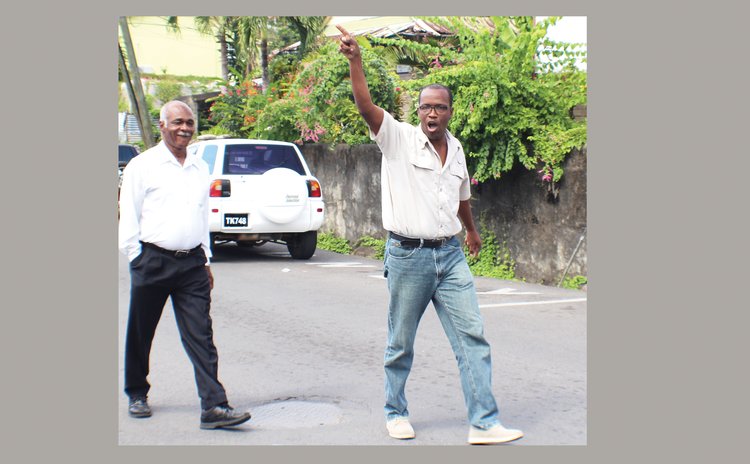 With lawyer Gildon Richards close behind Dr. Fontaine leaves police headquarters after the first arrest in 2017

After arresting Dr. Thompson Fontaine as he landed at the Douglas Charles airport on Saturday, two days later the police transported him to the magistrate court in Roseau.

Up to press time on Monday afternoon, Dr. Fontaine and his lawyers were facing a prolonged bail-granting process.

Hundreds of protesters were gathered outside the Roseau courthouse.

On Saturday, it was a scene that one individual who was present at the Douglas Charles Airport described as 'humiliating," how Dr. Fontaine, former United Workers Party (UWP) senator, and former International Monetary Fund (IMF) economist was arrested for a bench warrant issued for his arrest in 2018.

The warrant stems from Dr. Fontaine's absence for two court appearances in 2018 after obstruction charges were brought against him, Leader of the opposition Lennox Linton.

Dr. Fontaine, who for the past four years, has been employed as Economic and International Policy Adviser to the government of South Sudan, Africa was part of a protest meeting held on February 7, 2017, against the government's management of the Citizenship by Investment (CBI) programme and the issuance of diplomatic passports to persons who later ended up on the wrong side of the law.

A few hours after the protest meeting ended hordes of rampaging youth burnt garbage in the streets, looted stores, and broke glass windows in Roseau, the capital. Police used tear gas to control the situation.

Prime Minister accuses the opposition of planning a coup

The opposition scoffed at Skerrit's accusation but has since been dragged to court.

Since then the court has adjourned "sine die" (without a date for resumption) the obstruction matters against General Secretary of the UWP Nicholas George, Linton, past prime minister and former UWP leader, Edison James, attorney at law, and former UWP Deputy leader Joshua Francis and now Speaker of the House Joseph Isaac.

However, the next hearing on charges of incitement against Linton and Dr. Fontaine was set for January 22, 2019, and because of Dr. Fontaine's previous absences, the presiding magistrate granted the prosecution's request for a bench warrant for Dr. Fontaine who was not present at the two court hearings which had so far been held.

On Saturday afternoon (23 April 2022) upon his arrival in Dominica, Dr. Fontaine, who contested the Grand Fond constituency on a UWP ticket in 2014 was picked up and placed in a cell in the Police Headquarters in Roseau. That cell has been described by persons who have experienced it as one of the filthiest.

A team of lawyers convinced Magistrate Gloria Augustus who has the judicial authority to preside over the matter to hear the case in hopes that Fontaine would be released that evening. However, the police denied that request. The reaction has been swift. Hours following the announcement of his arrest several opposition forces and citizens gathered outside of police headquarters in Roseau on Saturday and Sunday demanding that Dr. Fontaine be released.

This isn't the first time that Dr. Fontaine has landed himself in police custody for this incident. He was first taken in by the police on Sunday, February 12, 2017, around 2:00 pm and brought to Police Headquarters, but was released after almost five hours of questioning.

Presently, the charge for alleged incitement by opposition leader Linton is still ongoing. The charge is that between January 22, 2017, and February 7, 2017, Linton unlawfully incited people…and jeopardized the public safety order and public peace following a public meeting in Roseau on February 7, 2017, calling for the resignation of Prime Minister Roosevelt Skerrit.