Over one million people stage massive anti-Trump protests across U.S. 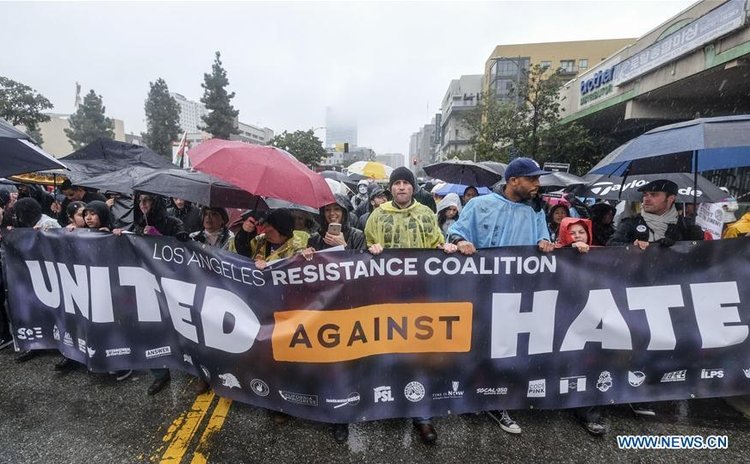 People hold a protest against the inauguration of Donald Trump as the new U.S. president, in Los Angeles Jan. 20, 2017

Over one million people stage massive anti-Trump protests across U.S.

NEW YORK, Jan. 21 (Xinhua) -- Over one million people Saturday took to the streets and staged rallies across the United States to protest against President Donald Trump's first full day as the 45th U.S. President.

Carrying signs that said "Dear Trump Don't be the person we think" and "I wish your inauguration was fake news!." More and more people lined the streets on the 42nd Street and 58 Street, waiting for taking part in the Women's March on NYC. Police have already blacked the roads.

At the New York march, Bridget Mills, 41, told Xinhua "I hope it sends a message (to Trump) that we're listening, we are paying attention to if he cares morally about people's civil rights and America's standing in the world."

Gengil, in her 20s, lives in Halem, black, marching with five of her sisters, said "our diverse America is inclusive, resilient, brave, and it is for white, black, latino, Asian etc., this is the message we want to send to President Trump."

Demonstrators had planned to take their rally cries to the doors of Trump Tower, but police stopped them south of the building on East 55th Street.

In Washington, D.C., about half a million people showed up for Women's March in the country's capital to challenge the new U.S. president. "We march today for the moral core of this nation, against which our new president is waging a war," actress America Ferrera told the Washington crowd.

"Our dignity, our character, our rights have all been under attack, and a platform of hate and division assumed power yesterday. But the president is not America.

Marchers took to the streets near the National Mall in Washington, D.C., calling for women's rights and voicing their opposition to the newly-inaugurated President Donald Trump.

Brandishing signs that read "women's rights are human rights" and "Hear our voice", protesters from across the country marched slowly along major avenues in downtown Washington as they chanted "this is what democracy looks like" and "women and girls can change the world," in a powerful display of rejection of Trump's agenda and what they said his insulting attitudes towards women.

"I am very, very concerned about the next four years. I think we have a lot of rights that are going to be trampled on under the Trump administration," said Elisabeth Moore, a protester from New Haven, Connecticut. "His bigotry and his views towards women are extremely troubling to me."

Moore also spoke unfavorably about Trump's inaugural address on Friday, calling it "disgusting" and saying that it was part of the reason for the huge turnout on Saturday.

The organizers had initially sought a permit for a gathering of 200,000, but they estimated that as many as a half million people participated the event in the nation's capital.

The marchers packed the metro stations in downtown Washington on Saturday afternoon, with the Washington Metropolitan Area Transit Authority recording more than 597,000 trips as of 4 p.m..

In Los Angeles, more than 500,000 of protesters Saturday rallied and marched peacefully through downtown Los Angeles chanting "Love Trumps hate", one day after Donald Trump was sworn into the Oval Office.

LA's gathering was a part of Women's March, a national wide protests triggered by the new President of United States, who continued his angry railing against liberals supporting mostly Hillary Clinton in elections last November.

Protesters showed their different appeals with colourful placards saying "Trust the progress", "Love not hate makes America great", "Get your tiny hands off my rights" and even "No more oil."

"We want to let him know that he has been divisive, but yet we are still promoting women's rights, promoting gay rights, promoting pro choice, promoting the United States, not discriminating on the base of race, sex, or religion," Cheryl Lacour, an female attorney told Xinhua.

Chertl said she and her friends accepted the result of the election, so they joined the protests across the country to fight for the future instead of the past.

"We want to make this new president accountable," she said, "Today is to let him know what he has to face on the first day in his office."

In front of the City Hall, Jesse Turk told Xinhua, as a gay man he was terrified since Trump was elected, saying "this is a march to show our visibility and show the fact that we don't agree with what's going on, what he's doing, how he's doing and who he has chosen to do it."

The Los Angeles Police Department (LAPD) estimated that 500,000 took part in Saturday's march however organizers insisted the number was higher.

In Chicago, around 250,000 people joined Women's March on Chicago, organizers said. Hudreds of thousands of people flocked to downtown Chicago to join the march.

The event was said to be the largest women's march outside of the March on Washington, organizers said.

The protest drew participants from all walks of life: young and old, academics and laborers, even parents with children on their shoulders.

Protesters are still arriving at the rally, many with signs critical of President Donald Trump.

An estimated 22,000 staged protests in Houston against Donald Trump.

By afternoon, the protest rallies had been peaceful.