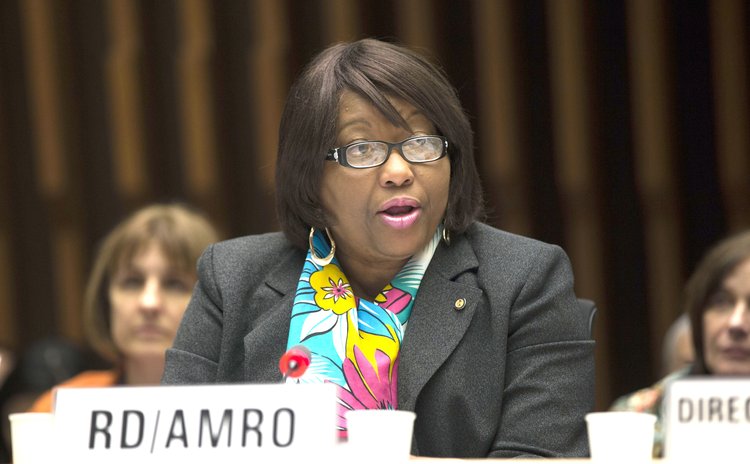 Geneva, 28 January 2016 (PAHO/WHO) — Zika virus is spreading rapidly through the Americas and could potentially reach all countries except Canada and continental Chile, the Director of the Pan American Health Organization (PAHO), Dr. Carissa F. Etienne, told health officials from around the world today during a briefing of the Executive Board of the World Health Organization (WHO) in Geneva.

Etienne added, however, that the countries of the Americas have been responding robustly to the Zika threat in collaboration with PAHO/WHO and other international partners. This cooperation will continue as countries work to mitigate the impact of Zika on people living in PAHO/WHO member countries. The most important prevention is effective mosquito control, which requires action by national and local governments but also by individuals, families and communities to eliminate potential mosquito breeding sites in and around homes, workplaces and schools.

"PAHO is a region with long experience in tackling mosquito-borne diseases, including dengue and chikungunya," Etienne said. "I congratulate Brazil --and all the other 21 countries in the Americas-- for their prompt reporting under the International Health Regulations." IHR, as the regulations are known, is the WHO-managed global system through which Member States report on outbreaks of potential international concern.

WHO Director Margaret Chan announced she would call a meeting of the IHR Emergency Committee on Feb. 1 to discuss the Zika epidemic and what needs to be done at the global level to address the disease. The committee will ascertain whether the outbreak constitutes a Public Health Emergency of International Concern.

Since May 2015, 22 countries and territories in the Americas have reported to PAHO/WHO local transmission of Zika virus infections. PAHO/WHO anticipates that the virus is likely to spread to all countries in the region that have Aedes mosquitoes, the mosquitoes responsible for transmitting the virus. The mosquito is present in all of the region except Canada and continental Chile.

Etienne noted that proactive collaborative action on the outbreaks at the regional level has been ongoing since Brazil first reported local transmission of Zika to PAHO in May 2015. PAHO/WHO has been working closely with affected member countries since then, mobilizing staff and members of the Global Outbreak and Response Network (GOARN) to assist ministries of health in strengthening their abilities to detect the arrival and circulation of Zika virus through laboratory testing and rapid reporting. The aim has been to ensure accurate clinical diagnosis and treatment for patients, to track the spread of the virus and the mosquito that carries it, and to promote prevention, especially through mosquito control, which is key.

PAHO/WHO has been working with member countries for a number of years on vector control and in the coming weeks will convene experts from throughout the Americas to discuss new, more effective and integrated mosquito control strategies that would help reduce not only Zika infections but also cases of dengue, chikungunya, yellow fever, and West Nile virus—all of which are spread by mosquitoes and are significant public health problems in the Americas.

PAHO/WHO is also supporting scaling-up and strengthening of surveillance systems in countries that have reported cases of Zika, and of microcephaly and other neurological conditions that may be associated with the virus. Surveillance is also being heightened in countries to which the virus may spread.

In addition, PAHO/WHO has been working with Brazilian health authorities, the Oswaldo Cruz Foundation (Fiocruz) in Brazil, and the U.S. Centers for Disease Control and Prevention (CDC) to support research and investigation on Zika, pregnancy and microcephaly. In the coming weeks, PAHO/WHO will convene experts to address critical gaps in scientific knowledge about the virus and its potential effects on fetuses, children and adults.

In a press briefing following Etienne's presentation, PAHO/WHO experts explained that reliable case counts of Zika virus infection were difficult to obtain for several reasons: only around 1 in 4 infected people develop symptoms; the virus is only detectable for a few days in infected people's blood; tests for antibodies—which can be detected for a much longer period after infection—cannot distinguish well between Zika and infections with similar viruses such as dengue and chikungunya; and clinicians face major challenges in distinguishing Zika cases from cases of diseases such as dengue and chikungunya, which have similar symptoms.

Although Zika infections typically cause only mild symptoms, concerns have been heightened by Brazil's reports of an unusual increase in microcephaly—unusually small head size--in babies born in areas where the virus is circulating. Since October, Brazil has reported more than 4,000 suspected cases of microcephaly in areas with Zika circulation. Other complications aer also suspected of being linked to the virus, including Guillain–Barré syndrome, an autoimmune syndrome.

"Many unanswered questions remain about the links between Zika virus disease, microcephaly and Guillain–Barré syndrome," noted Etienne. "Although we are still working to establish causality with Zika, we cannot tolerate the prospect of more babies being born with neurological and other malformations, and more people facing the threat of paralysis due to Guillain–Barré syndrome. We must all work together to prevent the further spread of this potentially debilitating disease."