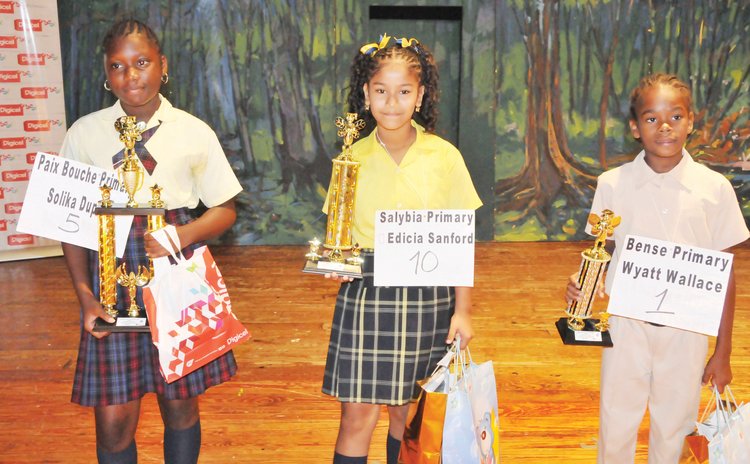 Winners of the competition pose with their awards

The Paix Bouche Primary has won the competition for the fifth consecutive year.

The competition was held at the Arawak House of Culture on May 11, where ten primary schools participated in a 16-round competition.

The competition was a collaborative effort of the Ministry of Education, the Division of Culture, the National Cultural Council and the Komite Pou Etid Kweyol (KEK).

In second place of the competition went Edicia Sanford of the Salybia Primary and Wyatt Wallace of the Bense Primary won the third place.

Speaking on behalf of the Chief Education Officer Melena Fountain, Education Officer for the West Margaret Royer said that despite the influence of modernization and persons' attitude towards the speaking of the Creole, the language is still alive in Dominica.

"Regardless of some critics who say that the speaking of Creole adversely affects the speaking and writing of standard English we are here today to prove to them that they both can go hand in hand," she said.

In addition, Royer said that as educators the challenge is being able to use both languages in the classroom while ensuring that it is marketed and managed properly.

Meanwhile, the Chairman of KEK Raymond Lawrence said "The work of KEK is very important for cultural and heritage development in Dominica. KEK has been playing a very vital role especially in the promotion of the Creole language."

He noted that language is an essential part of Dominica's culture and the use of the Creole language aids in the smooth flow of communication with the neighbouring islands of Martinique and Guadeloupe as well as the Haitians who are here in Dominica.

"The Creole language has been part of the roots of our culture and it has formed the basis of most of our folk songs and is now featured in our radio and television news programming," said Lawrence.

Lawrence said that the next initiative of KEK is the inclusion of the Creole language within the national curriculum.

"In that way we will help ensure the future promotion and preservation of the language," he said.