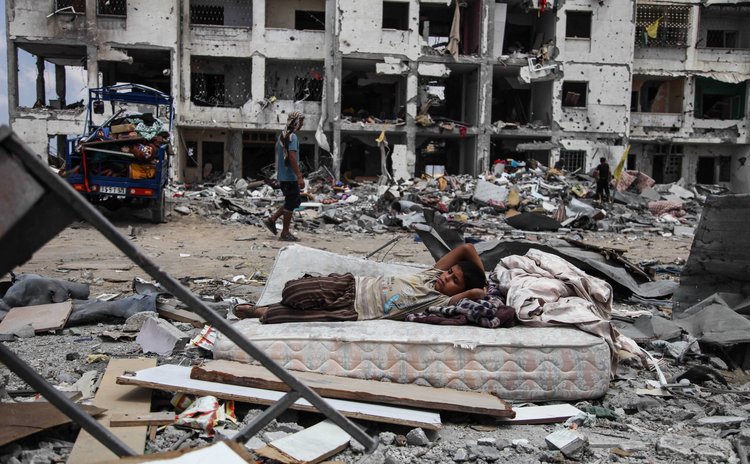 GAZA STRIP, Aug. 4, 2014 (Xinhua) -- A Palestinian boy rests on a mattress as he collects belongings from his destroyed house in the northern Gaza Strip town of Beit Lahiya, on Aug. 4, 2014

CAIRO, Aug. 4 (Xinhua/Sun) -- A Palestinian delegation in Cairo that includes Gaza-ruling Hamas movement agreed a 72-hour truce starting from 05:00 GMT of Tuesday, head of the delegation Azzam al-Ahmed said in a statement on Monday evening.

"The delegation told the Egyptian leadership the Palestinian side's approval of Egypt's invitation for cease-fire in Gaza Strip for 72 hours truce starting from Tuesday 05:00 GMT," the leading Fatah member said.

On the other side, a diplomatic source said that Israel also agreed to renew a previously-breached 72-hour humanitarian truce and will send a delegation for talks in Cairo, according to state- run Ahram news website.

Earlier on Monday the Egyptian Foreign Ministry called the Palestinians and the Israelis for a three-day "extendable" cease- fire starting from Tuesday early morning, during which delegates from both sides will be engaged in Cairo-brokered indirect negotiations.

Israel's ongoing offensive on Gaza, which started on July 8, has left more than 1,850 Palestinians killed, mostly civilians, and over 9,550 wounded, while Hamas attacks have also killed 64 Israeli soldiers and three civilians, according to Israeli reports.

In mid-July, Egypt proposed an initiative for a cease-fire in Gaza that was initially accepted by Israel, but Hamas rejected it, saying the proposal was not comprehensive and without guarantees for ending the Israeli blockade of the strip.

Israel, however, has refused to send a delegation to Cairo for talks on a truce with the Palestinian side. Israeli Prime Minister Benjamin Netanyahu said in a televised speech on Saturday that the military campaign on Gaza will continue "as long as necessary."