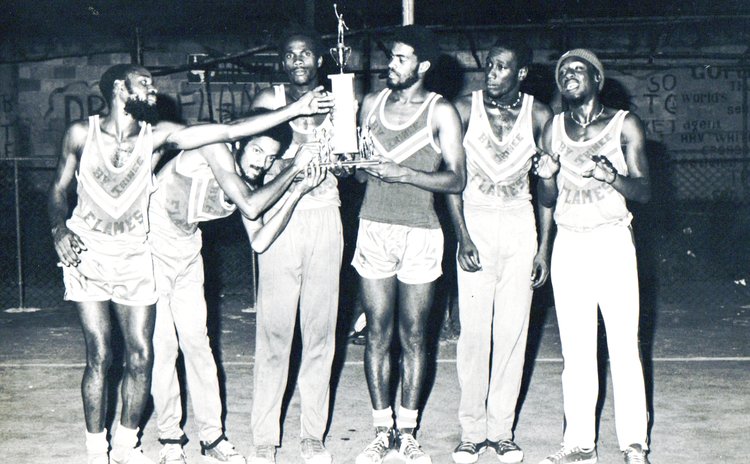 FLAMES won Division I League, Knockout and Play-Off Championships in the 1980s

Jump Ball article #88, the first part of this CHAMPIONS 'series' presented the teams from different divisions of the 'national' basketball league which had won championships during the 13-season period extending from the league's inauguration in 1966 up to Independence Year, 1978.

This current 2-part presentation covers the 11-season period 1982 through 1992. Unfortunately, information was unavailable for the period from the year of Hurricane David (1979) through 1981, although there was no interruption in the staging of the League then.

During the period there was continued growth and decentralization of the sport in Dominica as basketball fans saw the number of divisions in the national league increase from two to five with the introduction of a Women's Division, a Division III, and an Under-16 Division which only saw four teams and lasted one season; the continuation of competitions in Divisions I and II; and the introduction of a Play-Off championship which was held among Division I teams on occasion.

A whopping total of at least 118 teams coming from all across Dominica were distributed among the five (5) divisions of the DABA during the 1982-1992 period, with a heavy turnover rate in Divisions II and III in particular.

So, let's welcome the parade of basketball champions who proudly took home silverware for their efforts during the 1982 through 1992 period.

DIVISION I LEAGUE CHAMPIONS: Cardinals, who had grabbed eight (8) Division I league championships between 1968 and 1978 were forced to relinquish their stranglehold on the League during the period, and so fans saw five other teams also standing on the top level of the podium at various times. Cardinals captured the league championship on six occasions: 1982, 1985, 1987, 1988, 1990 and 1992.

DIVISION I KNOCKOUT CHAMPIONS: The Division I knockout competition continued to be an annual feature on DABA programmes, with eleven such championships held during the 11-season period and six teams sharing the spotlight. Once again, Cardinals somewhat dominated the roost and took home almost half of the number of championships during the period, stepping onto the podium no less than five times (1982, 1985, 1989, 1990 and 1992) to receive their award trophies.

DIVISION I PLAY-OFF CHAMPS: The Play-Off competition was introduced only for Division I, in 1982, and five such competitions were held between that year and 1992. All Division I teams participated in the preliminary round of the competition.

Once again, Cardinals demonstrated their dominance in local basketball, capturing four of the five Play-Off Championships (1982, 1987, 1988 and 1989) with Flames grabbing the fifth (1983).

DIVISION II LEAGUE CHAMPIONS: Nine (9) teams were declared Division II champions during the eleven-year period, an indication of the level of competitiveness in that Division. Eagles II won two championships (1985, 1986) whilst Sixty-Sixers from Grand Bay were league champions in 1988 and 1989.

DIVISION II KNOCK-OUT CHAMPIONS: Ten Division II Knock-Out Finals were held during the period, with the eleventh (1983) being cancelled on account of the late arrival of both teams for the match. Division II Knock-Out honours were shared among seven teams, with three each capturing the championship twice. The slightly more successful among those champions were Green City (1982, 1984), Eagles II (1985, 1986) and Hoyas II (1991, 1992).

The teams who went up the podium on one occasion each to receive knockout trophies were Clippers from Soufriere – the first out-of-town team to win such a championship (1987), Clouds (1989) and Raiders from Portsmouth (1990).

This part concludes next edition