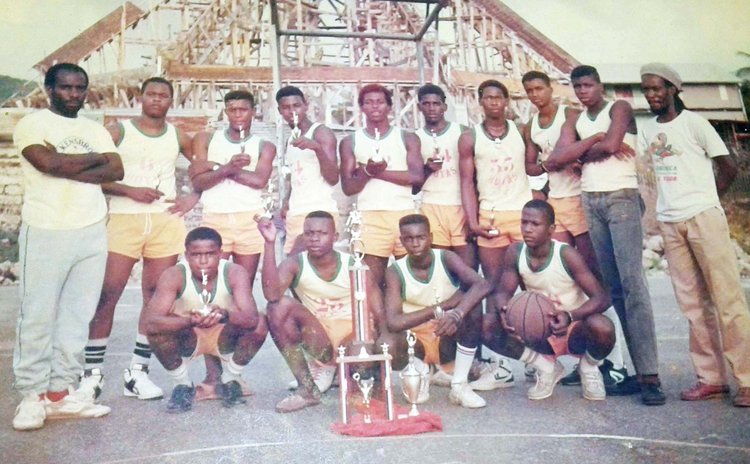 The first segment of this "chapter" of this CHAMPIONS series presented the championship winners in the following DABA basketball competitions: Division I League, Knockout and Play-Offs as well as the Division II League and Knockout champions for the period 1982 - 1992. This "chapter" concludes below.

DIVISION III LEAGUE CHAMPIONS: Between 1982 and 1992 the Division III League competition was held during ten of the eleven basketball seasons, there being no such competition in 1986.

Women's League Champions: Although the first women's team to participate in Dominica's basketball debuted in 1977, a Women's Division was only introduced a few years later, either in 1982 or just prior (1979, 1980 or 1981). In the Division's formative years only three teams competed, and whenever fewer than three registered, the ladies were assigned to the Junior Division to compete against themselves and "the boys".

The Women's League competition was held only four times during the period (1982-1984, 1986), with Pros Sisters from Grand Bay doing a 'three-peat', bagging championships consecutively in 1982, 1983 and 1984. Radials were presented with the Women's Team Award in 1985 and that year, together with Pros Sisters played in Division III against four all-male teams and against each other. Radials won the 1986 women's championship.

Women's Knockout Champions: Only two Women's Knockout competitions were held during the period and the limelight was shared between Saints of Goodwill (1982) and Michelles of Roseau (1983).

'Under-16' Champions: The DABA presented a 16 & Under Division only during the 1988 season with four teams participating, including one from Grand Bay. The championship winners in that Division were St. Mary's Academy (U-16) who captured the League Championship and Hoyas (U-16) who took home the Knockout trophy.

Thrice Is Nice: Only one team succeeded in capturing three major championships in any one season during the period, and this feat was performed by Cardinals when they clean-swept the League, Knockout and Play-Off Championship trophies in 1982, earning full bragging rights.

Double-championships are not "restricted" only to the senior division, and during the period basketball fans saw five (5) Division II teams and three Division III teams walking away with double championships.

Sharing the double-championships limelight in Division III were St. Mary's Academy III, Ogan Stars and Home Boys in 1982, 1985 and 1992 respectively. The Women's Division did not produce a double-champion during the period.

Remarks: The preceding part of this Basketball Champions series, as well as the above presented the league, knockout and play-off champions who reined in Dominica's national basketball league from 1982 to 1992. We also saw the game roster comprising only four teams in the inaugural (1966) season, continuing to grow incrementally to bring the team list in some seasons to exceed 30 teams playing in up to four Divisions.