Parliament to meet without Edison James in 25 years (Part I) 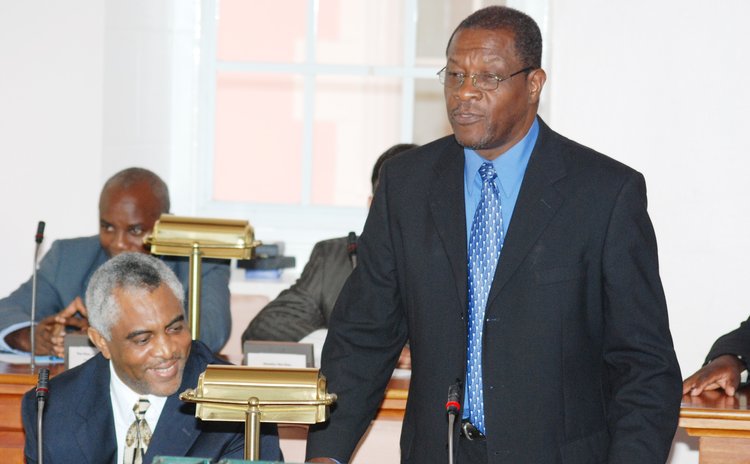 It's 1990, the country is in general election mode and the two established political parties are set for a bruising battle. The Dominica Freedom Party (DFP), led by "The Iron Lady," Eugenia Charles, expects another crushing victory, having won 15 seats in the 1985 poll.

And there's the upstart, the United Workers Party (UWP), formed just two years earlier and led by the former general manager of the Dominica Banana Growers Association (DBGA), Edison James. The UWP is given little to no chance by many, but is confident it can spring a few surprises.

"Remember we were not given much of a chance, we were going up against someone regarded as a giant, not just in Dominica and the region," James told The Sun, referring to Eugenia Charles. "And we had to fight against two parties that were (entrenched)."

Driven by the slogan, Fear No More, the fledgling UWP wins six seats and James walks into parliament for the first time, as opposition leader.

"I was happy I was able to lead the party (to such success) at that time so there was a good bit of satisfaction, because there was a lot of mobilization. This was an exercise which I was the founding leader of, so it gave me a good deal of satisfaction getting into parliament."

James political rise was swift, made easier by the fact that his was a familiar name across Dominica due to his involvement in community activities. As a young man he was actively involved in the Empire Sports and Social Club, serving as its secretary; his involvement in cricket, most notably as president of the Dominica Cricket Association and manager of the Dominica and Windward Islands teams, was well known, as was his active participation in the credit union movement.

"I was always interested in community activities," the former administrator told The Sun.

"So I said OK, I was not uninterested in this area because it was serving the community at the highest level…because of my involvement in cricket and bananas in Dominica, I became well known. So when the call came it was relatively easy to get involved," the retired MP reflected. Not long afterwards, James, Julius Timothy and Garnett Didier met at Didier's office and the seeds of the UWP were formed. Seven years later James led the party to victory, taking eleven seats in the 1995 general election.

His fall from power was even more rapid than his rise. After only four and a half years in office, the UWP was ousted by the DLP - with the support of the DFP - in a general election that was held six months early in January 2000.

James has told The Sun that while he would have liked to serve as prime minister much longer "because I believe our party did good things for Dominica," he does not regret calling an early poll.

"When you go to the people with six months to go or even nine months to go and you lose, yes, you are disappointed. But when you are making the decision you make the decision on sound analysis. I don't regret taking the decision, I regret the results, I am disappointed with the results, but I don't regret the decision," said the former prime minister. "We were campaigning on the basis that two parties were going against us, but the arrangements between the Freedom Party and the Labour Party made the difference."

Now, after five general elections and a by-election, after 25 years as an MP, there's a void in the House with James's retirement, suggests Athie Martin, a former minister in the DLP administration and now a UWP sympathizer.

There's no one in the upcoming parliament, not the government, not the opposition, with the depth of experience and "deep firsthand knowledge" of agriculture that James had, Martin told The Sun.

In addition, Martin said, James understood the role and the rules of parliament and how to function within these rules.

"He must be included in that group of persons who understood that while you have to operate within the rules of the law, the law was there to serve you and if you became a blind servant of the law….you would lose the ability to see the weaknesses of the law and how to operate on the edge," Martin explained. "And these will definitely be missed."