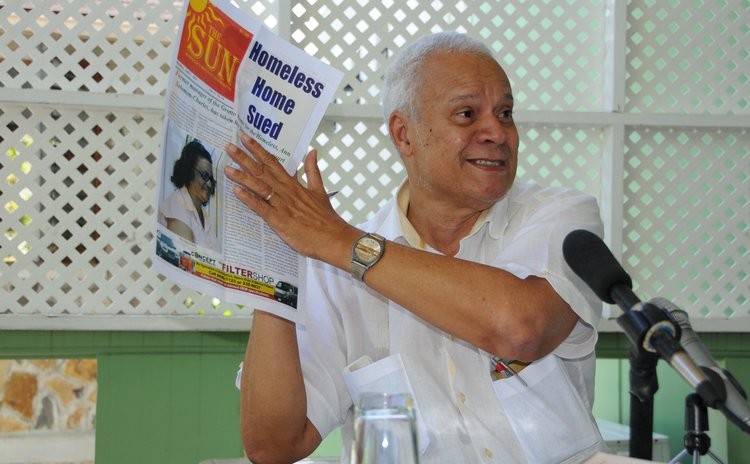 An argumentative Parry Bellot contended at a press conference on Wednesday that a case filed against the Grotto Home for the Homeless and others two weeks ago, by the former manager Ann Solomon-Charles, is "frivolous" and he blamed the police for dragging out an investigation that is taking much too long.

"It's over a year and we are still not getting a response … we are very dissatisfied with the police work there," Bellot said. "While the police was still investigating, this lady decided she was going to sue."

In its issue of April 7th 2014, the Sun reported that Solomon Charles had taken her former employer, the Community Hostels Inc. (better known as the Grotto Home for the Homeless) to court. As stated in the court documents, Solomon-Charles is seeking damages against Ainsworth Irish (president of the Grotto); Paul Green (vice president); Parry Bellot (public relations officer); Kamala Jno Baptiste-Aaron (host of "The Heng" talk show) and Island Communications Limited (Kairi FM) the broadcaster of the Heng.

Solomon-Charles' lawyer J. Gildon Richards claims that the management of Grotto "falsely and maliciously accused the Claimant of stealing from the Community Hostel Inc. monies in the sum of about $40,000 to $100,000". And, by that letter Board requested that the Commissioner should conduct a "criminal investigation into the matter."

Because of that request to the police, Solomon Charles was subsequently informed that an investigator from the Criminal Investigations Department (CID) wished to question her about the allegations made in the report to the Commissioner of Police. In addition, Bellot, on October 15, 2012, and Kamala Jno Baptiste-Aaron host of The Heng on Kairi FM caused further injuries to the character of the Claimant, the court documents stated.

The lawyer claims that all the Defendants were "reckless as to whether the statements were true and knew, or with the exercise of proper care ought to have known, that at the time of the said publication there was no, or no sufficient factual or legal basis for the said statements."

But Bellot argued at the press conference that the Board was justified in its request for an investigation from the police.

"When we found what was going on, we asked the police to investigate," Bellot said and the board even identified specific allegations that the police should look into. The police did investigate and presented a report to the Commissioner, who subsequently held a meeting with Grotto officials.

"He, the Chief, summoned his people and in my presence read part of the report which he said was totally unsatisfactory," Bellot told reporters. "He said so to me and the other senior people and therefore he's going to have another person do the investigation again."

But the deadline of three months for the completion of the second investigation, that the Police Commissioner set, has also expired.

"Quite frankly it's into the fourth month and beyond," Bellot said.

Asked why did the board make public statements against its employee when the results of the investigation were still pending, Bellot said the Grotto board was "getting pressure" from some of its donors.

"We felt we wanted to issue a public statement letting people know some of the basic things that were discovered and so on (since) a lot of what we do is based on trust", he said.

It seems obvious that the issue is mired in politics since Solomon-Charles is the wife of Norris Charles, the former United Workers Party (UWP) minister of trade.

"The board of directors of the Grotto, we are represented by both sides (government and opposition)," Bellot said.

It is difficult to discern whether the current controversy is affecting the operations of the Grotto, an institution that depends solely on donor assistance and financial help from the Government of Dominica. Before the Solomon-Charles case erupted the Grotto was already suffering from housing and other problems.

"We had a very serious cash flow situation. As you know everything in the community has gone down and we had one of our donor agencies that was restructuring and what not, "Bellot said. "We were under a little pressure to make ends meet but when you are doing God's work, you don't worry."

At the press conference, Bellot said he was not speaking for the Grotto board but in his personal capacity since Solomon-Charles sued him as well.