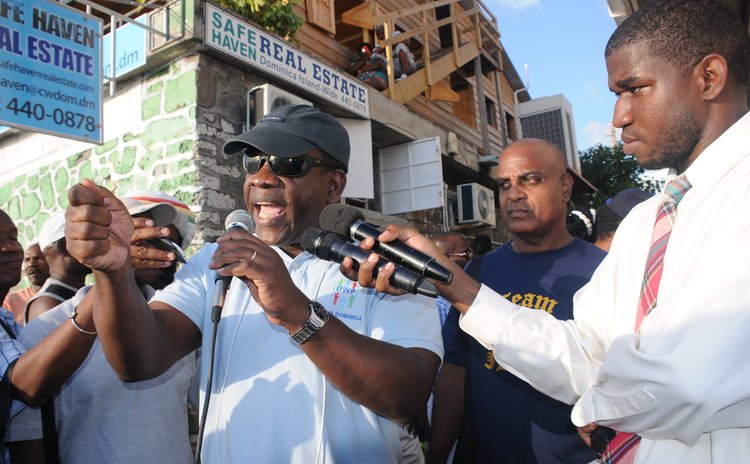 If you thought that the Dominica Freedom Party (DFP) was dead and buried, think again.

Of course, the current DFP is a mere shell of the former political powerhouse of the Eighties (1980-1995) and their support to the UWP today is more symbolic than a backing with significant numbers; nonetheless, the co-operation of the two parties for the protest confirms the truism that political affiliation, like tides, ebbs and rises with time. Linton said this morning that the two parties held a meeting on Sunday to discuss protest strategy and that it will be a peaceful protest.

Recall that about 17 years ago the DFP joined forces with Rosie Douglas's Dominica Labour Party (DLP) to defeat the UWP in the 2000 general elections. But the DFP/DLP coalition that ensued did not last beyond the first term of the DLP, from 2000 to 2005.

But significantly especially for the current Roosevelt Skerrit DLP, many DFP supporters remained with the DLP after the marriage with the DLP broke down.

Nonetheless, over the last few months die-hard members of the DFP have been attempting to breathe new life into the party and some people may consider Tuesday's protest, along with the UWP, its former arch- enemy, as a new dawn for the DFP.

In fact last week Thursday, the Skerrit administration may have assisted in "waking up" the DFP when the police arrested and charged a member of the DFP, Dr. Sam Christian for a statement that "inciting arson"; he made the statement at Goodwill in 2015. That arrest has spawned tomorrow's protest.

Over the past few days and weeks, the UWP has been calling on the Skerrit-led government to resign because of the discovery of foreigners of questionable backgrounds, who have ended up in problems with the law, and who owned Dominican diplomatic passports including Iranian fugitive Ali Reza Ziba Halat Monfared.

This morning Linton said he is aware that a local branch of an international bank has "shut down" the Government's Citizenship by Investment (CBI) account. Linton speculated that the bank may be concerned that money generated by the CBI "may be tied to money laundering"; or the bank's reaction may be connected to a fear that CBI funds may be linked to financing of terrorism schemes.

"Our passport dollars are no longer trusted," Linton said.

But members of the Skerrit administration have reacted to these accusations by throwing their support behind the Prime Minister.

For example, Dr. Kenneth Darroux, the minister of health said on State-owned DBS radio this afternoon that the Grand bay and Petite Savanne branches of the DLP "condemn the recent action (of the UWP) to destabilise" the country; he said the DLP branches are "fully satisfied" with Roosevelt Skerrit's efforts at rehabilitating Dominica's economy after Tropical Storm Erika in August 2015.