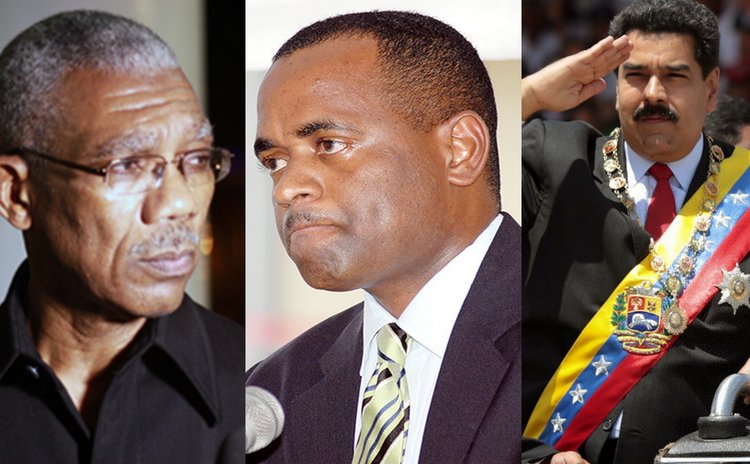 If the reports are true we can call him the mediator-in-chief. Prime Minister Roosevelt Skerrit, brokering a settlement to the fiery dispute between Guyana and that Caribbean Community (CARICOM) country's neighbour, Venezuela.

Georgetown has responded with anger to a decree issued by the Venezuelan president, Nicolas Maduro, on 26 May, annexing all of the waters off Essequibo, including the oil-rich Stabroek Block, where the American oil giant Exxon Mobil declared in May that it had found a "significant" reserve of high quality crude oil. Maduro has since withdrawn the decree, replacing it with a new one, but Guyana is fuming at Caracas's annexation of two-thirds of its territory.

Guyana's president, David Granger, raised the issue at the last meeting of the CARICOM heads of government in Barbados earlier this month, and it occupied a lot of the leaders' time. Maduro was scheduled to attend the talks but instead sent his executive vice president, Jorge Arreaza, who met the leaders in caucus.

Media reports in Barbados during the summit indicated that Skerrit and his St. Vincent and the Grenadines counterpart, Ralph Gonsalves, were asked to mediate talks between the two nations.

It was not clear if the mediation was during the caucus with Arreaza, or if the intent was to have the two leaders intercede at a later date. The reports were never confirmed and the final communique made no mention of it.

Still, political observers find the prospect intriguing, and many said Skerrit's close friendship with Maduro could be key in any such talks. However, the fact that the Dominican leader is in thrall and in hock to Caracas and is the standard-bearer of Petro-Caribe could prove troublesome, some observers said.

Among those watching with interest is the Barbadian political scientist and pollster, Peter Wickham, who said the row between the two South American countries posed a fascinating dilemma for the Dominican leader.

The prime minister has openly stood in Caracas's corner in the past, often joining the army of supporters on battlegrounds favourable to Venezuela. Like last December after the US announced sanctions against the South American country's government officials accused of repressing and using "significant acts of violence or serious human rights abuse" against persons involved in anti-Maduro protests.

In that case the battleground was an ALBA summit in Havana, Cuba, where Skerrit boldly threw his weight behind the Venezuelan leader, as well as Cuba.

And on 17 March of this year, Skerrit was among 11 ALBA heads of state attending an emergency summit in Venezuela, who expressed solidarity and "unconditional support" for Venezuela and called on the US to "immediately cease its harassment and aggression against the government and people of Venezuela".

The Dominican leader has been less than abstemious with support for his fellow CARICOM state, which has accused its neighbour of hostility by issuing the decree. He has also not openly taken Venezuela's side in this dispute, saying at a ceremony on 10 July to observe the 10th anniversary of Petro-Caribe, that the row would not affect Dominica's relationship with either of the two countries.

In a statement on the same day, the Venezuelan ambassador to Dominica Hayden Pirela vowed that his country would not give up "a territory that has always been our own" and ostensibly blamed Guyana for the dispute.

"Venezuela has never been a warlike country, and with Guyana we only wish to take the dialogue route. We have not violated any international agreement. Venezuela has been patient throughout all these years and we will never give up a territory that has always been our own.

"We only want, and we have made a call to the Government of our sister Cooperative Republic of Guyana, to respect the International Agreements. The Geneva Convention signed in the year 1966 states that no action or activity should take place during the validity of this agreement and Venezuela is not the country who has disrespected that," said the ambassador.

Prime Minister Skerrit skirted the issue of ownership of the disputed territory, focusing instead on the ambassador's reference to dialogue, while referring to the 116-year-old dispute as a "misunderstanding".

"As the ambassador says that we can find and we will find solutions through dialogue, through diplomatic discourse, and I believe that we will find a way through that medium to seek to address the present misunderstanding between Venezuela and Guyana. We continue to play our part in ensuring that, as friends of all, we can bring the sides together to have a positive solution to the problem," the prime minister promised.

It was not immediately clear what Skerrit meant when he said Dominica would continue to play its part, but Wickham told The Sun finding a balance could prove bothersome.

"It's a difficult act to balance because the interest of Dominica has to be maintained with Petro-Caribe and he has to maintain his relation his CARICOM (colleague)," Wickham said.