Pearl's Cuisine: a serving of success! 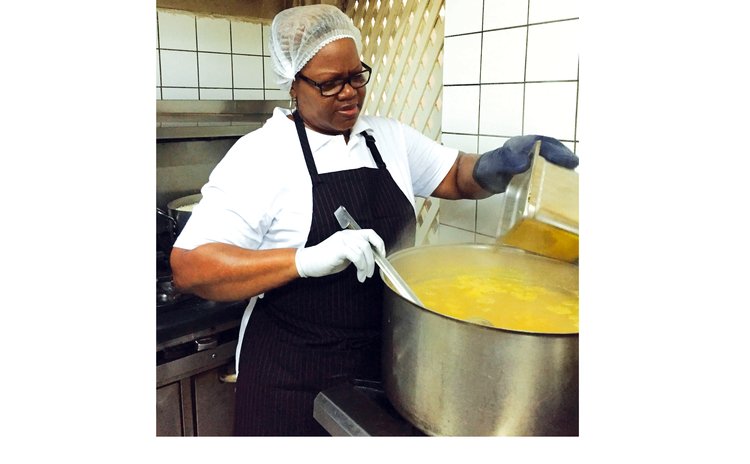 Take lavish handfuls of love. Add a marinade of dedication and talent. Garnish with lots of energy and attention. What do you get?

You get Pearl's Cuisine, one of Dominica's longest standing and most successful restaurants that has served legions of satisfied customers for decades.

Owned by Pearl Pinard, Pearl's Cuisine has become synonymous with local foods— evident by what's on each customer's plate and by the influx of tourists directed there to find genuine Dominican cuisine.

Pearl's Cuisine started out at the Sisserou Hotel in 1986 when the hotel was in its heyday. There, Pearl started to build her reputation in the food business.

She remained at the Sisserou until 1992 before moving to Castle Street, Roseau. From there, the restaurant moved to King George V Street with a dining room upstairs and a take-out section downstairs.

Today, the restaurant is housed at the Sutton Place Hotel, another long standing Dominican business. One section is strictly for 'take-outs', while the adjoining section is a dining area for meals with full service.

Pearl's daughter, Lisa Pinard-Volson said that her mother's mother-in-law, who was a caterer, exposed Pearl to cooking on a grand scale.

Before that though, Pearl was cooking from the tender age of eight.

Her mom, a district nurse, spent a lot of time out in the field and gave little Pearl the responsibility of preparing the family meals.

"She used to put things there and tell us we have to do this…my sister had to do the ironing…mine (duty) was cooking," Pearl recalls.

"She would start the hard part of [preparing the meal]…and I would continue…I always liked the cooking."

Pearl says she learnt the basics of cooking from her mother and the finer points from her mother-in-law. Her mom also taught her how to prepare wild meats.

"I like to have people enjoy what they eat and I like the feedback…so that is why I am always there myself to make sure everything is ok…"Pearl said.

Pearl opened her restaurant in Castle Street in 1992 after securing a loan for the furniture and utensils.

Intense work went into converting a garage into a take-out section over a short period of time.

"At one time I said, 'boy, I am not going to continue, you know…that thing is too much hard work'," she said.

But when she gets those feelings, Pearl thinks about her staff and her customers who appreciate her food.

It's satisfying knowing that people look for Pearl's Cuisine in particular. And often, when visitors ask for recommendations for local foods, they are sent to Pearl's.

Her daughter Lisa underscores the fact that the restaurant focuses on local dishes prepared with local ingredients.

Her mother has a farm where she raises livestock and all the plants, vegetables and the herbs for the restaurant.

This is good, not only in terms of quality but in terms of cost control since the prices of fruits and vegetables fluctuate regularly on the market.

Each day, the menu features a meat —lamb, beef, goat, pork etc. — a poultry dish and a fish dish.

But the type of dish varies according to what is sourced. Whether fish is stewed or grilled is determined by the type of fish caught.

She says about 25 years ago, Pearl's Cuisine started serving callaloo soup and broth on Saturdays. Lisa says her mother actually introduced this sort of local fare, which was an immediate hit.

Customers clamored for it and often had to bring their own bowls as disposable soup containers were scarce at the time. The broth and soup are still sought after on Saturdays.

Lisa says her mother is well known for the preparation of suckling pig which she does with an elaborate and meticulous process.

Pearl is also known for preparing exquisite crab backs, which she does without preservatives. Crab backs are one of Pearl's signature foods, and she doesn't stretch the crab meat by mixing fish or other types of food into it.

Another signature dish is her lemon meringue pie, and she is one of the few persons here who can make crostato shells which she fills with seafood or other fillings. Pearl's mother-in-law gave her the recipes for the crab backs and crostato shells, Lisa says.

Though Pearl's story is one of hard work and eventual success, she is at work every day, from 7:00am until 6:00pm, despite having back and knee problems.

"She's never out of that kitchen, she's always in there. She's still very much a part of everyday cooking…" Lisa says.

What's also interesting is that Pearl still has some of her original staff from the Sisserou days.

One is Mack Seaman who was with the restaurant from day one. He remembers the early days at Sisserou when tourism was doing well and business flourished.

There were barbecues with a live band and sometimes fashion shows on Wednesdays. These events were always successful, he remarks.

Even then, Pearl had 17 employees, he recalls, adding that work started very early in the morning because they were providing breakfast for the workers installing a new phone system on the island.

He described the relationship he has with Pearl as one of mutual respect and friendship.

So, just as Pearl keeps her customers, she keeps her employees.

She is certainly a business stalwart worthy of note as Dominica observes its 37th Independence anniversary.