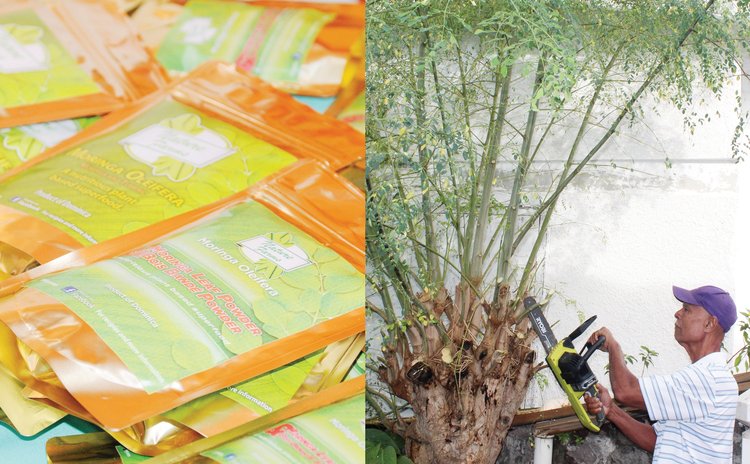 Joseph "Joey" Peltier has been growing Moringa for some time now having first received six seeds from a friend in Guyana. His relationship with Moringa grew while he lived and worked in Barbados.

"We established over 100 tress at Layou Park and as our production increased we began to change the presentation and packaging. Our primary market being Dominica, Jolly's- Astaphan, ACS, Whitchurch were our primary market," Peltier said.

As the demand for the product grew, the business, Nature Farms, has established a dryer in order to produce a more wholesome product

The Dominica Import Export Agency (DEXIA), he said, greatly assisted in establishing a market in the French territories.

"As it grew we grew with it as we believed that our product was market driven," he said.

Peltier continued: "We now grow turmeric and mix our product with such, also with bois bandé. We have essentially reinvested all we have made and so we can be happier even while we do some shipment now in the UK. But we could do much better as we aim to establish a factory and get the necessary help to so do with the purchase of an industrial grinder."

Moringa is a plant that is native to the sub-Himalayan areas of India, Pakistan, Bangladesh, and Afghanistan. It is also grown in the tropics. The leaves, bark, flowers, fruit, seeds, and roots have medicinal properties.

Moringa is known as the tree of life, because every part of the tree is used-the seeds, pods, flowers and leaves are used as food; while the bark, roots, stems, and the rest of the tree are used for making tools or as folk medicine.

"My entire family home, including my wife, are very involved in the work associated with the production of the Moringa…besides the moral support they do play in major role along with my business partner Mr. Shillingford," he said.

"About 75 to 80% of our products are exported…Dominica is a small market for us and our aim is to go big like Dominica Coconut Products (DCP). We have about 100-150 trees out there and we also go out and do the harvesting."

Peltier has been using an old family house near his home where he hopes to set up a factory in the near future.