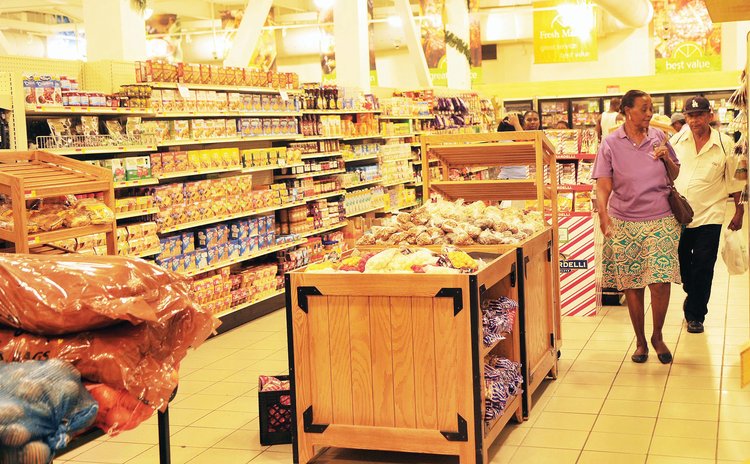 Shoppers at a local supermarket

At the start of the year, Harleen Felix says that adding bac-and-neck to her shopping list was never an option. But given the new price tag of $30.00 for the 10 lbs. chicken leg quarter, which was a few months back sold at under $25.00, the mother of three says that she has been forced to change her shopping habit.

"I buy the same items pretty much every week, and right now I am spending an extra 60 to 80 dollars for the exact items," she told the Sun. "Between the cost of food, the cost of fuel — it's hitting everyone hard, and it's not like our salaries are increasing to balance it out."

Her experience is being shared by shoppers across the country who are facing sticker shock on almost all types of groceries.

In a country of few employment opportunities and where the minimum wage is EC$8.00 an hour for security guards, but between $7.25 and $7.50 an hour for most categories of workers – juveniles and trainees are paid as little as $5.67 per hour, shop assistants earn $6.75 and home assistants between $200 and $250 depending on whether they also get meals or live-in – even those fortunate enough to have a job struggle to make ends meet.

As a consequence of the rising cost of food shopping, Maria Laurent says the box of cereal which her son consumes in under a week will have to be swapped with crackers, a much more economical option.

"He also likes food like corned beef, canned sausage, tuna, all of these are now luxurious items. Once I get home I have to have a discussion with him on the sacrifices which we will have to make to ensure we're able to survive throughout the month which is necessary right now," she added.

The price inflation of food is not only restricted to the supermarkets. At the Roseau market, one vendor justified her decision to increase her avocado pear to $10.00, by stating, "a little pack of turkey wings I was buying for $5.00 is now $10.00. Pear go up too! Ten dollars for my pear."

At several restaurants in and outside the city, customers are also reporting a price hike.

Upon entry to "Kish Meals" in Canefield, the sign at the door reads, "Dear valued customers, please note that of the drastic increase of goods and commodities, an extra $3.00 has been added to all lunch meals, 0.50 cents to stuff bakes and chicken and $1.00 to all juice."

A similar sign announcing the increase in food has also been placed at two popular food entities, Flavours Grill in Roseau and Drive-By in Portsmouth.

Speaking to the Sun, one of the owners stated that jacking up the prices for the meals, was the only option to ensure sustainability at her establishment.

Julius Timothy, the proprietor of three ACS supermarkets in and near the capital, told The Sun in a previous interview that in the last six months, prices have skyrocketed by an average of 25 percent, which he blamed on escalating international freight prices.

"The freight from China has more than doubled and all international prices are up," revealed Timothy.

"There's nothing they can do about it; they'll have just to do what they can with what they have. There's not much," advised the local businessman. "It's difficult because unemployment is really high, and people don't really have much money."

During our quest for possible solutions to ease the current struggle that many Dominica customers are experiencing, the Sun turned to the Dominica Consumer Protection Association as well as the Ministry of Trade but was unsuccessful in speaking to a representative of these establishments.

Government has yet to publish up-to-date information on the cost-of-living index. The most recent information available on the statistical office's website was published in 2009 but reflects information from the 1997/1998 household expenditure survey of 1,000 homes across the ten parishes.

To quote, Justine Burnette, "unless a drastic change is made soon, more Dominicans will be forced to migrate in search for greener pastures."