Peter 'Bushman' Green: I love being in the bush 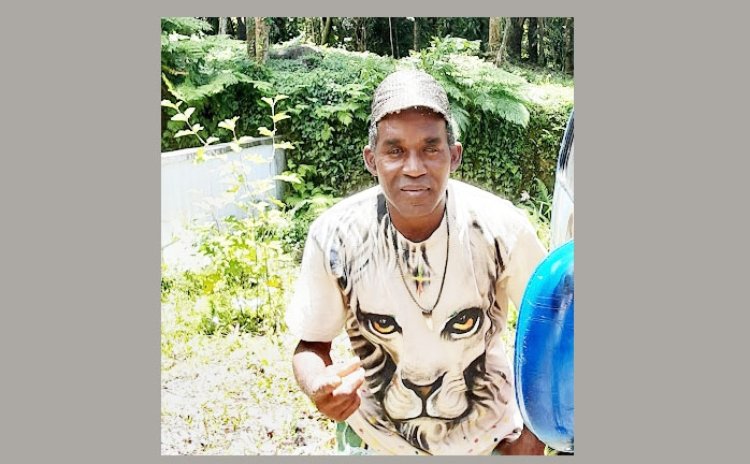 Dominica is the land of flowing rivers, majestic waterfalls, iconic mountains, and countless species of flora and fauna, all of which speak to Peter 'Bushman' Green and called him into being one of the island's veteran tour guides.

Green, who grew up in Laudat and lives in Newtown, has been hiking the island's trails for almost three decades, this year making it his 26th year in the business.

'Bushman' recounted to The Sun his introduction to tour guiding.

"I used to work in a hotel as a bartender, from bartending I went to the kitchen and from there I decided to take some visitors to the Boiling Lake. They were Germans and Germans like to hike," Green said.

That was his first taste of the great outdoors as a hiking guide. However, he did not go fully into the guiding business until a few years later.

Green, a painter by profession, utilized this talent both at home and abroad. But he yearned for his homeland and he returned in the early 90s to continue exploring her rivers, valleys, hills, and mountains.

"I left Dominica in 1990, and went to Guadeloupe to do some painting for two years. As soon as I returned, I went back to the hotel, then I decided to leave that and went to tour guiding and hiking," he said.

The 'Bushman' made sure to inform himself on just about everything Dominica has to offer its hiking visitors. His knowledge of the wildlife species - and their multitude of benefits - grew immensely over the years.

"Before I really went into it, I did some research about plants, flowers, etc. Because sometimes guests like to know those things. I am not a botanist but I know about plants," Green recalled.

In addition to this love for nature, the exercise that comes with this lifestyle keeps him invigorated to hike the paths almost every day.

Green's favourite trail is the Boiling Lake. Middleham Falls, Boeri Lake, and Freshwater Lake are popular choices for those with whom he hikes. He is also an expert on the Morne Diablotin trail, though this one is less traversed.

"I like seeing the lush green forests," he said. "It gives me a lot of meditation. I already encountered a big boa constrictor on the trail. I see a lot of parrots, I like to hear the sounds of the birds, forests, and rivers. I just like the adventure."

He also shared some of his more memorable hikes, especially when the weather changed during the journey.

"Once I had to carry a lady on my back," Green remembered. "We went to Victoria Falls and on the way back it started to rain and the river came down rapidly. Another time I was going to Boiling Lake, at Breakfast River rain started so we had to wait a half-hour for us to cross it."

'Bushman' wants to see more individuals get involved in this side of the tourism business but warns they need to have patience for the task.

"I would encourage other people to get into it but they have to have a lot of patience - once I spent 13 hours taking a couple to the Boiling Lake - they also have to know how to deal with people with attitude if that is the situation," Green said.

He wishes to see upgrades to two prominent attractions in the Roseau Valley to increase accessibility for visitors and locals.

"Middleham Falls and Trafalgar Falls, there are big boulders to cross to get close," he said. "If Forestry could build a walkway or bridge, nothing big, it would help. Because some people really want to get closer but if you fall on those rocks, it's trouble."