JUMP BALL No. 67. By Arlington James 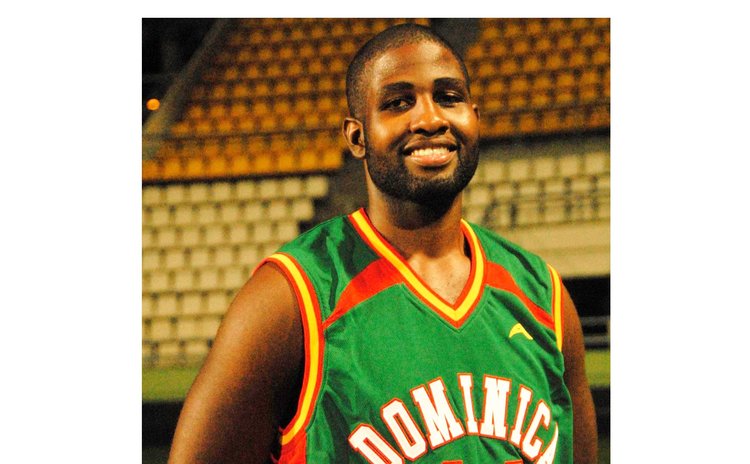 Sports often run in the family, passing from one generation to the next. In the case of Peter Ricketts, his Granddad was into cricket as a bowler while his Mum was a netballer.

The son of two medical doctors, Peter got introduced to the sport of basketball while viewing NBA games on local television in the 1980s. He boasts of having been an avid fan of Utah Jazz, but he did not begin his sports journey in basketball.

He first dove into the swimming pool. Later, with his height and agility he moved over to football as a goalkeeper. Next, he got into cricket, and subsequently settled on the basketball court.

Now standing at a burly 6ft 6in tall, Peter began playing basketball competitively at the Dominica Grammar School (DGS) with Skinner House in DGS' Inter-House League, and while at school he represented Dominica Grammar School in the Sports Division's Under-20 Basketball League. Interestingly, he never got selected for the Windward Islands 'Inter-Schools' Games.

Upon graduating from DGS Ricketts debuted in DABA's National League with Clouds Intermediate and assisted the latter win back-to-back league championships in 2003 and 2004.

Peter undertook the third leg of his basketball journey when he moved to Columbia International College (CIC) in Canada. With a twinkle in his eye, he revealed that it was while in Canada that his basketball prowess really developed. At CIC he would often practice for up to 3 hours daily, and although he did not play for the school, he played several friendlies.

He started off playing as a Centre at CIC, but even with his height he transitioned into a Shooting Guard, a move that seems somewhat unusual in Dominica's Basketball.

From Columbia, Peter moved to the University of Waterloo in Ontario to pursue studies in Computer Science. And although he was itching to play for the University team he was unable to do so because of certain restrictions. However he did get to showcase his kills in the TBA (Toronto Basketball Association) League with Nemesis.

Unfortunately, Ricketts' basketball development was set back somewhat when he tore the ligament in his left knee while in Canada. He noted, however, that before sustaining that injury he was able to do a 360º dunk, and revealed that prior to leaving the largest country in North America he played in the NBA 3x3 Summer League Programme in Toronto.

Upon returning to Dominica Peter re-entered the DABA League and returned to play in the Centre position with three teams. He resumed playing with Goodwill Starz in the 2nd level division, then moved up to Sign Man X-Men and remained with that Premier Division team for four seasons, assisting X-Men win a League Championship.

Peter's most recent move was to Falcons (Premier) where he played with that Pichelin team in the 2016 and 2017 DABA Leagues. He then helped Falcons win the first-ever Mackeson League Championship which was staged in 2019 by 767 Sports Club and the DABA.

Peter represented Dominica on three occasions: in the Sugar-Creole Basketball Festival which was staged in St. Kitts and Dominica in 2011 and 2012 respectively, and in a friendly tournament in Antigua.

Ricketts also played Off-Season basketball in the Pichelin League, and with Fond Canie Rebels in the Roseau Valley Basketball League.

Peter disclosed that the DABA teams that he enjoyed playing against the most are Blazers and Super Eagles, on account of their level of competitiveness. And the players who had the greatest influence on his basketball development were Johnny 'Legeh' Alfred from Marigot Sonics, and NBA player Tracy McGrady of the Huston Rockets.

The most points that Peter recalls ever scoring in a local game was 36, which he hit against Falcons in 2015 while playing with X-Men. He has so far received two basketball awards: MVP for DABA's 2012 Regular Season while with X-Men, and National MVP in Basketball for the 2012 Season.

Apart from contributing to the development of local basketball as a player Peter officiated Premier Division and Division I games, and performed a very short, unofficial coaching stint with Falcons (Premier). He also served as Basketballers' Representative on the Athletes' Committee of the Dominica Olympics Commission, and from 2019 he assumed the position of Vice-President of the Dominica Amateur Basketball Association.

Further, Rickets also helped organise an Olympic Day 3x3 Tournament in Roseau, and through his family business Optical Services, provided monetary contributions for that particular tournament. He also made donations of sporting equipment to some players and to the national league.

Peter Ricketts feels passionately that Dominica needs to begin focusing on 3x3 Basketball, and to increase the participation of women in the sport locally.