Petra Charles: Something about this island was meant for me 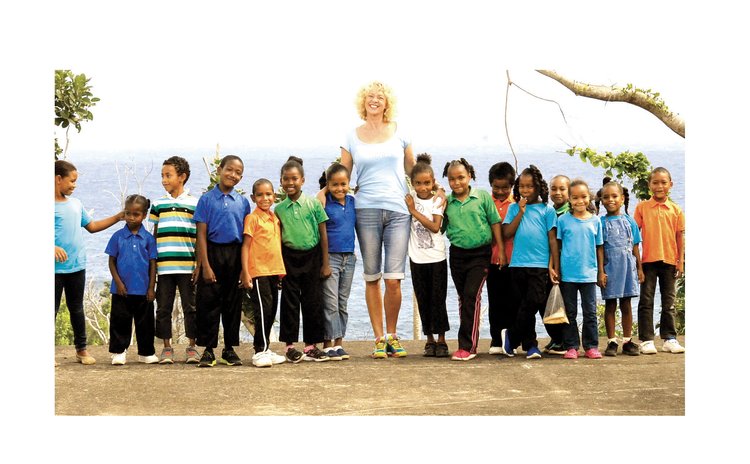 Petra Charles with children of the Kalinago Territory

A woman with a passion for Dominica's marine life, who describes the country as 'heaven', is happy to give back to the island she now calls home.

Petra Charles of Germany is the owner of Petra Tours and More, a company which organises tours for German cruise ship visitors and provides marine education in schools all over the island.

Charles, who worked with a German society for the conservation of whales and dolphins, first visited Dominica in 1999 upon the suggestion of a work acquaintance.

"I met a colleague who said 'you must visit Dominica; they have sperm whales in abundance.' I said 'I just came off the Dominican Republic.' She said 'no, it's an island called Dominica.' Back in 1999 it was difficult to find anything about Dominica online. I thought it must be so beautiful, nobody knows about it," Charles said.

Going back more than 20 years in memory, Petra recollected her first impression of Dominica.

"It was the most beautiful, captivating place I ever saw," she recalled. "I was well travelled and had seen other beautiful places. I kept saying something about this island that was meant for me."

That visit did not go as planned, but Petra was determined to make the most of her time in Dominica.

"During the first week, Hurricane Lenny hit and I could not go whale watching. All the other guests were evacuated from the hotel but I decided to stay and help however I could. This transformed my concept of my workaholic life. When I went back to Germany, I felt something had changed in my life and I did not know what," Charles said.

Petra's second visit was a few months later, to experience the island without a hurricane. She remembers when she finally saw sperm whales in Dominica's waters.

"Oh my God, I cried," she said. "They are majestic creatures and have this strong social bond. They are so gentle, peaceful, patient, and friendly."

However, it was the third trip in 2000 when she decided to stay.

"I was at Customs and forgot to fill in the 'intended length of stay' section. The customs officer joked with me about it. I wanted to stay three weeks, but instead wrote FOREVER," she said. "It was at that moment, it – my career, home, whatever I worked for – did not matter again. I unintentionally found a new home. Dominica gave me something totally different."

By August 2000 Petra wrapped up things in Germany and began her new life, in the new millennium, in Dominica. She spent her first few years with a family with whom she is still very close. She admits there was no culture shock on moving to Dominica.

"I was well informed and knew I was going to a different country with a different culture. And because I loved everything about Dominica, I was strong and determined about my decision. I do miss the abundance of cheese, cold cuts, and German bread, but I can easily live without it," she chuckled.

Apart from conducting private tours during the cruise season, Petra Tours and More contributes to Dominica in other ways.

"For the past 18 years I have been a member of a conservation society for dolphins and whales. The project in Dominica includes lectures about marine life and resident sperm whales, with the goal of raising awareness for environmental protection," she said. "We also conduct ocean cleanups and beach cleanups with the children and offer complementary whale watches. This is why I came to Dominica at first, my love for marine mammals and this is what I want to give back."

Petra's hope for Dominica is it maintains its lush and still untouched natural habitats, making it the envy of the world.

"I hope we all preserve and cherish this country so the ecosystems stay intact, without any destruction of the rainforest nor the marine life by man," Charles said. "I strongly believe that Dominica has the potential to be one of the few gems left on this planet, where you can enjoy a natural and peaceful life."