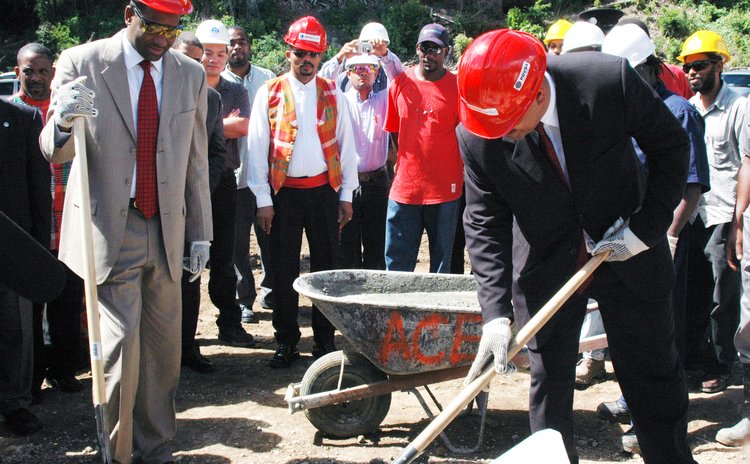 The common sentiment echoed by each speaker at the closing ceremony of the 10th Anniversary of the Petro Caribe Agreement was that Petro Caribe is here to stay.

June 29, 2015 marked 10 years since the initial signing of the Agreement, which would forever transform the socio-economic landscape of Dominica.

During those ten years Petro Caribe's presence manifested across the length and breadth of Dominica through the development of the Tan Tan, Soufriere and Scotts Head Sea Defense Walls, the upgrade of the Douglas Charles Airport, the erection of the Fishers Fuel Stations in Scotts Head, San Sauveur, Fond St. Jean, Roseau and Portsmouth, the construction of the Salybia Primary School and the Housing Revolution Program among others.

The Petro Caribe Energy Initiative launched in 2005 by former Venezuelan President Hugo Chavez, according to the Hon. Prime Minister, Roosevelt Skerrit was, "An initiative for economic cooperation and an initiative for integration."

The initiative would allow for the supply of Venezuelan crude oil to countries in the Caribbean region at discounted prices. Member countries, upon purchasing oil would pay a particular percentage of the oil within 90 days and the remainder over a period of 25 years with an interest rate of one percent annually. Part of the cost could also be offset by the provision of goods or services.

However, in the ten years gone, PDV Caribe Dominica Ltd. had become more than a mere fuel supply agreement that offered payment concessions for signatory countries. Petro Caribe developed a series of programs in the areas of tourism, education, health, housing, environmental sanitation, road networks, sports and agriculture and not forgetting the elderly.

The Prime Minister recalled, "When we first identified the black sigatoka in Dominica, the first call I got from anybody was from President Chavez. He said look we have had this problem in Venezuela and it is dead now and President Chavez mobilized his army, mobilized the ministry of foreign affairs, mobilized the Ministry of agriculture and sent a military plane to Dominica within 48 hours to deliver supplies to the Ministry of Agriculture to help fight black sigatoka here in Dominica."

He further stated, "Even during our own election [of] our PAHO Head, the Director, Dr. Carissa Etienne, the Latin Americans were at the fore front of the support to Dominica… and this was done not because it was Dominica, it was done because of the relationship that we had engendered with those countries."

So where was Dominica 10 years ago before the advent of Petro Caribe and ALBA? A question posed by Deputy Manager Paul Moses in reflecting on the years past.

According to Reginald Austrie, Minister responsible for Petro Caribe, "Ten years ago, through the vision of its founders, Petro Caribe transformed itself into a very important international institution and can be compared to any other global institution that exists and that serves us in this part of the world."

Additionally, Petro Caribe has created employment for over 30 Dominicans and according to Minister Austrie, "Over 4000 homes have been repaired through the initial contribution of 30 million dollars under the Petro Caribe Agreement."

Venezuelan Ambassador to Dominica, Hayden Pirella Sanchez reaffirmed the Government of Venezuela's commitment to Dominica, saying, "The Embassy of Venezuela is committed to continue working toward the development of Dominica…We will always accomplish our international agreement… For us Venezuelans, we are really proud of the legacy of President Hugo Chavez that continues to bear fruit. We have internal problems in Venezuela but those problems in Venezuela do not stop our commitments."

The Hon. Prime Minister expressed his gratitude to the Government and people of Venezuela, saying, "Our friendship and our fraternity stand strong and it shall withstand the test of time and the test of scrutiny. You can always count on us in Dominica as solid comrades, solid supporters and solid friends because in Dominica we believe in friendship…and we have to ensure we do everything possible among ourselves to allow the vision of President Chavez to continue to bear fruits and flourish and we have an even greater responsibility to him to ensure that his legacy and his vision continues to thrive."

As for the future outlook of PDV Caribe, General Manager, Henry Blanco says, "In keeping with the theme, 'Energy is union and independence,' Petro Caribe Ltd. will soon transition into providing LPG in bulk. We are focused in our quest to ensure that every householder in Dominica is a holder of one PDV 20lb LPG cylinder, the cheapest and the most affordable on the market thereby expanding our LPG market…"

"We continue to work, keeping you people foremost in our minds. According to the words of Calypsonian Hunter, Petro Caribe is here and by the grace of God it's here stay."