PetroCaribe in trouble due to US sanctions against Venezuela 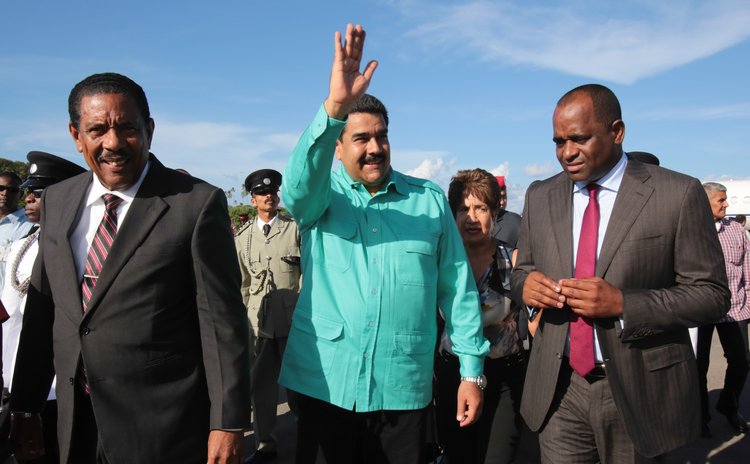 Venezuela's Petro Caribe, the oil-on-preferential-terms scheme that was introduced to Dominica and several other Caribbean countries by the late Hugo Chávez in 2005 is in trouble due to current sanctions imposed on Venezuela by the United States.

"So yes, it's affected," Ambassador Savelli said. "It's affecting PetroCaribe, is affected PetroCaribe as a branch of PDVSA because if PDVSA is not able to fulfill the payments around the world, because the accounts are blocked, so we cannot get the shipments on time. We cannot get the raw materials that we need to develop the products up to the Caribbean countries. There are delays; yes it is in trouble. If PDVSA is not able to do payments PVD Caribe is in trouble".

He added optimistically: "But we're taking care of the situation. As I said it is not that we have surrendered. We will not surrender. We are fighting with finding ways. We have friends around the world; we have China, and we have Russia".

At the press conference the Venezuelan Embassy introduced # TrumpUnblockVenezuela, an

international campaign supporting the Venezuelan people. Similar press conferences were held throughout the world to highlight the impact that the US sanctions are having on ordinary Venezuelans.

"Between December 2014 and April 2019 the US Government has issued a law and seven executive decrees that punish and penalize the Venezuelan economy," said Ambassador Savelli. These sanctions, the ambassador said, include: Blocking and confiscation of financial assets; Prohibition of negotiation of PDVSA's debt; Increase in country risk and financial costs; Prohibition of operations with gold; Confiscation of assets (CITGO and assets of PDVSA); Sanctions on oil trade; Sanctions against the Central Bank of Venezuela and fines and administrative penalties for trade.

"The US strategy is aimed at causing suffering to the Venezuelan population," said Ambassador Savelli adding that the US wants to "undermine the Venezuelan government's model of equitable and social justice, founded by Hugo Chávez with the Constitution of 1999 and maintained by the only president democratically elected in Venezuela, Nicolas Maduro Moros".

The US sanctions also aim at forcing President Maduro to cede power to the nation's opposition leader, Juan Gerardo Guaidó Márquez, the President of the National Assembly of Venezuela who declared that as head of the national assembly he was president based on an interpretation of the Constitution since Maduro's election in 2018 was fraudulent.

The US and about 50 countries around the world support Guaidó as president of Venezuela.

"The Trump administration's recent sanctions on Venezuela's state oil company have made it difficult for the government to sell its main commodity, oil," writes Anatoly Kurmanaev in the New York Times of May 17, 2019 in an article titled: "Venezuela's Collapse is the Worst outside War in Decades, Economist Say".

The author suggests that the recent US sanctions only made a bad situation in Venezuela worst: the economy was already collapsing even before Chávez died.

But together with the American ban on trading Venezuelan bonds, the US administration has made it harder for Venezuela to import any goods, including food and medication.

"We are fighting a savage battle against international sanctions that have made Venezuela lose at least $20 billion in 2018," The New York Times said Maduro told supporters in a recent speech. "They are pursuing our bank accounts, our purchases abroad of any products. It's more than a blockade, it's persecution."

"The seriousness of this crisis situation induced by the economic blockade, leads us to declare ourselves in a permanent campaign to demand the end of the economic blockade against Venezuela, together with their brothers, brothers, friends and friends from all corners of the planet," said Ambassador Savelli at last week's press conference.