Petter St. Jean: An experience I shall never forget 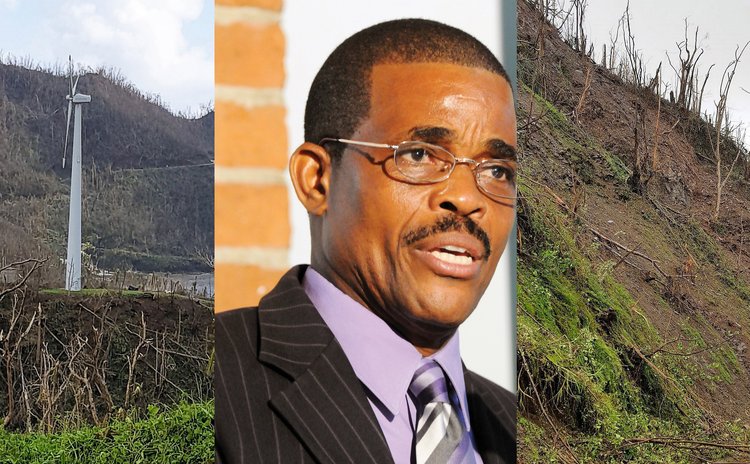 St Jean ,centre and Hurricane Maria destruction in the East

Petter St. Jean, the parliamentary representative for the La Plaine constituency and the Minister for Education in the ruling Dominica Labour Party administration, along with five villagers left La Plaine and braved the slides and fallen trees into Roseau after Hurricane Maria devastated Dominica on 18 September 2018.

St. Jean described his experience on that marathon walk as "incomparable" to Hurricane David.

"I experienced hurricane David in 1979. I was a fifth former in high school and at that time, I thought that was the worst storm but the experiences after Hurricane Maria are incomparable," he said.

St. Jean said on Thursday 21st September, three days after Maria, he organised a group of five young men and they decided to venture "into the unknown to try to bring word to our people out there that there was life in the South East."

"We left the upper section of La Plaine and made a stop at the Police Station and we were told two police officers had ventured out and had not returned. Having heard that some guys got scared and wanted to abort the trip. However, we proceeded and crossed what I thought was the largest number of trees and slides that I had ever experienced," he said. On their arrival in Morne Jaune and Riviere Cyrique they saw how completely the area was devastated.

"On arrival at Morne O'Delices we encountered a slide of proportion that I am not able to describe but we had already made up our minds that our destination was Roseau having left La Plaine at 6:45am," he said.

He continued: "We maneuvered our way across this massive slide. By that time we were getting hungry, thirsty and tired. It was extremely hot and we were feasting on fallen coconuts and grapefruits. We made it to the Tarish-Pit junction since by then some sections of the road were cleared. There, we got a ride since a small track was made and we reached the Sultan Road. From there we negotiated our way through trees and other debris. It was not so bad from what we had previously encountered.

"From Sultan we made it to Warner and we received a shock on arrival. The place was littered with fallen trees and we had to climb over and beneath them which took hours before our arrival into Warner. It was then way past 2pm and we were informed by people that we had to get into Roseau before 4pm because there was a curfew. We did not know that since we were in the bush and had no form of communication with the outside world. So we hurriedly tried to make it into Mahaut and on arrival on the Belfast Bridge, I got some phone signal which enabled me to send a message to my daughter in Barbados who posted it on Facebook so the people in the Diaspora knew there was life in the South East. We got a ride to Roseau and Wow! What hit our eyes was touching," St. Jean said.

The journey he recounted was rough, tiring and hard.

"We were so exhausted that we went to Morne Bruce where I had an apartment which was totally destroyed. I sought and obtained police escort to take us to Pottersville where we stayed overnight by a friend. I was up at 3am to start our journey back to La Plaine. We had money for food but it was useless...shops were damaged and closed. We got a ride to Roger and from there we headed back but this time through the Imperial Road. We got a ride on a police vehicle to Morne O' Delices and we walked the rest and got back to La Plaine at about ten minutes to 11am on that Friday morning," he said.

"This is an experience that is indelibly marked in my memory. We in Dominica suffered the worst that any storm has dealt a nation. We are a strong and determined people. The road from Delices to Roseau was cleared in one week after the experience. This is a learning exercise. We did it then and can do it now. For me, as I think back, I say it has made us a stronger people and if we could survive Maria there is nothing known to man that we cannot survive and bounce back," St Jean said.

He added that he had to endure the strong winds of Hurricane Maria at his home. The winds blew away part of his roof at 8:06 pm.

"I went to the downstairs after the eye (of the hurricane) with my son and family just past 12am. We were able to rescue 17 residents who were in dire distress. What an experience I shall never forget," he said.