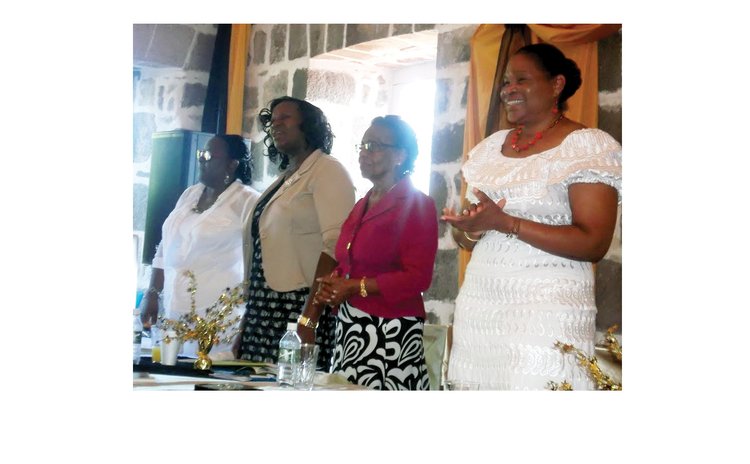 Women of Honour at Conference

"I remember well the things I disliked about that time of my life; never knowing what I was going to eat on any given day since there was often no food in the house; wearing torn hand me downs and never having any items of clothing or shoes that were really my own, or fitted my tall slender frame; shoes were always too small and hurt my feet so I frequently wore none, then work and more work," said Yvonne Berthe Garraway Alexander as she spoke at the Sixth Phenomenal Caribbean Women Symposium on January 31, 2015.

The symposium organized by VF Inc and the Division of Gender Affairs allowed four women from different walks of life to share their life stories with the hope that the hardships they went through before obtaining their life successes will inspire women in today's society.

Alexander who was born in Guadeloupe and is presently a member of the Dominica Police Force, has never allowed her early childhood challenges to hinder her journey to success. Alexander is currently the most senior female officer in the Police Force in age, service and rank.

Alexander who spoke on the topic: "How I Got There" explained her living conditions after the death of her mother and grandmother and how her life was when a woman named Ma T took her in. Though she encountered several challenges, she is grateful for Ma T for taking her into her home.

"I virtually raised myself. Apart from general ground rules about the times I needed to be washed and indoors at nights, commands about not allowing any dirty dishes to be left undone or any bucket to get empty before refilling, regular beatings for peeing in my bed (crocus bag and old clothing spread on the floor at nights), verbal abuse about staying out of sight when not needed; since I was so ugly I had no recollection of anyone saying anything to me about life generally," said Alexander.

Although Alexander endured hardships as a child she noted that the social environment allowed her to be exposed to values that shaped her upbringing.

"I am a beneficiary of a village raising a child. Every adult in the neighbourhood could scold a child. I learnt good manners and etiquette by observing the behaviours of some families I considered role models and from the books I read," she said.

"I also remember well the many memories of despair; of sitting alone and thinking how miserable my life was and one thought kept repeating itself in my mind; 'one day I am going to get big and have a family, and have a home,' stated Alexander.

With that thought remaining in her head Miss Alexander performed well academically all through primary and secondary school until she joined the Police Force on December 27, 1975.

"Thoughts of a career in policing began to really take root by then and with that a determination to move up the ranks. My thought originator determined that this could only be accomplished if I were academically qualified," she said. "I registered for all training courses that were offered by the government including the adult education department, the youth development division and the social centre. Before long I had acquired a few more CXC passes and was ready for UWI. Starting with the Certificate in Business Administration, I gradually advanced to completing the MBA in Public Sector Management Stream in 2000.

The other women who spoke at the symposium was Janice Amour, the owner of one of Dominica's well known beach front properties, the Anchorage Hotel. She spoke on the topic: "A life of Adventure Opportunities and Purpose".

Armour was followed by Jenifer Jacqueline Johnson, a woman of faith out of Barbados, who delivered a powerful message in relation to her life experiences. Her topic was entitled "Jenifer has Gone Home".

The last phenomenal woman who spoke at the conference was Legal Secretary at the law firm of Williams and Horsford Chambers, Althea Luke, who spoke on the topic: "Dare to be a lady with a loving heart, a mother on a mission, a parent of purpose and a wife with wisdom".

The symposium took place on January 31, 2015 at Cabrits National Park in Portsmouth.