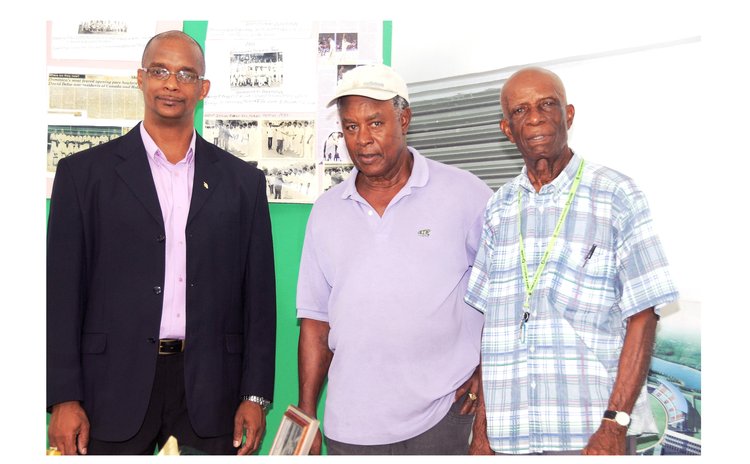 Phillip Alleyne speaks about sports with obvious affection, evident by the soft glow in his eyes as he reflects.

The special place in his heart for sports has been honed by years of involvement, stretching all the way back to boyhood days.

And Alleyne is not shy to share his opinion that no one else has done more for football and cricket in Dominica than he has. Alleyne took us down a memory lane generously paved with accomplishments and accolades that have marked his unique career in sports. His memory lane is also rich in experience that straddles cricket and football, as a referee, umpire, official selector and athlete.

In the early days, Alleyne played football in the position of a centre forward for Notre Dame which was the leading team in first division football. He also played for Thunderstorm and Arsenal. While playing for Notre Dame, he represented Dominica in two matches against the battle ships HMS Snipe and HMS Glasgow.

He also played club cricket as an all-rounder.

After retiring from actual play, Alleyne headed the Dominica Cricket Umpires Association for many years, until his retirement in 1995 when he gave way to Lennox Abraham.

In football, he played a key role in the formation of the referees association and served as its president until his retirement in 1995. Alleyne has also served as an executive of the Dominica Amateur Sports Association (DASA) which was the umbrella body for sports back in the day.

He and Simon Roberts became the first two Dominicans to pass the exams to become first class umpires in 1972.

He has also served as the Area Vice President of the West Indies Cricket Umpires Association with responsibility for the Windward Islands, an office he held until retirement.

Alleyne managed the Dominica football team –captained by Clem John -- in 1965 when they went to St Lucia, and the national cricket team, captained by Augustus Gregoire, in 1969. As a cricket umpire, he officiated in two One Day International matches-- WI versus Australia in St Lucia in 1978, and WI versus Australia (non-official series sponsored by Kerry Packer) in Dominica in 1979. He also officiated at 14 Shell Shield matches, standing with top umpires of the day.

The veteran sportsman said it was under his guidance and leadership that umpires and referees associations were formed in 1964 and 1968.

In 2010, the Dominica Football Association honoured Alleyne with a Lifetime Achievement Award for his contributions to the sport.

For Alleyne, one of his greatest achievements has been his discovery of Billy Doctrove, who made him proud by becoming one of the elite umpires of world cricket.

Alleyne remembers that significant day well. He was in a bit of a spot since the umpire earmarked for a match about to start had not turned up.

Young Billy, still a schoolboy, was standing under a tree in the Botanic Gardens. Alleyne decided to ask the lad to do the umpiring until the real umpire showed up. Doctrove did not have umpiring experience but agreed readily and ended up umpiring the entire match.

Impressed by the talent demonstrated that day, Alleyne encouraged Doctrove to pursue a career in umpiring.

Memories of that day are still fresh for Doctrove as well. He even recalls Alleyne giving him a cricket law book the following Monday after that match.

Alleyne was quite persistent, he said, even going to his home to discuss the matter with his parents.

Doctrove said Alleyne encouraged him, moulded and groomed him through his career.

And it was a sentimental moment for both men when Doctrove got his first international umpiring appointment in 1998. "He was the one who made me an umpire. Without him, I wouldn't be where I am now," Doctrove said unhesitatingly.

He and Alleyne remain close friends and Doctrove even considers him a second father.

Last year, the West Indies Cricket Umpires Association celebrated its 50th anniversary and recognised Alleyne for his sterling contributions to umpiring. And it was Alleyne's pleasure to receive the plaque from his protégée and then Vice President of the Association, Billy Doctrove.

But he had been getting accolades before that. Alleyne was awarded the Meritorius Service Award for his service to sports and was inducted into the Dominica Sports Hall of Fame in 1988 on the occasion of the island's Independence anniversary.

And it was a proud moment for him in 1972 when he was rated as one of the best umpires in the West Indies by the captains of the Shell Shield teams.

Today, as Alleyne looks back, he says that his contributions to cricket and football are the pleasures of his life.

He has lived to see technology expand to envelop sports, but is not altogether comfortable with every aspect of this. Alleyne believes umpires' decisions should be final and should not be subject to electronic verification.

He also sees a different attitude among sportsmen and women. Alleyne muses that we now live in a different world where money matters more than the love of the sport in many cases. The athlete's commitment to sports is lacking today, he said sadly. He thinks there is need to step up on training.

Alleyne wistfully remembers the days when footballers kicked a wet ball at 6:a.m. at Windsor Park, serious about practicing and getting it right. People did what they had to for the love of the game back then. Like the cricketer who he remembers walking with bat on shoulder from Grand Bay, just to play in Roseau.

He advises athletes to develop discipline which Alleyne said is an essential element in sports.