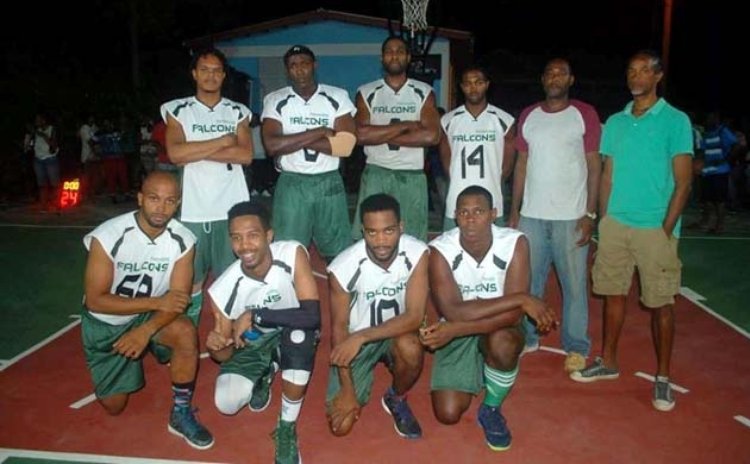 Part I of Pichelin's Basketball Culture began presenting the progression of the participation by Pichelin's teams in Dominica's national basketball league, from Pacers to Pistons to one of the two Falcons teams.

Yannick Régis' aggregate-scores of 181 Pts were the second highest in the 2013 Regular League. He burnt Black Hawks' nets with 40 white-hot points, and his was the 4th highest individual player-score overall for the 2013 basketball season. Further, on four other occasions Yannick celebrated as a member of the "30-39 Club", having netted individual-scores of between 39 and 30 Pts on those occasions.

The year 2014 saw Pichelin's team return to DABA's top division when Falcons were promoted to the Premier Division, which featured 10 teams then.

That year, David Xavier sank 5 Three-Pointers vs Warriors and Kijuan Thomas amassed 16 Three-Pointers in the Regular League. Falcons converted a grand total of 38 from behind the arc, the 2nd highest number of 3-Pointers among all teams in the 2014 national league.

Further, Kijuan Thomas and Ramal Carbon amassed aggregate scores of 187 Pts and 171 Pts respectively, while Kijuan got "inducted" into the "29-35 Club" on three occasions, with game-scores of 33, 30 and 29 Pts.

The 2015 season saw 8 teams in the Premier Division, with Falcons assigned to the South Zone. That year, teams played each other in their zone twice (except X-Men, who played 3 times), then engaged the 4 teams in the other zone once.

For their 11 games played in the 2015 Regular League, Falcons ended with 5 & 6 Win-Loss Records, including a 26 Pts blow-out of Tigers (88-62). Interestingly, among their other encounters Pichelin's Falcons had 1 win and 1 loss by 3 points each, and another win and a loss by 2 Pts each - an indication of the fighting spirit of that team.

Pichelin's and Falcons "scoring machine", Kijuan Thomas, sank a total of 269 points (24.45 Pts/gm) in his 11 games, and his aggregate-score was the highest among all players in DABA's three Divisions combined. Edmund Williams Jr. had contributed 119 Pts to Falcons' grand total in the Regular League.

Unfortunately, even with their 5 wins and 6 losses, Falcons did not qualify for the 2015 Premier National Play-Offs.

Falons Premier won the Regular League Championship and also emerged Runners-up in the Premier Division National Play-Offs. However, their DI "juniors" won only 15.385% of their Regular League games, one of which was by default.

Falcons Premier Division Team competed against 7 other teams in 2016, with the eight teams engaging each other in two rounds of Round-Robin competition in the Regular League.

Falcons Premier performed almost flawlessly in the 2016 Regular League, winning 13 of their 14 games and losing only to CrossOver, by 2 Pts (75-77). In their 11 actually played games, they amassed aggregate-scores of 934 Pts and conceded 721, for a goal-average of 1.295; their other two games were won by default.

Coincidentally, when Falcons met CrossOver in Round 1, they won by 3 Pts (58-55). However, in Round 2, Falcons lost by almost the same margin by which they had defeated CrossOver, i.e. 75-77.