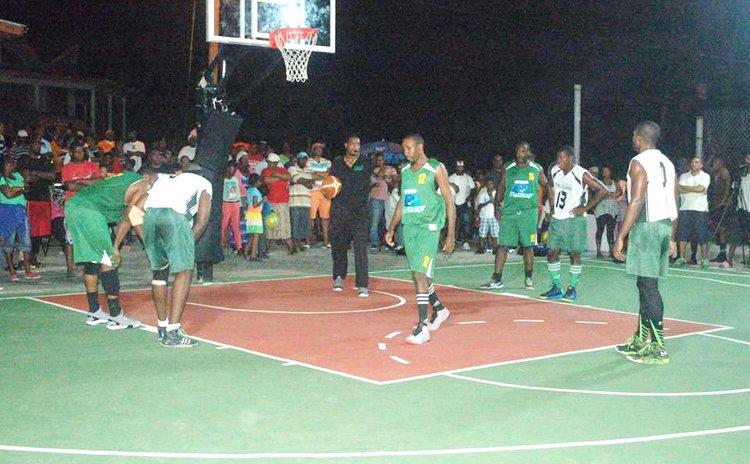 Part III of Pichelin's Basketball Culture presented on Falcons Division I team; "It's A Family Affair" in reference to groupings of brothers and cousins in Pichelin's basketball; and the Pichelin player on Dominica's 2016 Under-16 team.

Jumpstart is a collaborative programme between telecommunications giant Digicel and the NBA in the USA. Through this programme, basketball clinics are brought to the Caribbean, and bring together hundreds of young basketballers, both boys and girls, from across the region.

Those players also represented Dominica in the basketball segment of the annual Windward Islands Schools Games (WISG), and all performed creditably; Kijuan and Edmund were Dominica's MVPs.

It must be noted that those players (except Sherwin) were members of Secondary Schools then Inter-Schools basketball teams that competed in the 3rd Level Men's Division, then the 2nd LMD respectively of the national league. Dominica's teams at the WISG over the last 9 or so years came from those two teams while Kohath played with Falcons DI in DABA's League.

It must be noted further that Yannick also served as Assistant Coach to Dominica's Basketball Team in the 2015 WISG.

Pichelin Players on 2012 National Under-23 Team: Two players from Pichelin, viz. brothers Khalim and Kijuan Thomas, were selected to Dominica's Under-23 Team in 2012. Both were members of FashionLine Falcons (2nd LMD) at the time.

Pichelin has staged two editions of their basketball league, the most recent ending prematurely due to Hurricane Maria in September 2017.

The teams which participated in the 2017 PiBL all came from southern Dominica, more specifically Bagatelle, Dubique, Grand Bay, Bellevue Chopin, and of course hosts Pichelin.

PiBL 2017, which was sponsored by Dr. Kenneth Darroux, Parliamentary Representative for the Petite Savanne Constituency – to which Pichelin is assigned politically – was organized in two zones. Pichelin's three teams sported yellow, green and blue uniforms respectively.

Pichelin Teams in Other Community Leagues & Friendlies: Pichelin has not only participated in the national basketball league and staged its own community basketball league, but has also competed in other community leagues and engaged some teams in "friendlies".

In terms of "friendlies", teams representing Pichelin have travelled far and wide around Dominica to engage other village teams, then host most of those teams, in friendly games on an away-and-home basis.

To date, Pichelin's basketball teams have taken on their peers and counterparts in friendly encounters at Grand Bay, Marigot, Mahaut, Paix Bouche, Scott's Head and Soufriere. Interestingly, some years ago a team from Pichelin also engaged a team comprising Dominica State Prison inmates in a friendly, on the State Prison grounds at Stock Farm.

Pichelin's teams have also participated in 3-on-3 Basketball Competitions in Grand Bay, Soufriere and a few other communities.

Young Falcons in Under-17 League: Pichelin's YOUNG FALCONS was one of the teams which participated in DABA's first-ever Under-17 Basketball Division. By the time Hurricane Maria brought the competition to a halt, Young Falcons were already 5 & 0 (Win-Loss).

Pichelin's Basketball Facility: Over the years, Pichelin has had only a single basketball court. This is located near the Community Centre and Roman Catholic Chapel, and is accessed via a small bridge.

The facility has been upgraded twice, most recently in 2016, through the efforts of the Parliamentary Representative and the village's basketball organizing committee. Although still an outdoor court, Pichelin's basketball facility, now nick-named "The Bird Nest", was hailed as the most modern basketball facility in Dominica, boasting of glass boards, an electronic score-board, a newly resurfaced court using coloured materials, limited seating, etc.

It is worth noting that a few national league matches have been played on Pichelin's court from the 1990s to just before the onslaught of Hurricane Maria in September 2017.