JUMP BALL No. XVI:A Peek at Local Basketball Then and Now 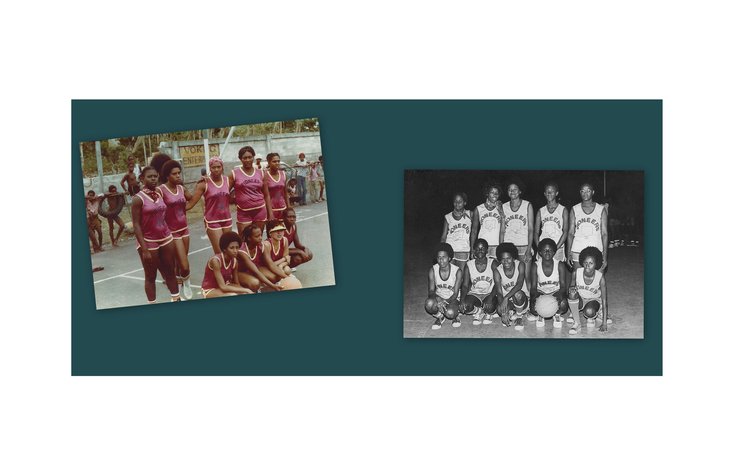 Women's sports in Dominica at one time were limited to rounders and netball. However over the years the situation improved considerably, with women's/girls' competitions in previously "all-male" sports (e.g. football, cricket) now featuring on Dominica's annual sporting calendar.

Four decades ago a group of women, most of who at the time were sporting Afro hairdos of various sizes, and who some would consider to have been extremely brave, decided to break the status quo as far as local women's sports was concerned. They formed a team called Pioneers - appropriately named, one may add – and created history by venturing into one of those previously "all-male" sports: basketball!

The New Chronicle of 7th May 1977 highlighted the team's entry into the basketball league when the paper reported, "In the first match of the evening (Wednesday 4th May) Pepiz Pioneers, the first female team in the history of basketball in Dominica, registered their first victory of the season..." And so, that year the trail was blazed for women's basketball in Dominica.

Pioneers comprised mostly active netballers, some of whom had even represented The Sisserou Land in that sport at the highest level. At the time that they made their basketball debut, there was no Women's Basketball League – and there would be none for a couple more years after. And so the ladies, determined to play 'ball and prove a point, were assigned to Division III (or Junior Division) of the national basketball league, to play against all-male teams. Originally they played in blue, but a few years later they changed their uniform colours to red.

In Pioneers' inaugural season the teams against who they played were Dominica Grammar School Jets, St. Mary's Academy, Back Street Magicians, Pros Junior and Lakers. Later on, while still in the Division III, they engaged new entrants to the Junior League such as Police Sports Club and others.

On a netball court, Pioneers' ladies would have been playing in positions such as Goal-Shoot, Centre, Defence, Wing Attack and Goal Attack. Now into basketball, they then had to quickly adjust to the new player positions of Forward, Guard and Centre on the basketball court, and where every member of the team defend, play offence, and can shoot!

Although the ladies on Pioneers had to put up with a bit of negativism in their early days as a women's basketball team, even from some (male) basketballers, they were very determined, and are very grateful for the support that they received from Harks, Flames and some members of Ambassadors – three Division I basketball teams of the day. Connie and "Small C", who were jointly interviewed for this article, reiterated their gratitude to those three teams which have all long disappeared from the local basketball scene.

Throughout their life-time, Pioneers was coached by a number of active basketballers. Augustus Harris and Edgar Robinson - both of whom later became Dominica's national basketball coaches - and brothers Rolston and Algernon Lawrence, were Pioneers' first coaches. Alphonso Etienne and Lennox Jervier – both formidable national players in their heyday – also gave voluntarily of their time to assist these young ladies. They received further assistance from Carlisle Elwin and David Winston - both members of Ambassadors then - who played among the girls in training/practice matches.

And while the ladies would also sometimes practice among the men, Pioneers' coaches sometimes would often put them through some rigorous training and fitness programmes. Such programmes included ball-handling, dribbling, shooting, jumping, and running laps around the court, or even from Windsor Park to Copt Hall and back.

Forty years later, Alice Jno. Jules vividly recalls those tough practice and fitness sessions under the direction of their coaches. However, she was quick to admit that she did learn quite a lot from those sessions, and some of the moves – including fakes - that she picked up from playing among the bigger and more experienced male basketballers helped enhance her netball skills.

While playing in the Junior League, it was somewhat a baptism by fire for Pioneers as they sometimes received some sever "shake-up sessions" from their male opponents. For example, in the 1977 League they received a 47-point blow-out from Back Street Magicians (79-32), and were handed a crushing 84 point defeat from St. Mary's Academy (118-34); SMA more than tripled the ladies' score in that match.

In spite of the roughing up that Pioneers ladies received at the hands of the more skilful and athletic young men and school boys in the Junior Division, those revolutionary ladies had reason to smile when on 4th May 1977 they tasted victory for their first time. That night they defeated Dominica Grammar School Jets by a meagre score of 28-19. But that was one of only two games that the team would win in Division III.

Pioneers' other victory in "Juniors" came some two years after the first, and tasted even sweeter this time around when they defeated Police Sports Club in 1979! Interestingly, my informants disclosed that in that particular encounter one of Pioneers' players, Rosalyn "Souwi" LaRocque, had accidentally injured a Police player who was "caught off-guard".

Possible questions that may have arisen as a result of that bloody incident are: "Was that Pioneer charged with an Unsportswomanlike or Flagrant Foul?" "Was that civilian charged with battery against a Police Officer?" Or, "Was there simply a No-call by the referees?" Certainly the latter because that was just a basketball game, with the lady playing a bit aggressively and probably wanting that basketball more than the unsuspecting police officer!

And, still demonstrating that they sometimes had what it took against some male counterparts, Pioneers also defeated Aloe Clippers in a friendly match at Soufriere.

Interestingly, Ursula Ophar played with Pioneers when she was only 14 years old and was their youngest player. However, physically the two most robust players on that team were Anthea Pierre and Germaine St. Luce (deceased).

After multiple seasons in the Junior Division, and performing far from favourably, but understandably so, Pioneers' presence in the League inspired other young women from near and far to get into the game, which led to DABA introducing a Women's League. And that is what Pioneers were eagerly looking forward to as their fortunes changed dramatically… for the better!

Pioneers' opponents in the Women's Division in those days were Pros Sisters from Grand Bay; a team from Portsmouth (which also comprised netballers); BJ Nets (named after the team's coaches, Barry & "Jockey") from Marigot; and Micheles - another team from Roseau which comprised several netballers including Marlyn Destouche, Deborah Gerard, and others.

Connie and "Small C" were all smiles when they noted that Pioneers won the first Women's Basketball League Championship. They disclosed further that for a while they never lost a match in that Division, and "they used to beat the other teams soundly".

Pioneers went on to claim League Championship honours in the Women's Division for consecutive years until the entry of Celtics into that Division, when the new team immediately began to dominate the Women's League. Celtics was also made up of senior netball players – including Jennifer Nanton, but Alice recalled vividly that their new rivals played a completely different style of basketball from Pioneers, with lots of high, over-head, netball-style lob passes, etc.

Away the court and the sweaty uniforms, Pioneers girls stuck together like sisters. Connie and "Small C" recalled that after playing a basketball match regardless of the outcome, or merely being spectators at a game, the girls would "go for a lime" and have a "night out" at Night Box Disco in Pottersville, or at Warehouse Disco near the Canefield Highway.

Pepiz Pioneers competed in the national league for about seven years, and the sponsorship package which they received included uniforms, shoes, socks and registration fees. Interestingly, according to two former members of the team, the only item of clothing that they did not receive as part of the sponsorship was underwear. The ladies appreciate Pepiz' assistance and support, and sincerely thank Sheridan Gregoire for having had faith in their team.

Connie and "Small C" noted, with some regret, that although Pioneers won the Women's Championship on a few occasions, they never received any trophy from the league organisers. However, they felt quite proud to have been part of a team that produced four of the five members of an All-Star Select Women's Team. Alice Jno. Jules, Cornelia Prosper, Ursula Ophar and Anthea Pierre were the selectees from Pioneers.

It should be noted too that Alice regularly top-scored in her games, and she was voted Most Valuable Player (MVP) of the Women's League on several occasions, and "Woman Player of the Year" in 1978.

It may also be of interest to note that Pioneers ladies were holding, or went on to hold some important job positions such as Senior Sports Officer, Accounts Officer at the Ministry of Education & Sports, Senior Tariff Clerk, Senior Accounts Clerk, Agricultural Officer, and Court Administration Clerk in the Department of Justice Canada. A few also migrated.

Pioneers raised their bouquets and graciously curtseyed out of Dominica's basketball scene around 1984, but only for their team's name to reappear on DABA team rosters several years later. This time, the name was being carried by an all-male team which remained active until 1999. One member of the new Pioneers, Bernard "Kiwi" Thomas, had been playing basketball from 1966 and is a pioneer of the game on Dominica (See Jump Ball Part XIV).

Well, ladies, you created history and left your mark. Thanks for blazing the trail for other young women in Dominica's basketball.

Thanks to all those who contributed to the production of this article. Additional information obtained from archived newspapers. Photos Courtesy: Cynthia Jno. Jules. Special Thanks to Yannick Bethel at Government Printery.