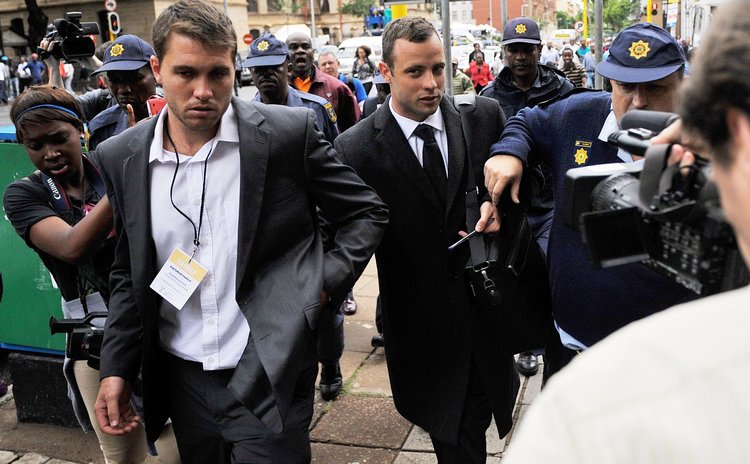 Pistorius, who shot and killed his girlfriend Reeva Steenkamp in 2013, was in 2014 found guilty of capable homicide and slapped with five years in prison after he explained that he mistook Steenkamp for an intruder at his house.

However, the prosecution appealed the capable homicide verdict and in December last year the Supreme Court of Appeal found him guilty of murder and referred his case back to the High Court Judge Thokozile Masipa for re-sentencing.

Members of Pistorius family and those of Steenkamp including her father Barry and mother June, listened with keen interest as Scholtz recommended a non jail sentence for Pistorius.

Scholtz described Pistorius as a depressed post trauma victim whose mental state has so much deteriorated that his current condition requires hospitalisation.

"His psychological condition has worsened since he was evaluated in 2014. His fall from grace was no doubt traumatic.

"It is my considered opinion that further imprisonment would hamper his development. Sending him to prison would not be psychologically and socially constructive," Scholtz told the court.

However, in his cross examining, lead prosecutor Gerrie Nel tried to poke holes into Scholtz testimony.

Nel said, "In your report you are biased towards the accused to give a report that is best for the accused in terms of sentence. Is that what you tried to do?"

However, Scholtz denied this, saying, "What I tried to do is to present the court with this person in the fullest extent so that the court can see the person who is being sentenced."

Miles Bhudu from the South African Prisoners Organisation for Human Rights told Xinhua that Pistorius should go back to jail for the murder he committed.

"Our advice to Pistorius is that let him go in there and serve his sentence. He must come to terms that he has got a responsibility to serve a sentence and stop being a cry baby.

"He must go to prison and encourage other offenders that there is no perfect crime let alone a perfect murder," Bhudu said.

However, Preshiela Sookay, who is part of the members of Worldwide Supporters of Oscar Pistorius who protested outside the court, disagreed, saying that Pistorius has not been fairly treated by both the media and the justice system.

"I would like to see him get house arrest. I do not see the difference of him going to prison because that is definitely not going to bring Reeva back.

"He has suffered a lot. His whole life has changed. There is no going back from what happened to him. The media has tarnished him. He is just a broken man?" Sookay told Xinhua.

Pistorius sat in the dock and listened quietly as the defence and prosecution argued on the first day.

Pre-sentencing arguments will continue until Friday with both the state and the defence expected to call more witnesses. Once the attorneys conclude their arguments, Jugde Thokozile Masipa will have to decide on the number of years Pistorius will spend in prison.

In South Africa, a murder carries a mandatory life sentence with a minimum of 15 years.

Pistorius has already spent one year in prison and many months on parole.