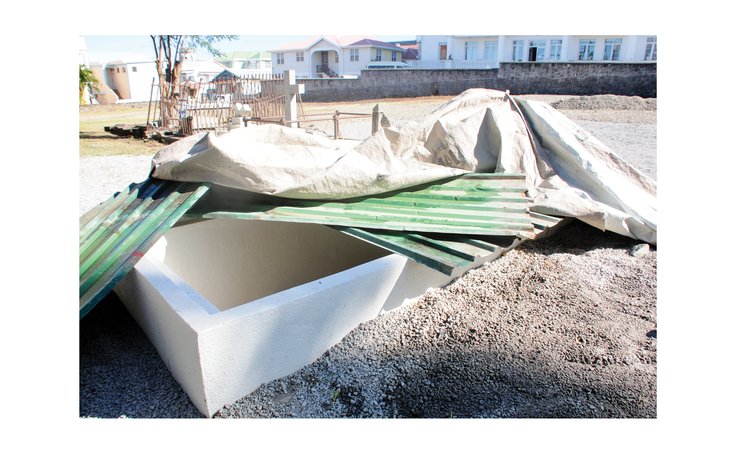 Patrick Roland "PJ" John, Dominica's first prime minister, is to be laid to rest in a tomb on the grounds of the hurricane-damaged 200-year-old Anglican Church in Roseau, the Sun can report.

Last week a large group of workers of the National Employment Programme (NEP) was frantically cleaning the grounds of the Anglican Church, power-washing the walls of the building, scrubbing the old graves, pouring and spreading gravel in the yard located to the east of the church building.

The tomb, in which John's coffin will be interred, has been built in a small, old graveyard that contains about nine other graves.

The new tomb was requested by Desiree, John's widow.

There's one other tomb on the grounds of the church but the inscription on the thick marble covering has become incomprehensible. There are also the graves of Canon P.K.P Bolton, rector of the Roseau parish who died in 1937; president Eldridge; Henry Alfred who passed away in 1851 and Charles Arthur Shand of England (1851 – 1909) and his wife Alice (1853-1910) from St. Kitts.

Dr. Lennox Honychurch, the historian said in the book "The Dominica Story" that the Anglican church was built in 1820- two hundred and two years ago- at a cost of 65,000 pounds. It was destroyed by Hurricane David in 1979 and four years ago by Hurricane Maria; the roof of the building has not been repaired.

Patrick John served as Dominica's first Prime Minister from November 3, 1978, to June 21, 1979, after leading Dominica to political independence from Great Britain. Prior to independence, John served as Premier of Dominica from 1974 to 1978. He had previously held several key government positions including Deputy Premier, the government of Dominica said in a press release issued on Friday.

"John served as Member of Parliament for the Roseau North Electoral District/ Roseau North Constituency from November 1, 1970, to April 27, 1980, and as Parliamentary Representative for St. Joseph from July 1, 1985, to February 20, 1986," the release stated. "Three days of national mourning have been declared from Monday, September 27, 2021 to Wednesday, September 29, 2021, and flags will be flown at half-staff on all public buildings during that period".

The statement added that the lying in state of the late Patrick John will take place on Tuesday, September 28, 2021, from 11: 00 a.m. to 2:00 p.m. for specially invited groups and the general public at Forecourt of the Windsor Park Sports Stadium. Due to COVID-19 protocols, a maximum of ten persons will be allowed to view at a time.

The body will also lie in state on Wednesday, September 29, 2021 from 9:00 a.m. to 12:00 noon at the State House Conference Centre for parliamentary and government officials. The funeral service will be held at the St. Gerald's Cathedral Chapel in Roseau commencing at 2:00 p.m., followed by burial at the Anglican Church grounds.

One of the dignitaries who will be expected to attend John's funeral will be His Excellency President of Dominica Charles Angelo Savarin who, as the secretary-general of the Civil Service Association (CSA) led a collation of civil society forces to overthrow John's Dominica Labour Party (DLP) administration in May, 1979.